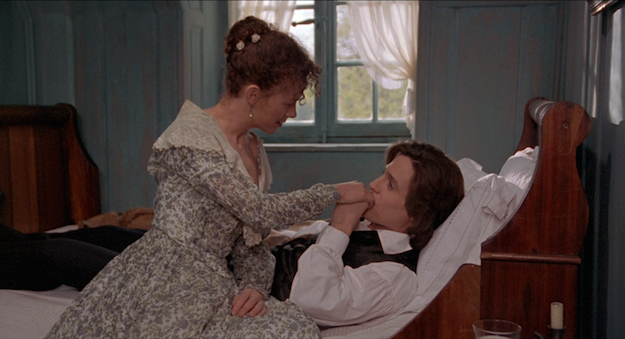 This exclamation, delivered by a young girl in the first scene of the 19th Century-set romantic comedy Impromptu, is the earliest clue that this flick is not going to be nearly as prim and delicate as its gauzy cover art would suggest.

Written by two-time Oscar winner Sarah Kernochan (Marjoe) and directed by her husband James Lapine (Six by Sondheim), this 1991 film imagines the first meetings of lovers George Sand (the young girl seen in the beginning, played as an adult by Judy Davis) and Frédéric Chopin (Hugh Grant). Madame Sand, as she is known, is the famous novelist and iconoclast, dressing in men's clothes, smoking in public, and carrying on with any number of lovers. Chopin the Romantic composer, in comparison, is meek and foppish, stricken constantly with illness, but possessed with a gift for crafting beautiful melodies that cause even the worldly Madame Sand to swoon.

Taking a cue from the characters' respective appearances, the film plays out largely as a sex-reversed take on the typical romantic comedy. Smitten George pursues the pretty Chopin, who is put off by her manner as much as he is quietly attracted by it. Circumstance keeps them apart until the third act.

In the film's relatively more farcical first half, we follows the exploits of a group of artists who are invited to take up a two-week residency at the country estate of the Duchess and Duke D'Antan (a slightly daffy Emma Thompson and a very harrumphy Anton Rodgers). The guest list is a randy crew consisting of Chopin, his dear composing chum Franz Liszt (Julian Sands), Liszt's baby mama Marie D'Agoult (Bernadette Peters), painter Eugene Delacroix (Ralph Brown), George of course, and -- much to her chagrin -- George's former lover, the writer Alfred De Musset (Mandy Patinkin).

George hopes the occasion and semi-secluded locale will allow her to woo dear, sweet Chopin, but things do not go exactly to plan. She pens a love letter and gives it to Marie to deliver, but the jealous woman rips George's name off the correspondence and signs it with her own instead. Then, to further spoil the mood, George's most recent spurned lover, Felicien Mallefille (Georges Corraface), crashes the party and challenges Alfred to a pistol duel because he assumes George must be getting back together with him.

Director Lapine's roots in legit theater are particularly apparent in this first half. You can see it in the way he ably juggles his ensemble cast as they bicker, carouse, try to shtup, and succeed in shtupping within relatively close quarters. You can also see it in the way he lets certain performances (*cough* Peters and Patinkin *cough*) go surprisingly broad. I agree with the decision to err on the side of comedy rather than on the side of drudgery, but the tone of the film wobbles unsteadily in some of these passages.

The second half of the film takes place in the months after this fateful gathering and has an overall more earnest tone. We are introduced to George's infirm mother, played by Anna Massey, who makes a powerful impression in her short amount of time onscreen. We also get to see George try all sorts of different tactics to get through to Chopin, from coming on strong and stalking him like a smitten man would to the extreme opposite, softening her look and starting to wear dresses again.

Impromptu is a delight. The story is breezy and undemanding without sacrificing the wit of its characters. Judy Davis is pleasantly Katharine Hepburn-ish in her realization of the sly, tough, and passionate George. At this point, Hugh Grant has not quite perfected his awkwardly open-hearted Hugh Grant persona, which means that his Chopin has a floppy-haired sweetness but also a believably guarded demeanor. Mandy Patinkin -- even though I might have just made a slight dig at him -- is tremendous fun as a boor who drowns his broken heart in booze.

Impromptu is thankfully much smarter and sillier than the stuffy costume drama one might suspect it to be at first glance. 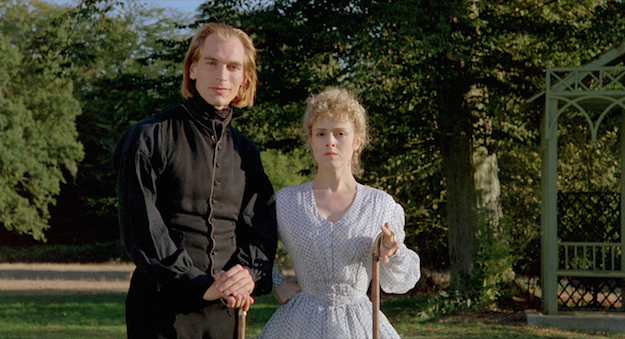 The Video:
This AVC-encoded 1080p 1.85:1 transfer is very strong. It boasts excellent clarity, lots of fine detail, and a satisfying film grain structure. Not much noticeable print damage. Strong colors and contrast, with skin tones looking accurate. It's a winner!

The Audio:
The DTS-HD MA 2.0 stereo audio mix is also very strong. Dialogue is prominent and clear. The music, which is mostly Chopin with a bit of Liszt, is effectively rendered and layered into the sound mix. No subtitles.

Final Thoughts:
I decided to watch Impromptu because of its excellent cast, expecting they could make any biopic tolerable. Well, the film is much more than tolerable. In fact, it's a frequently hilarious delight. Don't let the period setting scare you. Highly Recommended. 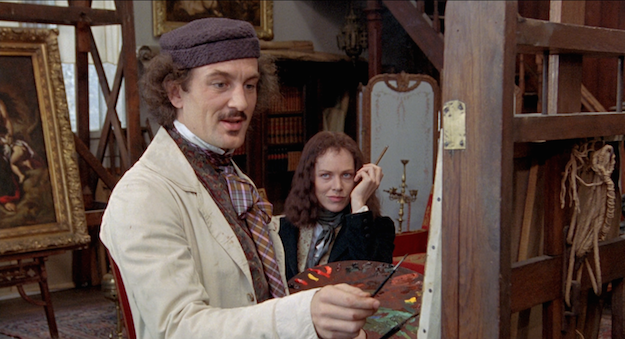