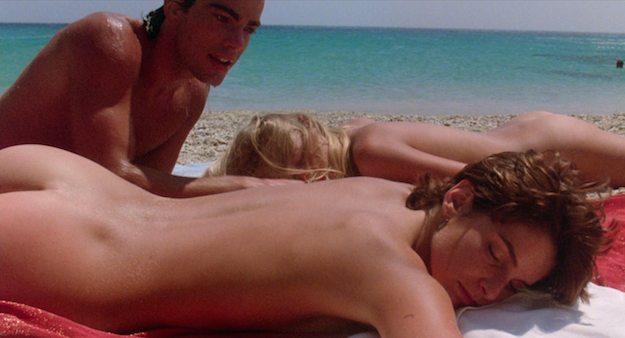 Writer-director Randal Kleiser's Summer Lovers is much better than a nudity-heavy American ménage à trois romance from 1982 has any right to be. Rather than being a slice of randy, raunchy exploitation, the flick is by turns charming, thoughtful, and, yeah, romantic.

Peter Gallagher and Daryl Hannah are Michael and Cathy, two clean-cut American kids spending their summer on the Greek island of Santorini. Like the hordes of young international tourists we see overrunning this island, Michael and Cathy are looking for a good time. Cathy wants to break away from the perception that she is a "goody two-shoes," so she reads books about imaginative sex, ties Michael up, and drips candle wax on him. Michael wants to break out sexually as well, but he doesn't find his outlet in a book. Instead, he becomes mildly obsessed with an exotically uninhibited French woman (Valerie Quennessen) holed up in a villa across the way. After not-so-subtly stalking her, Michael convinces the woman to spend the afternoon with him and they go to a nude beach, where Michael starts to loosen up a little bit more.

Of course, Michael ends up sleeping with this quietly intelligent beauty; he fumbles a compliment afterward by saying that having sex with her is like riding a horse -- she's so responsive! -- but she doesn't make him leave. To Michael's very slight credit, he doesn't try to hide anything when Cathy suspects what has happened. Cathy then tries to even the scales by letting herself get picked up by a random Greek boy, but it turns out she is a little bit too much of a straight-arrow to seal the deal. Writer-director Kleiser (who also directed Grease and The Blue Lagoon) frequently highlights clever details in his scenes, and this would-be seduction scene is memorable for the fact that the Greek boy puts on an appropriately sexy Prince record, but then has to keep hitting the record player because it runs below speed. An uncomfortable Cathy uses his divided attention as an excuse to run away.

Eventually, Cathy confronts the French woman, but finds she doesn't have an enemy. The woman, an archaeologist named Lina, doesn't want to steal Michael away -- escaping the hang-ups of relationships is part of Lina's reason for taking work in this semi-isolated spot. With Cathy and Lina as friends, the film gently but steadily nudges our heroes to their inevitable three-way love match. Though it isn't without some heat, the film is pretty chaste when it comes to the actual mechanics of their togetherness. The situation also never devolves into an omnisexual free-for-all, meaning that the ladies just trade Michael back and forth between them, which leads to a funny moment where Michael will not wake up from a nap and Cathy and Lina winkingly agree that he must have "gotten too much sun."

Summer Lovers never approaches the emotional heft of something like Jules and Jim -- there are too many having-fun montages set to '80s pop hits in place of further character development -- but the filmmakers care enough for Cathy, Lina, and Michael that it's easy to get swept up in their shared struggle to figure out exactly how they are going to find their ways in the world. Late in the film, the characters realize that this partnership means more to all three of them than a summer fling; it's the unique human connection they didn't realize they had been missing. That realization comes across as quite touching and, setting aside knee-jerk cynicism, it's hard not to wish all three of them the best. 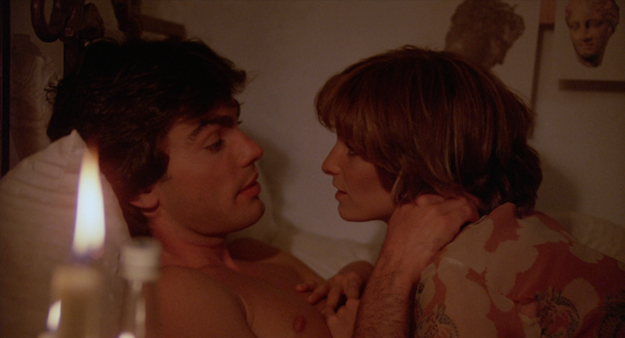 The Blu-ray
Summer Lovers comes in a limited edition of 3000 copies, and is packaged with a color booklet featuring an essay by Twilight Time's Julie Kirgo.

The Video:
Considering that the old MGM DVD was pan-and-scan, it's gratifying to see this film get an attractive AVC-encoded 1080p 1.85:1 transfer that is fairly crisp and clean but thankfully does not scrub away the film grain. Cinematographers Dimitris Papakonstadis and Timothy Galfas give the film a natural look, often using available light, that is appealing. Colors are strong and nicely saturated.

The Audio:
The soundtrack is heavy with early '80s hits from acts as varied as Elton John, Prince, Depeche Mode, pre-"Maniac" Michael Sembello, Lime (in a lovely lip-sync scene), Tina Turner, The Pointer Sisters, and Chicago. The disc's DTS-HD MA 2.0 stereo audio track provides the proper full-response danceclub oomph for most of these tunes, as well as cleanly presenting the dialogue and ambience. One subtitle option: English SDH.

- A new recording with Kleiser, who sounds like he is reading from prepared notes, but nonetheless offers nonstop insights into the making of the film, punctuated by noteworthy blurbs from critics and internet commenters that Kleiser has particularly enjoyed over the years.

Final Thoughts:
Summer Lovers is a fun romp with both beautiful locales and beautiful bodies on constant display. Writer-director Randal Kleiser even bothered to include a fairly fleshed-out (ha ha) story as well. The new Blu-ray offers a significant upgrade over the old "fullscreen" DVD, both in the A/V and bonuses department. Recommended. 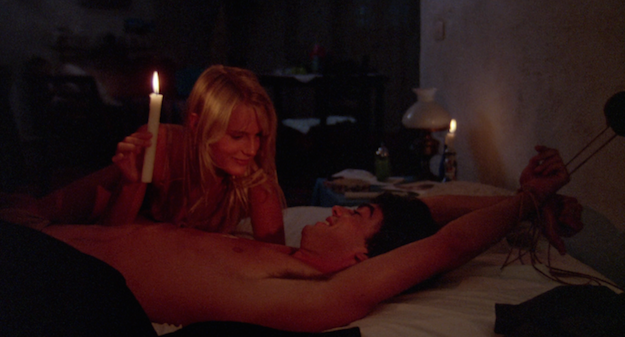