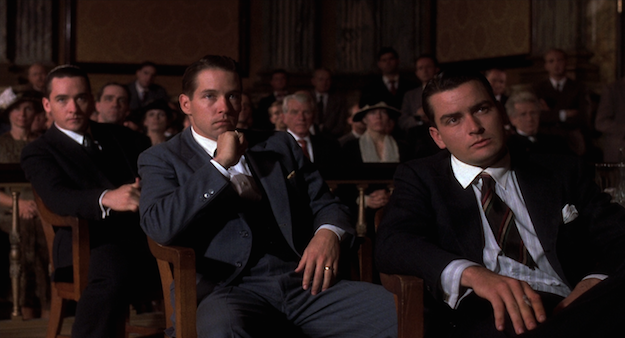 Often touted as one of the best movies made about the sport of baseball, Eight Men Out (1988) represents prolific indie filmmaker John Sayles (Matewan, Casa de los Babys) at his most crowd-pleasing. This does not mean that his approach here is not as complex or thoughtfully layered as in his less mainstream efforts, but Sayles's retelling of the 1919 "Black Sox" gambling scandal is so energetically realized, with such an undeniable love for both the sport and his ensemble of first-rate actors, that every frame of the film can't help but be immensely entertaining.

As anyone who has seen Field of Dreams knows, the 1919 World Series went down in history for the wrong reasons, thanks to some enterprising gamblers who managed to get a big chunk of the Chicago White Sox team to "fix" the series for them. Eight Men Out, based on the nonfiction book by Eliot Asinof, takes us from the hatching of the scheme to the eventual court case, where eight members of the team were tried for perpetuating a confidence scheme. The film effectively shows that rather than being a well-oiled criminal operation, the fix was a sloppy mess.

The messiness commences when two different sets of gamblers approach a few members of the Sox about purposefully losing the World Series, at a price of 10 grand per player. On one side, you have former pitcher Bill Burns (Christopher Lloyd) and washed-up boxer Billy Maharg (Stranger Than Paradise's Richard Edson) working together, and on the other you have Irish bookie Sport Sullivan (Kevin Tighe), working on his own. The owner of the White Sox at that time was noted cheapskate Charles Comiskey (Live and Let Die's Clifton James), so these enterprising gamblers are able to get serious traction with the more mercenary members of the team, Chick Gandil (Michael Rooker) and Swede Risberg (Don Harvey). Chick and Swede figure if two different sets of gamblers want to pay them 10 G's for throwing some games, why not say yes to both and get 20 G's? Of course, things get stickier when both factions turn to the same man to bankroll them, kingpin Arnold Rothstein (Michael Lerner). It gets stickier still when the gamblers choose to hold onto most of Rothstein's cash to place their own bets, leaving far less than promised for the players.

The film also shows that the ballplayers themselves have trouble getting on the same page about the fix, because they are all coming at it from different angles. Chick and Swede are clearly committed to the payday. Pitcher Eddie Cicotte (David Strathairn) is the most tortured because he needs the payoff money for his family, but he clearly doesn't like doing it this way. "Shoeless" Joe Jackson (D.B. Sweeney) is similarly torn between his loyalty to his teammates and his immense desire -- and ability -- to be a winner. The rest of the conspirators -- Happy Felsch (Charlie Sheen), Lefty Williams (James Read), and Fred McMullin (Perry Lang) -- figure if Joe and Eddie are in, they might as well get paid too. The boyish Buck Weaver (John Cusack) refuses to get involved. Buck refuses to give less than his all on the field, and he frequently tries to cajole his teammates into performing to their ability during the Series. Nonetheless, he eventually gets lumped in with the others when it comes time to face the music.

Eight Men Out is a production where every cast member feels carefully hand-picked, to make sure the absolute best actor was put in each role. Especially the supporting cast. Bill Irwin and NYPD Blue's Gordon Clapp both play members of the team who are not in on the fix, but their attitudes could not be more different. Irwin's Eddie Collins is a quiet intellectual whose annoyance at his teammates is kept just barely underneath a layer of refined tact. Clapp's Ray Schalk, on the other hand, is a hothead who immediately lashes out at the other players for their bad plays and presumed transgressions. Frasier's John Mahoney plays team manager Kid Gleason, who simultaneously feels true affection for his team and deep sadness and disappointment if it turns out they really are on the take. Sayles offered himself the role of sports writer Ring Lardner, which gives him the plum opportunity to hang around with the legendary Studs Terkel in the role of fellow Chicago sports scribe Hugh Fullerton, commenting dryly on the con job as it unfolds.

Sayles also casts some solid character actresses -- Nancy Travis, Wendy Makkena, Barbara Garrick, and his longtime partner Maggie Renzi -- as some of the players' wives, although admittedly he gives them very little to do.

Some critics have argued that a viewer has to be a baseball fan to enjoy Eight Men Out, but I think that's patently untrue. I don't follow baseball, and I still got swept up in the drama of the story and the performances. Does knowing the history help? Maybe. But so does paying attention to the performances. The entire cast is so effective at tapping into the emotional cores of their characters that if a few stray baseball references go over your head, so what? This film shouldn't be pigeonholed as "just a sports movie," because it explores much more within the American character than the mechanics of our national pastime. 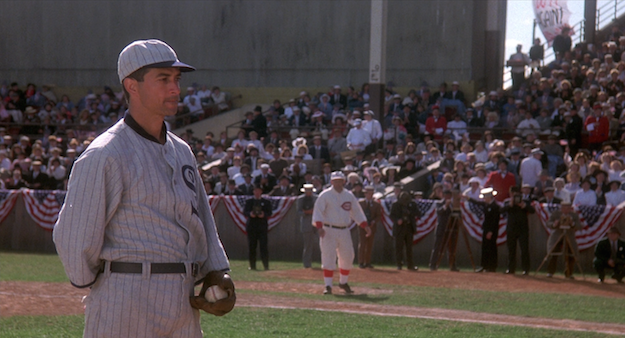 The Video:
Now, here's a real difficult situation. On a pure picture-quality level, this AVC-encoded 1080p 1.85:1 presentation is an excellent treatment of the film, offering more realistic skin tones than prior releases and a more satisfyingly rich color palette. Cinematographer Robert Richardson's subtle use of shadows is reproduced with delicacy. Apart from some stray dirt here and there, the image is clean and stable without scrubbing away the film grain.

But then...there's the squashing. What do I mean? When I watched the film, I noticed that everyone onscreen looked a little... well, fat. Like someone took the left and right sides of the screen and yanked them apart a little bit. I checked on some of the other home video review sites and they have noted the faces are too wide too, although they couldn't pinpoint what was happening.

Well, I went to my local library, checked out the old 2001 DVD, and I think I've got this case cracked. 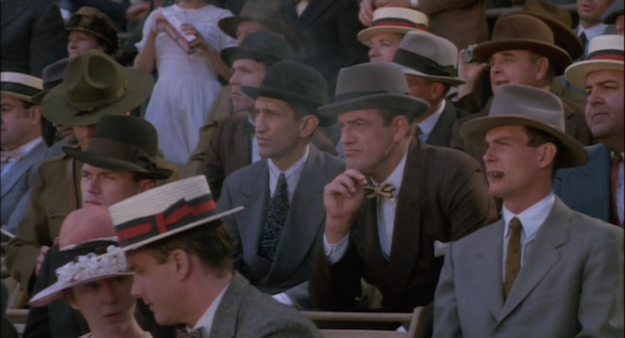 And here is the same still from the new Blu-ray: 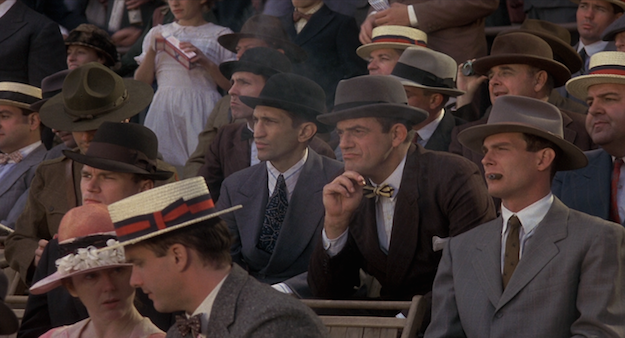 Do you notice the girl in the top left, with the box of Cracker Jacks? In the DVD version, her face is not visible; in the Blu-ray, you can see nearly half of her face. Ditto the neck of the woman at the bottom left. Based on this, my assumption is that the film was probably shot in spherical Super 35mm, which left extra information at the top and the bottom of the screen that could be used in the 1.33:1 TV version or whatever other size was needed for projection. For some reason, when the scan was done for this master, a little too much extra information was pulled from the top and bottom of the frame, creating an image that is presented at 1.85:1, but is probably better suited for 1.66:1. Here's my manual readjustment of the Blu-ray image to a 1.66:1 ratio: 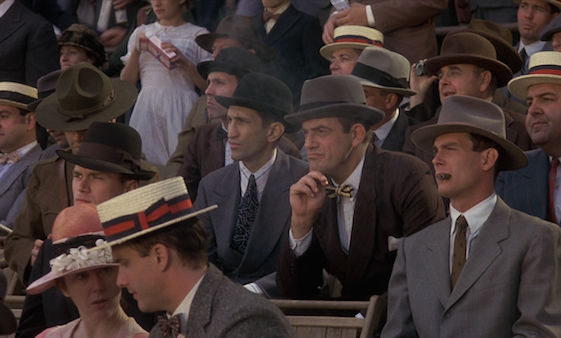 The proportions of those heads look correct now, don't they?

Knowing that this is a misframed, stretched version of the image, I find it hard to give a wholehearted recommendation to this release, even though it's quite strong technically otherwise. I eventually got used to the stretching, and maybe you will too. But if you don't want to, you shouldn't have to!

The Audio:
The DTS-HD MA 5.1 surround soundtrack (remixed from the original mono) offers no room for complaint. Though much of the sound is focused front and center, Mason Daring's jazzy period-aping score gives the surrounds something to do. The ambient effects, while rather subtle, have also been strategically and thoughtfully spread to the rear channels at effective moments throughout. No subtitles.

- Carried over from the 20th Anniversary DVD, this is a wonderfully engaging, information-packed commentary track. Sayles fills in tons of relevant historical baseball information when not discussing the logistics of the film shoot or explaining why certain events and elements had to be changed onscreen (typically, it's the budget). A wholly necessary companion to the flick.

Final Thoughts:
Eight Men Out is an expertly crafted retelling of the 1919 Black Sox baseball scandal that is well worth discovering and revisiting. This Blu-ray release carries over only some of the bonuses from the 20th Anniversary DVD release; still, that's better than most bare-bones Olive releases. More problematic is the incorrectly framed and unnecessarily stretched video. Hopefully, this issue will get fixed, so I can give the film the high recommendation it deserves. Until then, when it comes to this Blu-ray, I can only suggest you Rent It. 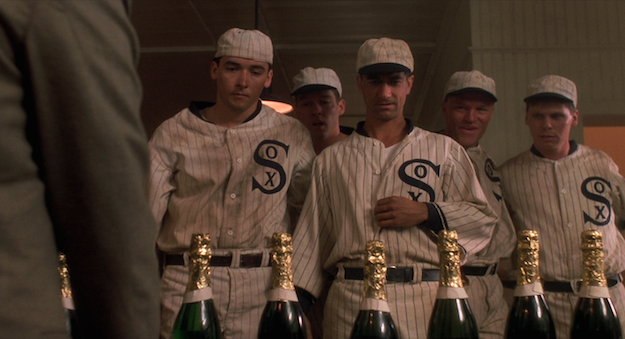