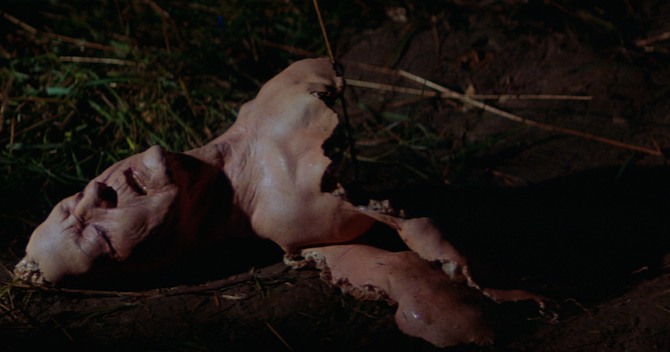 Strange Invaders, from 1983, offers a fun homage to the alien invasion flicks of the '50s, but with a surprisingly low camp quotient. The movie is certainly not without humorous touches, but it treats its small-town pod people as legitimately terrifying. And despite its PG rating, the film has more than its share of effectively gross make-up effects whenever the aliens shed their human form and reveal the black bug eyes and wrinkled bodies lurking underneath.

The film opens with a '50s-set prologue, in which a small Illinois town is seemingly wiped out by an invasion of alien beings. We then jump ahead twenty-five years, to the predicament of Columbia University professor Charles Bigelow (Paul Le Mat). Charles thinks nothing of it when his ex-wife Margaret (Diana Scarwid) drops off their daughter Elizabeth (Lulu Sylbert) to go back to Centerville, Illinois, for her mother's funeral. But then Margaret doesn't return and she doesn't call. Days and days pass. Charles finally decides to road-trip it to Centerville, along with his dog. (Anyone who has seen any kind of horror movie knows that dog is toast.) Rather than finding his ex-wife, Charles just finds blank stares and dead ends. Eventually, the new inhabitants of Centerville make their move on Charles, and he realizes the town is full of aliens who mean to do him harm.

Charles manages to get out of town -- barely -- and he starts looking for answers. First, he goes to the government and tries to convince their U.F.O. studies expert Mrs. Benjamin (Louise Fletcher) of what he saw, but she merely listens politely and sends him on his way. Then, Charles spots a photo in a tabloid rag that looks exactly like an alien he saw in Centerville, so he goes to the writer of the accompanying article for help. That writer, Betty Walker (Nancy Allen), concocted the content of the article. Nonetheless, she decides to look into the origin of that photo, because Charles is kind of cute and obviously quite upset. Soon, he's not the only one upset, as it becomes clear that the aliens (and maybe the government) are after the both of them. They can only hope to find out the answers to what the heck is going on before someone -- or something -- gets rid of them both.

The high-wattage cast does a lot to make this silly little story more than just a decent pastiche. As he proved in Melvin and Howard, Paul Le Mat makes a good everyman, and his character provides solid grounding for the ridiculous events that occur around him. Nancy Allen is also right in her comfort zone, playing a big city dame whose tough exterior only partially conceals a softer, sympathetic side. Michael Lerner pretty much steals the show as an insane asylum inhabitant who saw his immediate family decimated by the alien visitors twenty-five years ago and has been trying to find someone to believe him ever since. Only Diana Scarwid, who was nominated for an Oscar a few short years before this film was released, and got an (unfortunately deserving) Razzie nomination for this particular performance, appears less than engaged by the material. (Although maybe she was going for a self-consciously "B-movie" performance... on the other hand... eh, I doubt it.)

Director Michael Laughlin (who co-wrote the script with Bill Condon, a filmmaker who has made some good movies and also Twilight: Breaking Dawn) peoples the smaller supporting roles with faces that will resonate with the sci-fi and fantasy crowd, like Lost in Space's June Lockhart as Charles's mother, The Thing from Another World's Kenneth Tobey as a particularly nasty citizen of Centerville, and The Princess Bride's Wallace Shawn as Betty's unfortunate building superintendent who goes to investigate something weird in her bathroom.

If one were to sum up Strange Invaders in a word, it probably would not be "groundbreaking" or "memorable." Instead, the vocab word in question would be somewhere more in the vicinity of "solid" and "likable." In a genre that is littered with outright duds, that does elevate this film over most of its brethren. Still, Strange Invaders lacks the visionary qualities or outright insanity that would make a lesser-known flick like this a must-see. As it is, this movie is worth seeing, but -- as long as Twilight Time's limited edition stock holds out -- there's no need to rush.

The Blu-ray
Strange Invaders comes in a limited edition of 3000 copies. The disc is accompanied by a color booklet, which features an essay by Twilight Time's Julie Kirgo.

The Video:
The AVC-encoded 1080p 2.35:1 image is a definite leap up from the 2001 MGM DVD in terms of clarity and color saturation. However, cinematographer Louis Horvath's decision to fog up nearly every shot to give the film an aura of gauzy nostalgia means that fine detail is impossible to gauge, as basically the whole dern thing is soft-looking on purpose. No significant compression issues and the print is stable and fairly clean.

The Audio:
The DTS-HD MA mono audio is clean and clear. Solid but unremarkable. No complaints. One subtitle option: English SDH.

- Carried over from the 2001 DVD, the commentary makes frequent mention of Condon's then-recent Oscar win for Gods and Monsters, as well as Laughlin and Condon's prior collaboration, Strange Behavior. Originally the plan was to do a full Strange trilogy, paying homage to three different kinds of '50s horror movies, but Laughlin jokingly claims that he and Condon got in a physical fight during the making of this film. Considering that Laughlin and Condon were recorded separately, maybe he's only half-joking. One anecdotal highlight comes from Condon, who talks about going to meet critic Pauline Kael with Nancy Allen and a print of the film, in the hope that she would write a nice review. Spoiler alert: It does not go well.

Final Thoughts:
Strange Invaders is fun. There's not much more to it than that. Some excellent effects and some likable performances put this a notch above your typical popcorn sci-fi flick, but just a notch. Recommended.