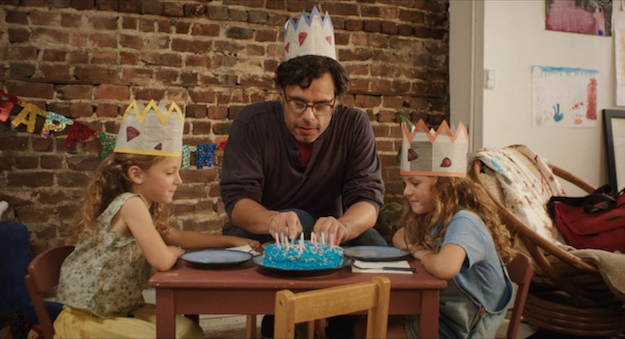 For around three-quarters of its running time, the New York City-set People Places Things is a perfect blend of sharp, low-key comedy and authentic post-break-up drama, anchored by a subtle and rich lead performance by Flight of the Conchords' Jemaine Clement. With his wry awkwardness and inborn melancholy, Clement is an unlikely leading man, but People Places Things' writer-director, Jim Strouse (Grace Is Gone, Lonesome Jim), allows his star's quiet charisma to shine through in ways that quirkier films like Eagle Vs. Shark have previously obscured.

The film opens with a brief prologue in which Will Henry (Clement), a mumbly, mopey comic book artist, walks in on his girlfriend Charlie (In a World...'s Stephanie Allynne) having sex with another man -- wait for it -- during their twin daughters' fifth birthday party. As familiar as this sort of scene is, the specificity with which Strouse imagines it, and the uniquely muted anger Clement projects during it, help to set the story off on the right foot.

Next we jump ahead one year, to see how Will copes with single life. He has been exiled to a small-ish apartment in *gasp* Queens. He spends his nights turning his heartache into a new graphic novel and spends his days teaching college kids to draw comics. In class, he is greeted by excited young faces and blank stares in equal measure. One of Will's better students is Kat (The Daily Show's Jessica Williams), who invites him to have dinner with her single fortysomething mother, Diane (About Last Night's Regina Hall). Will and Diane are naturally resistant to being fixed up at first, but they inevitably end up succumbing to each other's charms.

Charlie, meanwhile, lives in the house they all used to live in, but now with the kids (the wonderfully natural Aundrea and Gia Gadsby) and the man with whom she cheated on Will, a monologist named Gary (Orange Is the New Black's Michael Chernus). If that wasn't enough of a kick in the teeth, Charlie and Gary are planning to get married -- something that Will and Charlie never did. As if by knee-jerk reflex, Will asks to spend more time with his daughters. Seeing as Charlie is as befuddled about her life at this juncture as Will is about his, she decides to let him take a shot at having the girls during the week. Of course, he bungles it magnificently, failing to wake up in time to take them to school and feeding them cold pizza for breakfast as they all jump into a cab.

I laughed out loud at People Places Things more energetically and more often than I have at any other new comedies I've seen in the past year or so (okay, Trainwreck is probably a close second). This is somewhat surprising as the film is pretty short on wackiness or big slapstick setpieces: Will's discovery of Charlie's infidelity and a late-film fistfight are probably the broadest moments in the film, and even they are relatively low-key and completely grounded. Instead, the laughs in People Places Things come from a whole lotta smartly executed verbal jokes and believably awkward (though thankfully not totally cringe-y) encounters. Clement is particularly good at throwing away passive-aggressive jokes under his breath, but the whole cast is truly on the same self-conscious but self-aware wavelength. Regina Hall has stolen the spotlight in many of her films, and her nuanced portrayal here, of a woman who has been around the block with love more times than she would care to count, is positively winning. Stephanie Allynne deftly maneuvers through a difficult role that requires her to be semi-villainous (at least in Will's eyes) but still essentially appealing and sympathetic. Jessica Williams follows up her brief run on Girls with another striking performance that demonstrates she clearly has a big career ahead of her once she decides she is done with that whole fake-news thing.

People Places Things has an easy, unforced, observational tone that unfortunately disappears in the final act. In those last twenty minutes or so, screenwriter Strouse seems to have realized that -- much to his chagrin -- now he has to go around tying up all these story threads he introduced earlier. This shift in storytelling style, from being essentially organic to slightly mechanical, is not enough to ruin the entire film but it is definitely disappointing. Fortunately, the performances never falter, so viewers are never inspired to lose their investment in these extremely likable characters -- even though the film doesn't totally stick the landing. 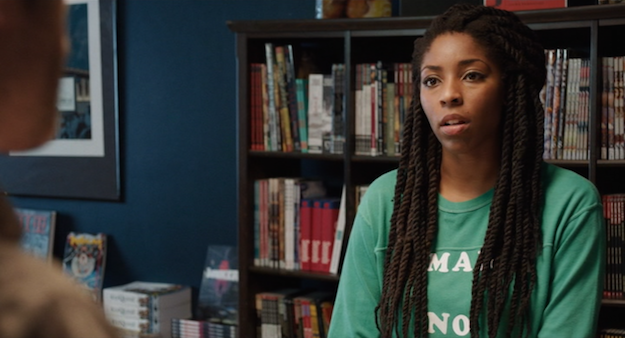 The Video:
This widescreen 1.85:1 presentation looks pretty average for a new movie in SD. Color is saturated and the black levels are strong. Detail is a little soft, but not distractingly so. There is not a lot of blocky artifacting, but there is a pretty consistent layer of noise on the image, which is hard to pin down to either the digital shooting format or just the DVD encode.

The Audio:
The soundtrack comes in both Dolby 5.1 surround and Dolby 2.0 stereo, which are not drastically different, although the 5.1 has some subtle ambience thrown in and slightly more elaborate mix of the musical score. Both versions are clean and clear. The disc offers English SDH and Spanish subtitles.

Special Features:
Don't get Hurt Feelings, but there are no bonuses.

Final Thoughts:
Look, endings are hard. I understand that. So let's not focus on that for a moment. People Places Things is quietly brilliant, intensely heartfelt, and undeniably funny. The cast, led by Jemaine Clement, combine like a Transformer into a perfectly oiled melancholy-comedy machine. I laughed. A lot. I literally slapped my knee. Twice. It's wonderful. Highly Recommended. 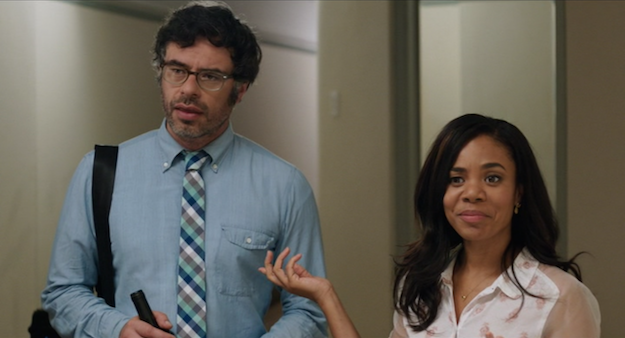