Elinor: I have nothing to tell.
Marianne: Nor I. Neither of us have anything to tell. I because I conceal nothing, and you because you communicate nothing. 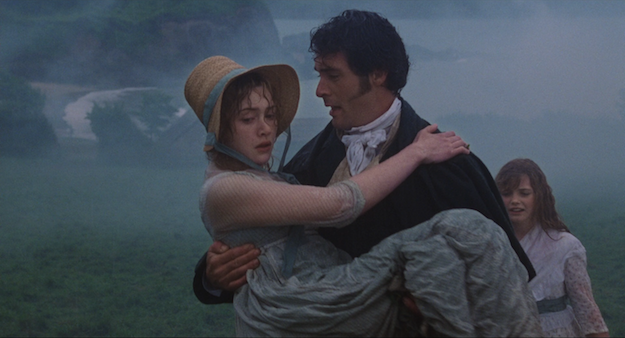 Sense and Sensibility arrived during the Jane Austen mini-boom that somewhat permeated movies and TV in the mid-to-late '90s and has persisted to a lesser degree ever since. While this film might not have the cult following of that BBC Pride and Prejudice or Amy Heckerling's semi-irreverent Clueless, it holds up exceedingly well twenty years after its initial release. Writer and star Emma Thompson's airtight script, which rightly won the Adapted Screenplay Oscar, is beautifully realized by director Ang Lee (Brokeback Mountain).

It was initially thought of as some sort of novelty to hire the Taiwan-born filmmaker as the director of such a distinctly British story, but Lee's understanding of the way people behave within societies that have strict social codes seems to put him right in his wheelhouse with this material. Any screenwriting teacher worth his or her salt will tell you that movie storytelling is "all about subtext," because that is basically how people in real life talk to each other. Lee's direction of Sense and Sensibility takes that principle and essentially turns it up to 11. The vast majority of the story unfolds through what characters don't say to each other and the way their behavior negates what they do manage to say. As smart and witty as Austen-via-Thompson's language is in the film, Lee's subtle and sensitive direction is expressive enough that you could likely follow this film with the sound off -- or dubbed into a foreign language.

The film begins with the Dashwood sisters -- Elinor (Thompson), Marianne (Kate Winslet), and little Margaret (Emilie Francois) -- losing their father and their home, thanks to the patriarchal law of the land. Despite their own father's wishes, their thoughtless stepbrother John (James Fleet) legally inherits everything because he's a man, and John's greedy wife Fanny (Harriet Walter) makes sure that he doesn't slip and give them any money or support beyond what is legally required. There is a slight upside, though, in that Fanny's shy and sweet brother Edward (Hugh Grant, at the height of his floppy-haired powers) comes to visit and manages to win eldest sister Elinor's heart. Of course, Elinor is too reserved and has too much sense (get it?) to tumble into a mad love affair, and though she is obviously quite sad about it, she does not protest when Edward is called back to London and she and her family are exiled to a somewhat dilapidated old cottage far out in the country.

Meanwhile, young, impetuous, passionate Marianne (the "sensibility" one) finds herself catching the eye of the middle-aged Colonel Brandon (a very dry but dashing Alan Rickman), who shares her artistic sensibility. However, she starts pining after the dark and handsome hottie John Willoughby (Greg Wise) who rescues her when she twists her ankle in a rainstorm.

At its core, Sense and Sensibility is a plain and simple romantic comedy. Once we know the players, we can basically work out exactly where this story is heading. That is not to say that the film makes the journey to our inevitable happy ending boringly easy. Complications consistently arise from the fact that the characters are hemmed in by their station in society: the women have no money or power, which prevents them from truly realizing their dreams, and the men are too afraid to lose the money and power they have, which prevents them from truly realizing their dreams. Add to this conniving individuals such as Lucy Steele (Imogen Stubbs), who is also pursuing Edward and seems to believe in the idea of keeping one's enemies closer than one's friends, and you've got some consistently satisfying dramatic tension.

It doesn't hurt, of course, that the cast is littered with some of the finest thespians England has produced. In addition to the names I've already mentioned, the film also includes Tom Wilkinson in a brief appearance as the dying Mr. Dashwood, The Duchess of Duke Street's Gemma Jones as the widowed Mrs. Dashwood, Imelda Staunton as an insufferably talkative country lady, and Hugh Laurie as her beleaguered husband, who initially exudes only deadpan annoyance but eventually displays surprising warmth and depth.

I remember seeing Sense and Sensibility as a high school kid when it came out in theaters. Going in, I expected the movie was probably going to be well-made, but kind of genteel and British-y. You know, probably kind of dull. But then the first few scenes got laughs. And then I found myself fascinated by these performances which were so superficially restrained and yet were intensely emotional and expressive at the same time. By the end, I was so engaged that I was probably sniffling out a happy tear or two despite myself. I know I certainly did that this time around. 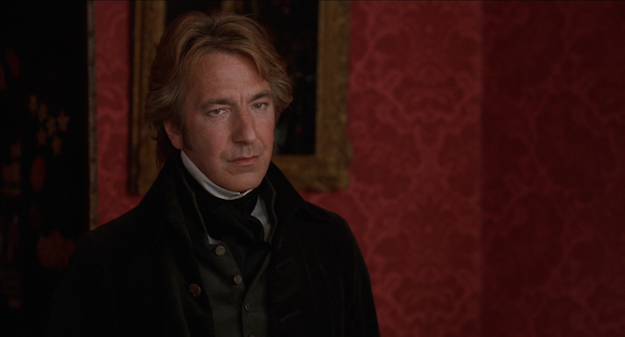 The Blu-ray
Sense and Sensibility comes in a limited edition of 3000 copies. The disc is packaged with a color booklet featuring an essay by Twilight Time's Julie Kirgo.

The Video:
Sony has once again provided a gorgeous new master, like a lot of their recent Twilight Time releases. The AVC-encoded 1080p 1.85:1 image offers outstanding, crisp fine detail with minimal noticeable compression issues. Colors are typically bright and saturated. There are many sunny outdoor shots, which often ironically counterpoint the characters' personal miseries. Black levels are strong without crushing. This is a fantastic HD upgrade.

The Audio:
The soundtrack is offered both in a DTS-HD MA 5.1 surround mix and a DTS-HD MA 2.0 stereo mix. The surround mix naturally spreads the ambience out to the rear channels a bit, while the stereo mix sounds a touch more concentrated. The film isn't heavy on elaborate aural effects or music anyway, so the distinctions are minor. Both presentations are clear and attractive. Subtitles-wise, an English SDH track is offered.

Special Features:
Most of these bonuses have been ported over from the 2002 Special Edition DVD release of the film.


Final Thoughts:
Sense and Sensibility is notable as director Ang Lee's first mainstream worldwide success. Not coincidentally, it is also one of his greatest films. This is a story that exists almost entirely in the things characters are not saying to each other, and it helps that what they are saying is often quite clever and entertaining too. Watching it now for the first time in twenty years, I suspect it might just be a perfect film. DVD Talk Collector Series. 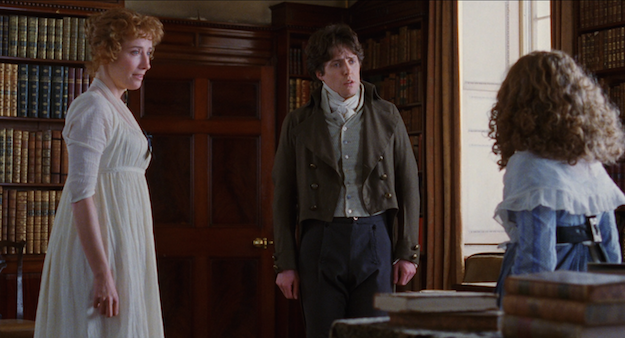