NOTE: The photos accompanying this review are promotional stills and do not reflect the quality of the Blu-ray under review. 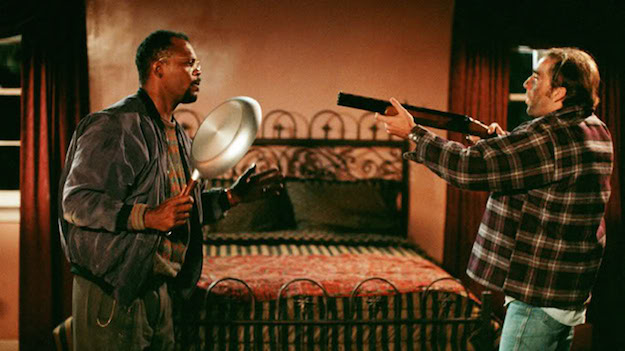 The 1993 satirical farce Amos & Andrew happens to be the only directorial effort of Oscar-nominated screenwriter E. Max Frye (Something Wild, Foxcatcher), which sadly makes sense, considering how poorly this film did with critics and audiences alike. I remembering renting Amos & Andrew on VHS in junior high and proceeding to sit stone-faced as the 90-minute film unspooled. This time around, I laughed more than I expected to, but I was still left feeling unsatisfied. As Something Wild made clear, Frye likes to surprise the audience by playing around with tone; with Amos & Andrew, this affinity manifests in ways that just muddle the purpose of the film and mute the comedy.

First off, let's deal with that title. Amos & Andrew is clearly meant to evoke Amos 'n' Andy, the controversial radio show which featured white actors voicing stereotyped black characters and which lasted for decades (eventually spawning a movie, cartoons, and a TV show). Therefore, Amos & Andrew is a title that promises an edgy (or at least cheeky) exploration of racism in America in the guise of a mismatched buddy flick. The film only somewhat delivers on that promise. Taking aim at the biases of fake liberals and small town police departments, Amos & Andrew mostly goes for low-hanging fruit. A late-film gag -- in which the film's black main character, Andrew Sterling (Samuel L. Jackson), runs away from bloodhounds like a bit player in Roots -- is the only moment that manages to tread anywhere near provocative territory.

The film starts promisingly, with Pulitzer Prize-winning playwright Sterling arriving at a high-toned, Hamptons-like island community, looking to check out his new summer home. Two of his nosy neighbors, the Gillmans (Michael Lerner and Margaret Colin), see Sterling setting up some stereo equipment and assume that he is in fact robbing the place. The local police chief (Dabney Coleman) takes these citizens at their word. Since the chief is running for office in the coming election and could use some good publicity, he decides to come after this home invader loaded for bear. Inevitably, the confusion about Sterling's identity persists, and his officers (including a mildly crazed Brad Dourif) start shooting at the playwright's house so excitedly that they turn the front door into Swiss cheese.

When the chief manages to get a phone line going to the house, and he speaks with a rattled Andrew Sterling, the shocked cop quickly realizes the major boo-boo he has just spearheaded. And so, he comes up with a plan. He decides to take a redneck lowlife from his jail, Amos Odell (Nicolas Cage, doing half H.I. McDonough and half Cameron Poe) and make him break into Andrew Sterling's house carrying a shotgun. Sterling will assume it was Amos shooting at him before, and then the chief can "make Amos surrender" before sending the redneck on his way, never to be heard from again.

This pivotal moment is where E. Max Frye's script starts to slowly crumble. Frye is clearly a talented writer, but he cannot make this implausible turn of events stick, and he attempts to compensate for the silliness of the chief's decision by tugging the story in two diametrically opposed directions: one involves carefully building an elaborate Jenga tower of misunderstandings between characters (what Roger Ebert would ungenerously call an "idiot plot") and the other involves tossing in random wacky events and new side characters to create an aura of comic chaos. The problem with the first strategy is that Frye is so heavy-handed in setting up his misunderstandings that the audience can see the punchlines coming a mile away. The flaw in the second strategy is that, even with this killer supporting cast -- which also includes Bob Balaban as a narcissistic hostage negotiator and Giancarlo Esposito as a media-courting, Al Sharpton-type preacher -- the film's flailing wackiness rarely leads to actual jokes or big laughs.

Even more of a problem is that the attitude of the title characters toward each other is badly defined at any given moment. When the misguided Gillmans decide to notify the news media about the police stand-off, Dabney Coleman's chief is forced to maintain the ruse he set up with Amos, and the fake break-in turns into a real hostage situation. Amos holds no ill will toward Andrew but he (rightfully) suspects the chief will renege on their agreement, so he decides to hang onto the famous guy to keep himself from getting shot by the cops. Andrew, meanwhile, quickly shifts from assuming that Amos is an assassin sent by the FBI to kill him to mostly being cool with this wild-haired, shotgun-toting redneck dragging him along on an escape attempt. One would expect a fair amount of comic bickering between captor and captive at a time like this, but this is one area where the film oddly avoids wackiness -- and not for the better.

It's a testament to the talent of both Samuel L. Jackson and Nicolas Cage that this uncertain mishmash of a movie remains quite watchable, even during the various stretches without any discernible laughs. Frye gives both Amos and Andrew a big showy monologue, in which they reflect on how their past has made them the men they are today: with Amos, it's a story about wishing his life resembled that of the smiling sea monkey families he would see in the back of comic books, and with Andrew, it's a story about how his father raised him to find his place within the white world. Jackson and Cage dig into these speeches with relish and, for a brief moment, make their sketchily conceived characters into more believable, rounded men.

Even with their talents, the film can't seem to muster a point behind all these outlandish goings-on -- apart from the point that white folks are racist and cops are corrupt. But Amos & Andrew gives us that in the first five minutes, then just spins its wheels for another 85. For most of my viewing of Amos & Andrew, I was intent to forgive the film's narrative inconsistencies and short supply of great gags... if and when the film properly paid off its interesting set-up. It never paid off. 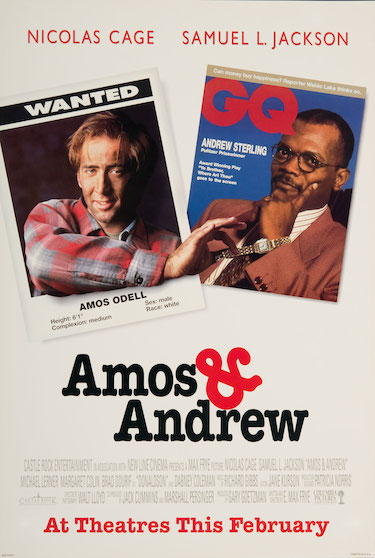 The Audio:
The DTS-HD MA 2.0 stereo soundtrack is also nicely preserved, with no noticeable damage, overmodulation, or interference. There's a lot of talking, but there's also some shooting -- and even an explosion -- that are presented with appropriate oomph. The score by Richard Gibbs, which was sometimes a little too on-the-nose emotionally for my taste, nonetheless is given a clean and powerful showcase.

Final Thoughts:
Amos & Andrew loads down a great premise with too many unbelievable complications and too much random wackiness. Stars Samuel L. Jackson and Nicolas Cage, plus a murderer's row of great character actors, make the time pass more pleasantly than it logically ought to, but even so, I'd say just Rent It. 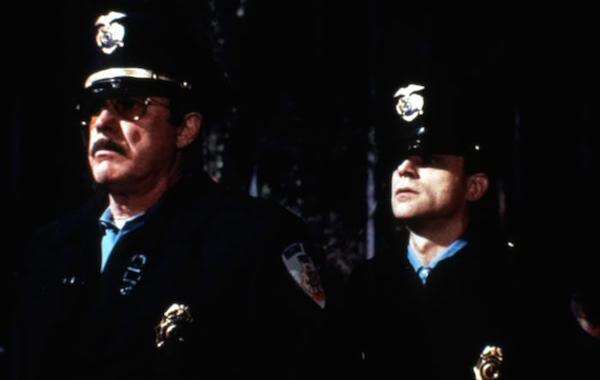