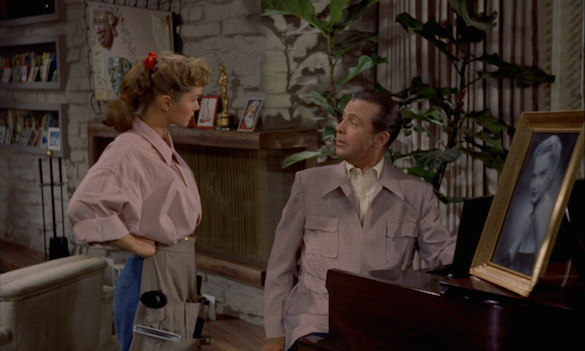 The 1954 romantic comedy Susan Slept Here, starring Dick Powell and Debbie Reynolds, is one of the rare titles that began its digital video life as a Warner Archive MOD DVD-R and has now managed to get an upgrade to a legit Blu-ray. Considering the care taken in translating the lush Eastmancolor cinematography to HD, it is certainly a welcome upgrade.

The film itself is an odd little artifact from an era with wildly different sexual politics, but Susan Slept Here admittedly has its fair share of laughs once it finally unpacks its convoluted set-up. Adapted by Alex Gottlieb from a play he wrote with Steve Fisher, the movie does little to hide its stagebound origins, taking place mostly in the apartment of Academy Award-winning comedy screenwriter Mark Christopher (Powell). When we are introduced to Mark (by his Academy Award, who narrates the film), he is in a serious funk. Sure, he is engaged to a beautiful but bland senator's daughter, Isabella (Anne Francis), but much like John Sullivan before him, Mark is generally dissatisfied because he is convinced that he should be writing serious films instead of frivolous entertainment. His secretary Maude (Glenda Farrell) and his "man Friday" Virgil (Alvy Moore) frequently try and fail to convince him that he's not cut out for drama, both for their own sanity and so they won't have to look for new work in the near future. (When Virgil sees Mark piled down with Christmas presents, he cracks, "We're still Christmas shopping like we're still employed, aren't we?") If any character was ready for his world to be turned topsy-turvy, surely it is poor, misguided Mark Christopher.

I hope you haven't misplaced your ability to repeatedly suspend disbelief, because here is where things start to get disbelievable. A couple of cops who worked as technical advisors on one of Mark's movies decide to bring him a "Christmas present," in the form of seventeen-year-old juvenile delinquent Susan Landis (Reynolds). The (barely coherent) idea is that Mark can pick her brain for background on a movie character and Susan can spend Christmas Day not technically arrested yet. Now if you can buy that, next you have to have swallow the conceit that a perfectly made-up, cleanly dressed, and charmingly coiffed Debbie Reynolds is this movie's idea of a minor in trouble. Of course, Susan has to look good, because she has to be a threat to Mark's fiancee Isabella, even though everything is quite harmless -- at first.

Abandoned by his assistants in his time of need, Mark spends the night chatting and playing cards with Susan, and he discovers -- surprise, surprise -- that she's a pretty sweet, interesting kid. When Susan mentions that her mother left behind written consent to get married, Mark decides to marry her in Vegas, so she doesn't have to go back to kiddie jail. Naturally, all of Mark's acquaintances balk at the idea of him marrying someone half his age (another conceit that requires intense swallowing is that fiftysomething Dick Powell, in his final film role, is merely thirty-five). But Mark figures he can steer Susan out of trouble, then have the whole thing annulled. Mark just didn't figure on one thing: Susan. Susan has no intention of marrying for any reason besides love, and she has no intention of leaving the marriage without getting it consummated first.

Naturally, the main idea of this kind of film is to see how much sexy innuendo the filmmakers can squeeze in without getting censored. Gottlieb's script is full of one-liners and asides that say a lot without actually coming right out and saying anything. And director Frank Tashlin, who later made milk shoot out of a bottle as Jayne Mansfield walked by, in The Girl Can't Help It, also knows his way around a suggestive visual. The most memorable in this case, is probably the one taken for the poster image: Susan, having won the right to sleep in Mark's bed (alone), wears Mark's pajama bottoms as her complete sleepwear, having pulled the waistband all the way up to her chest.

Powell and Reynolds simultaneously make a great onscreen couple and a terrible one. Both actors have excellent comic timing and a knack both for pulling a funny face or comporting themselves with elegance. However, there's no heat. Powell is perfectly respectful and fatherly toward the smitten Reynolds in the film's early going, but he never switches gears to transform into the romantic lead. He remains essentially paternal throughout, which makes the situation a little extra... icky.

For his part, animator-turned-comedy-director Tashlin keeps all the chatter snappy -- aided capably by the well-oiled supporting cast -- but he really only gets to let his visual imagination fly in a late-film dream ballet, where Susan is trapped in a birdcage and watches Mark get ensnared by Isabella in full spider gear. It's one of the reasons that the second half of the film is a lot more fun. In fact, Susan Slept Here wraps up well enough that it makes all those early difficult leaps of logic -- and concessions to '50s cultural attitudes -- feel entirely worth it 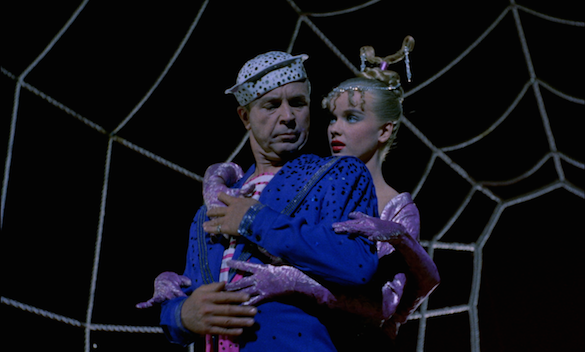 The Video:
Though it's not a particularly lavish production, Susan Slept Here utilizes early Eastmancolor effectively and this AVC-encoded 1080p 1.66:1 transfer beautifully captures the vividness of the original color camerawork. No dirt, no damage. Excellent fine detail reproduction, and no discernible digital compression issues. Absolutely outstanding.

The Audio:
The DTS-HD MA 2.0 mono audio has also been perfectly remastered, with no pops, hisses, or damage. The soundstage is predictably narrow, but the fidelity is particularly strong, considering the age of the film. English SDH are provided as the only subtitle option.

Final Thoughts:
Susan Slept Here twists itself in a lot of knots, trying to make its April-December romance work within the era's social mores -- and within the Production Code. The film is more fun once it's gotten all its expositional loopholes laid out and it can just serve up the comedy. Dick Powell and Debbie Reynolds aren't the most likely romantic partners, but their comedic abilities make the film an awful lot of fun to watch. The new Blu-ray looks and sounds fantastic. It's a cinch that this one comes Recommended. 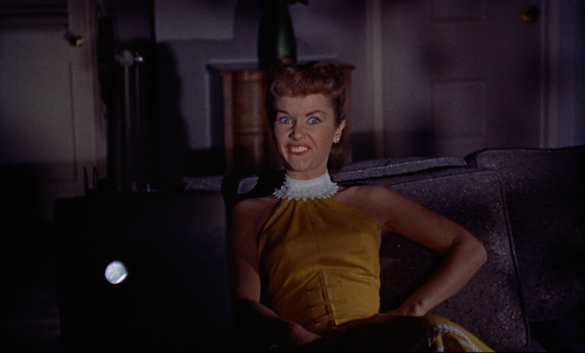