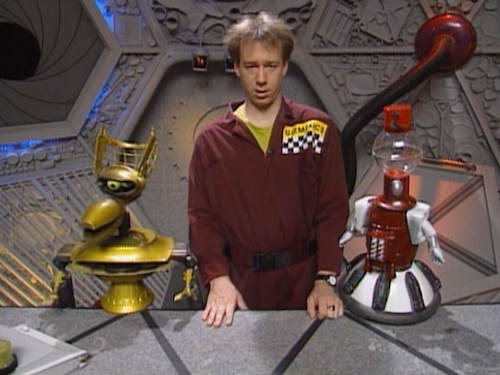 Shout! Factory continues its efforts to get the old, '00s-era Mystery Science Theater 3000 four-DVD sets back in print. As with their re-release of the first MST3K DVD set last year, the new version does not attempt to replicate the fancy packaging of the old, Rhino-released version, but it comes with a cheaper price tag than most newly-released MST3K sets. (And the asking price is cheaper than what you'll generally find on eBay for the Rhino sets. As the new box copy reads, "Take that, third party sellers!")

For folks unfamiliar with MST3K's alchemical genius that turns cinematic cheese into comedy gold, here is my rundown of the show's backstory from the Vol. 1 review: A mad scientist, Dr. Clayton Forrester (Trace Beaulieu), and his daffy sidekick, TV's Frank (Frank Conniff), conduct experiments on a poor unsuspecting employee (show creator Joel Hodgson as Joel in the first half of the series; the series' long-time head writer Michael J. Nelson as Mike in the second half) by sending him out into space indefinitely, on a ship nicknamed the "Satellite of Love" (presumably after the Lou Reed song?) while forcing him to watch terrible movies, supposedly to "monitor his mind." The original test subject, Joel, was a handy sort of a guy, so he managed to construct a bunch of robots to keep him company. Crow T. Robot (usually voiced by Trace Beaulieu), a gold spray-painted collection of odds and ends, and Tom Servo (usually voiced by Kevin Murphy), a sentient gumball machine, sit in on the B-movie madness and trade heckles and asides that often incorporate pop culture references, both familiar and WAY obscure. The giant puppyish cyclops Gypsy (usually voiced by Jim Mallon) helps keep the ship running while the unheard, typically unseen Cambot... well... he records the show.

While the first DVD set was somewhat hit-and-miss, ironically making it not ideal as the first batch of episodes one should use to explore the series, this second volume is a total winner. It contains two episodes from the third season, hosted by Joel, one episode from the sixth season, hosted by Mike, and a compilation disc of seven short films from various episodes where the main feature was on the short side. Let's check it out. 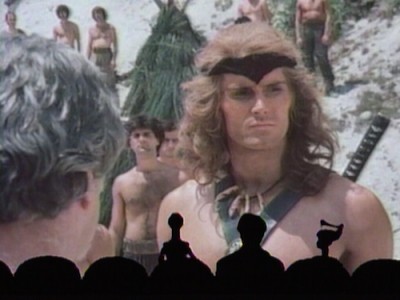 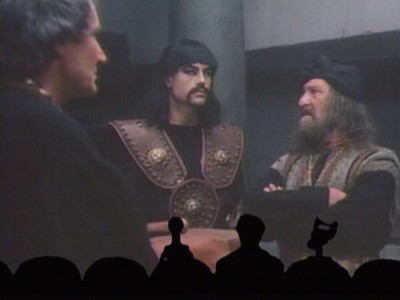 Tarzan, the Ape Man's Miles O'Keefe appears as a muscle-y mock-Conan in this re-edited second entry from a series of Italian-made sword-and-sorcery movies from the '80s. The plot of this would-be epic is pretty much incomprehensible, so please don't ask me to make it make too much sense. There's a wise old guy, who has discovered or created a powerful element that he is worried will fall into the hands of a rampaging warlord. He sends his easy-on-the-eyes daughter to go fetch Miles O'Keefe to protect the thingamabob from falling into the wrong hands. There are swordfights and snake fights and fights with invisible bad guys (no, for reals) on their way back to the wise man's castle.

Since the film has stilted, protracted dialogue scenes up the wazoo, the Satellite of Love crew have a lot to play with here. Anachronistic gaffes are frequently pointed out, such as a background actor wearing sunglasses, obvious tire tracks on the ground during the climax, and Miles O'Keefe's implausible construction of a modern-style hang glider. Fog also becomes a significant recurring cast member; this inspires the robots to quote Robert Frost poetry and make cracks like "We're getting close to Ridley Scott now." There are a few slow patches, just because the film itself is so damn boring, but it's a fun episode as a whole. 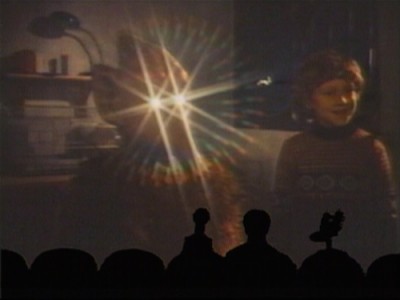 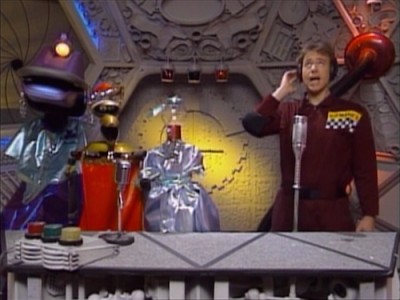 One of the all-time classic episodes of MST3K, in this reviewer's humble estimation. Starting with an "experiment" that is at least three films at once, this episode is jammed with jaw-dropping ridiculousness. In the "alien invasion horror" thread of the movie, some poachers happen to be in the woods when an alien craft crash lands. One of the poachers finds a cache of eggs and tries destroying them all, but is killed by a bad, bad alien. In the "ripping off E.T." thread, a little boy finds an unbroken egg from the crash site and takes it home to be his new best friend. In the confusing third thread, which is kind of like Eddie and the Cruisers meets a cabin-in-the-woods movie, mediocre musicians find themselves stranded in the middle of the same woods and get picked off by the bad, bad, not good alien.

The commentary and sketches in this one are a laugh riot. The host segment where the cast mocks a horrible recording session sequence from the film had me gasping for breath. The episode is also packed with hilariously effective running gags. The musical score is consistently mocked for its synth-y new-age vibe. The Dennis Weaver show McCloud is referenced far more often than it has any right to be. And anyone who feels compelled to ask "Can you hear me?" whenever the name Tommy is called out will feel utterly satisfied. 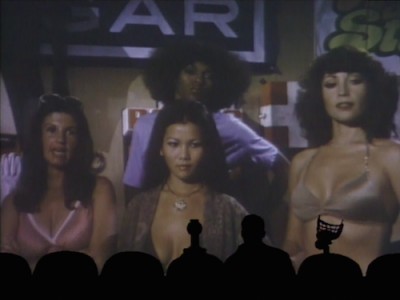 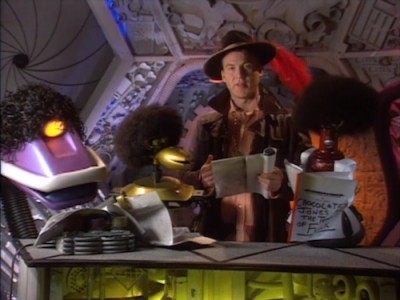 A blatant rip of Charlie's Angels that tries to stand out by doubling the number of foxy crime fighters to six. Another big difference here is that this crew is all amateurs: a school teacher, a pop singer, a stuntwoman, etc. They are on the trail of a big drug smuggling operation, led by Jack Palance and Peter Lawford. The puzzling cameos don't end there, though, because there's Arthur Godfrey as himself, Green Acres' Pat Buttram as a hick used car salesman, and a Gilligan's Island two-fer, with Alan Hale, Jr. as the pop singer's manager and Jim Backus in a cringeworthy turn as a batshit gun nut.

This is another first-rate episode that benefits from having a completely risible movie as its foundation, coupled with a rat-a-tat barrage of first-rate jokes. Crow's early announcement that he's just "going to give in and look at the breasts" is sure to inspire a blurt-laugh from all whom you love.

Interesting side-note: during the end credits, the SOL crew starts riffing on the disco closing song and how it makes them think of the Village People movie, Can't Stop the Music. Over a still of the female cast members, Mike asks, "Hey, where was [Can't Stop costar] Bruce Jenner in this shot?" Servo replies, "He's the one on the left." This little nonsensical back-and-forth is now oddly resonant. 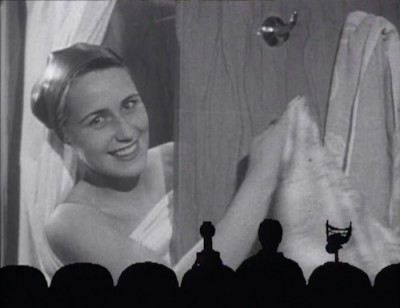 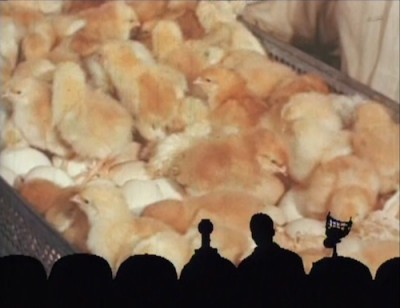 Man, do I love it when MST3K does short films. They pretty much always tackle '50s-era educational and industrial films, whose special brand of stiltedness is a true delicacy worth savoring for bad-movie fans. These films are essentially propaganda for the status quo, and Joel, Mike, and the bots never fail to emphasize how blatant and silly the shorts are in their promotion of conformity.

The blandly titled "Body Care & Grooming" and the queasily titled "A Date With Your Family" both are designed to curb teenagers' desires to be rowdy or express themselves. "The Home Economics Story" and "Why Study Industrial Arts?" both romanticize the soul-crushing and terrible jobs that teenagers should train for and look forward to. "Cheating" shows how a student's world can come crumbling down when he stops studying algebra and starts cheating off of a friend. "Junior Rodeo Daredevils" is just what it sounds like: young kids doing rodeo, and mostly getting the stuffing knocked out of them. Lastly, the "Chicken of Tomorrow" promotes all the wonderful benefits of early factory farming. This seven-short compilation is a bumper crop of dated silliness, freshly mocked. 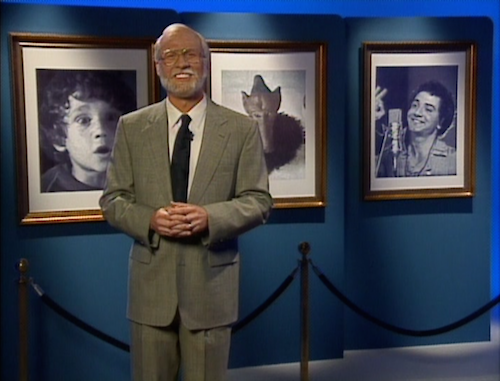 The DVD
The 4 DVDs of Mystery Science Theater 3000: Volume 2 come packaged in a standard-sized keepcase, housed on two sets of back-to-back hubs.

The Video & Audio:
As ever, MST3K is not a show that looks or sounds particularly sharp. This is partly due to its early '90s vintage and partly due the rarely-first-rate video masters supplied to the show for riffing. That said, the show's standard 1.33:1 video and Dolby 2.0 audio are perfectly watchable and understandable. No subtitles, but each episode has English closed captioning.

Special Features:
Nothing new has been cooked up this time around. There are just some opening and closing Mystery Science Theater Hour wrap-arounds for Cave Dwellers and Pod People, hosted by a heavily made-up Mike Nelson. These were used in the syndicated, split-in-half versions of these episodes.

Final Thoughts:
A faultless collection of feature-length episodes and shorts from one of TV's finest and funniest comedies. There's not an underperformer in this bunch. Highly Recommended. 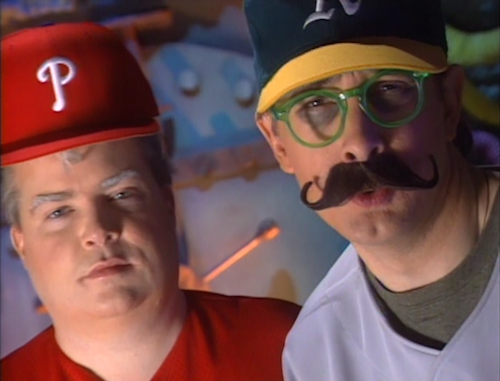