Here comes another review of Roots that emphasizes how important of a cultural and social milestone the miniseries was when it premiered in 1977. Some clichés exist for a reason, and are so attached to the subject at hand, that it becomes nearly impossible not to include them in the conversation. Roots was such a cultural juggernaut, that almost everyone who was around to see it when it was first broadcast have their very own "Where were you when Roots aired?" stories. 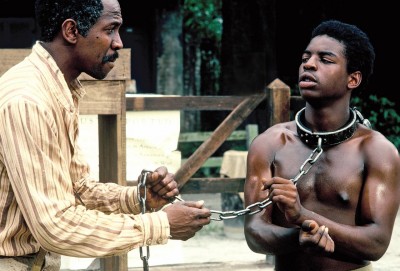 Based on Alex Haley's book where he tracked down his ancestry all the way down to his relative Kunta Kinte, who was captured in Gambia and was sold to slavery in the USA, Roots was a wake-up call for America regarding the country's ugly history of slavery. It was so effective and unflinching in the way it showed the horrific harm that the practice had on many generations, that it horrified white people in two separate ways: 1- They were appalled at how terribly their ancestors treated black people, and 2- They were afraid that black people who saw the show would be so distressed that riots would break out in the streets.

Of course, just like many other pop culture events where white people though people of color would go crazy and start a race war, nothing close to it took place. Many black people were somberly reminded of how horrible their ancestors had it, many felt angry, but many looked at it as a form of opening the wounds so they can finally begin to heal. Roots was the first mainstream project that dealt with this dark spot on the country's history, and without it, I doubt that even more unflinching depictions of this period like 12 Years a Slave would be made.

What's surprising about watching Roots today is how truthful it was willing to be, especially considering it was a network miniseries in the late 70s. It didn't shy away from the language at the time, especially when it came to the dreaded n-word, and found ways of depicting the horrid violence committed to the slaves. The many whipping and torture scenes couldn't show the kind of graphic detail that contemporary features can, forcing the producers to rely on the many talented actors to communicate the intense pain the slaves at the time must have felt. In a way, such an intimate approach sometimes makes the experience more relatable.

The only clearly negative aspect I can find about Roots is that the first couple of episodes, the ones about Kunta Kinte's story, are so powerful, that the generations that follow him have trouble catching up to the emotional intensity of that story. Of course, this has a lot to do with Levar Burton's passionate performance as young Kunta, who's snatched away from his family and systematically beaten into submission until he was broken enough to do the white man's bidding. The infamous whipping scene where Kunta is forced to embrace his western identity is still one of the most heartbreaking sequences even created in TV history. John Amos, who played the old yet still rebellious Kunta, ends this formidable character's story in a soulful way.

This isn't really a knock on the stories of the generations that came after Kunta, but first time viewers shouldn't expect the same dynamism after being enchanted and disgusted by Kunta's story (Although Ben Vereen as Chicken George is another famous figure in pop culture for a reason). That being said, one of the most impressive touches in the miniseries is that it shows how black people struggled to gain their true freedom even after they were freed from slavery. The last couple of episodes focus on the first days of the KKK, led by a fairly typical villain played effectively by Lloyd Bridges.

The ending of this storyline still splits many viewers. In fact, one of the reasons Quentin Tarantino decided to make Django Unchained was because he was disappointed at the ending of Roots and sought to make a film about a slave taking violent revenge against his oppressors. The frustration behind the ending for people who were clamoring for some kind of a catharsis after watching entire generations be tortured and beaten is understandable, but the message of Roots is one of peace and forgiveness. It's the Martin Luther King Jr ending, invoking words often attributed to him, "An eye for an eye leaves the whole world blind". 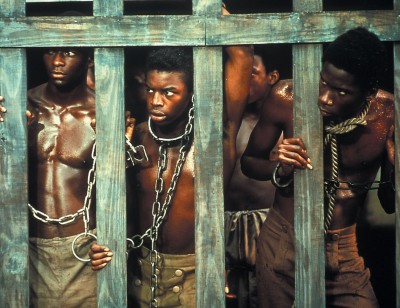 Roots was a huge production for a TV show at the time, and it looks like producer David Wolper was aware of his project's longevity while putting it together. The fairly impressive and detailed cinematography would not have impressed as much on a tiny screen, in blurry SD, in 1977. Yet on Blu-ray, it finds new life with an impressively clean and detailed 1080p transfer that retains enough grain to give the experience a film-like feel.

The DTS-HD 2.0 track shines, especially during the dynamic score that incorporates African themes. The mix seems to be mono, even though the sound is coming out of two channels. It would have been more uniform if it was a 1.0 track, but nevertheless, this is as close to a perfect audio presentation that Roots will get.

The American Story Continues: A half-hour new featurette with interviews by Hollywood and DC figures like Whoopi Goldberg and Tavis Smiley, talking about how Roots affected them. Each story is very similar, but the passion from these fans makes this a worthy view.

The Cast Looks Back: A new thirty-minute retrospective of cast members talking about the shooting experience and the series' cultural impact.

Crossing Over: This 20-minute featurette from the original DVD release goes over much of the same points as The American Story Continues, about the show's importance at the time. However, this one goes a bit deeper into recent African-American history as well.

Connecting With The Past: A 13-minute featurette about how Alex Haley uncovered his ancestral history.

The Struggle to Make Roots: A 22-minute featurette, again from the original DVD release, about how hard it was to get Roots on TV screens. This was one of the most fascinating extras on the DVD, and is very welcome here.

LeVar Burton Screen Test: Burton's passion for the role is evident even during this rough screen test.

Alex Haley Interview With David Frost: This is the complete 37-minute interview. It goes over many of the same points as the featurettes, but is worthwhile to get an idea of the series' impact at the time.

One Year Later: This was a one-hour original show that followed Haley as he dealt with the reactions to the book and the series. The sequences involving Haley going back to his ancestral roots in Africa are worth giving this a look.

Almost forty years after its' first broadcast, Roots is still an important social milestone, an attempt at a band aid to heal the incredibly painful past of the US via the exposure of said past in an unflinching way. It also dated really well, especially for a TV show from the 70s (Stan Winston's solid make-up work really helps in this case). This excellent Blu-ray set, complete with great A/V transfers and compelling new extras, is highly recommended to both fans and newcomers.