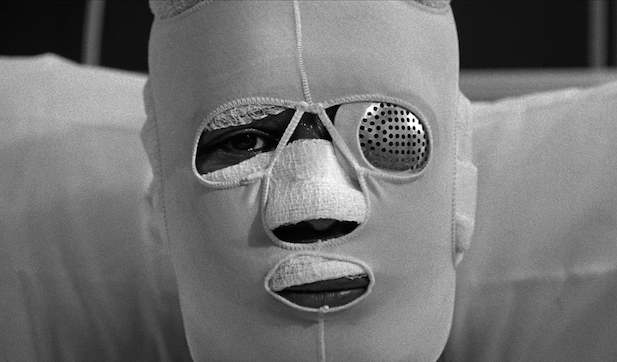 The 1993 psychological drama Suture is a fascinatingly rare example of a self-conscious style homage that isn't tongue-in-cheek. Writer-directors Scott McGehee and David Siegel (The Deep End, What Maisie Knew) have admitted to copping their style and plot from '60s mind-bogglers The Face of Another and Mirage (with John Frankenheimer's Seconds no doubt somewhere in the flick's DNA too), but they have no interest in vapidly evoking bygone movies. In fact, considering Christopher Nolan's breakout with the self-consciously stylish thrillers Following and Memento a few short years later, McGehee and Siegel now look like they were ahead of their time.

The film starts off with an intriguingly pulpy premise. Long-separated brothers Clay and Vincent are reunited after the death of their father. Clay is earthy and poor, Vincent is snobby and rich. Vincent pretends to welcome this brother that no one else knows about, but actually he intends to take advantage of the fact that Clay is his spitting image. Vincent gives Clay his clothes, his watch, his car... and then he triggers a bomb to blow Clay up in the car at the same moment that Vincent is flying out of the country. Clay survives, but badly injured and with amnesia. With no evidence of Clay ever existing, not even in Clay's own mind, the people around his hospital bed try to get him to remember details of his life as Vincent -- including the murder Vincent is suspected of committing.

On paper, that's a solid start to a mildly ambitious genre flick, but the makers of Suture have more on their mind than just meat-and-potatoes storytelling. They complicate the experience of viewing Suture with two major experimental choices. Their most obvious artsy conceit is the use of black-and-white cinematography, which evokes the '60s films that serve as Suture's inspiration while also pleasantly making the film feel more timeless now, viewed twenty-plus years later. However, the conceit that still might scare off viewers adventurous enough to deal with the monochrome is the decision to cast actors in the parts of Clay and Vincent who not only don't look alike, but have different skin colors. America's first black president, Dennis Haysbert, plays sympathetic poor brother Clay while white journeyman actor Michael Harris plays sociopathic rich brother Vincent.

Academics and thinkpiece writers have plenty to unpack in the decision to have a black actor play a white character's doppelganger, especially considering the character's eventual preference for "passing" as the rich white man. But, to be honest, the film has little commentary to offer on race. Instead, McGehee and Siegel are much more interested in playing with the concepts of self and identity. The fact that we the audience constantly see Dennis Haysbert's unchanging, unmistakable features as his character within the story of the film is molded (both through plastic surgery and through psychological adjustment) to resemble a man wholly unlike himself, brings up the question of what makes one human different from another human. We can see that Clay is not Vincent, but what does it matter when everyone else in the world (including Clay) would rather be convinced otherwise?

Haysbert is sensational as Clay, making the character's circuitous struggle to regain himself sympathetic and powerful. Supporting him, Thirtysomething's Mel Harris is appealing as Clay's doctor-turned-love-interest (with the ridiculously on-the-nose name Renee Descartes), Sab Shimono is note-perfect as the kindly shrink who wants to make "Vincent" remember, Dina Merrill lends some Old Hollywood credibility as Vincent's mother, and Police Academy's David Graf is relatively restrained as the cop who wants to bring Vincent/Clay in for murder.

Suture is ultimately a handsomely mounted mind-teaser that plays around and provokes its viewers much more often than it offers substantive food for thought. But as a smarty-pants lark, this one's a real doozy.

The Video:
Sourced from a new 4K restoration, this AVC-encoded 1080p 2.35:1 transfer is outstanding. The image is crisp and clear, with nuanced contrast and remarkable depth within the widescreen image. The liner notes booklet makes note of isolated, irreparable moments of damage to the film elements but it is never particularly noticeable; the film looks clean and stable throughout.

The Audio:
Executive producer Steven Soderbergh is a notorious stickler for sound design, and one imagines he had some input on the surprisingly layered LPCM 2.0 stereo audio mix we have here. There are moments of distinct separation between the two channels, with directional effects, and in general, each space within the film has a distinct sonic signature. Dialogue is crystal clear, and the musical score and source cues (including a memorable cover of "Ring of Fire" by Tom Jones) are well-supported and full-sounding. The disc offers one subtitle option: English SDH.

- Steven Soderbergh brings his long, lamented hiatus from commentaries to a close, as he interviews directors Scott McGehee and David Siegel about the nut and bolts of production, their relationship as collaborators, and the experience of making a first feature.

Final Thoughts:
Suture arguably plays better now than it did in the '90s. Its blatant homages and blithely surrealistic mind games feel relatively restrained and not so nose-thumbingly precocious in the current movie landscape. Some viewers are likely still going to reject the film's conceits, but those folks probably aren't much fun to hang out with anyway. Highly Recommended.