Under the Sun of Satan (The Films of Maurice Pialat: Volume 2) 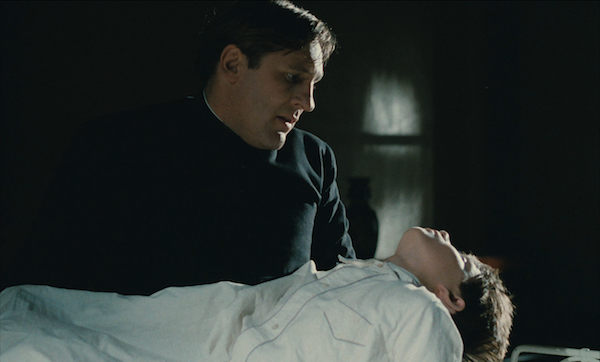 In this second volume of their Films of Maurice Pialat series, Cohen Film Collection has chosen to follow-up their initial triple feature of Pialat's work with a stand-alone feature, Under the Sun of Satan (Volume 3 is also going to be a single film, Van Gogh). Based on a novel by Georges Bernanos (Diary of a Country Priest, Mouchette), Under the Sun of Satan (Sous le soleil de Satan) is Pialat's only film to win the Palme d'Or at the Cannes Film Festival. Somewhat famously, the crowd was split between cheers and boos at the award ceremony, and Pialat raised a defiant fist at his unseen detractors as he accepted his prize.

This kind of behavior helps to feed into the vision of Pialat as "the French Cassavetes," although (for better and worse) Under the Sun of Satan feels far more like Pialat's version of a religious Bergman film, complete with moody Sven Nykvist-like cinematography. Gérard Depardieu is downright astonishing as Father Donissan, a rural priest whose violent internal struggle with his faith either indicates he is becoming a saint -- or just going insane. His dean, Father Menou-Segrais (Pialat, in his final film role) tries to convince Donissan that his way of thinking is archaic and that no one benefits from his suffering. Nonetheless, a scene or two later, we see Donissan whipping himself with a metal chain, behaving as though this is a typical morning ritual.

While the film initially appears to take a realistic, detached approach to its story -- putting it in line with many of Pialat's previous films -- a series of mystical and metaphysical elements start to creep in. Jean-Christophe Bouvet is shockingly powerful as a horse trader who meets Donissan, walking late at night, and gradually reveals himself to be an agent of Satan, sent to thwart the poor, addled priest from his purpose. The film leaves room for interpretation that this episode might represent a moment where Donissan begins to lose touch with reality, but Pialat never tips his hand, having the actors play the scene totally straight. Closer to the end of the film, Donissan appears to perform an outright miracle, confirming his status as a would-be saint.

Donissan also has the power to see into the soul of a young woman, Mouchette (Sandrine Bonnaire), who is pregnant by one of two possible older lovers. She tries and fails to convince both of them to support her, and ends up wrecking at least one of their lives. When Donissan tries to speak with Mouchette about the nature of her sins, of which he knows everything, he muddies the water rather than clearing things up for her.

As someone who was not raised in the Catholic faith, I found myself frequently suspecting that the film was riffing on religious concepts outside my ken, which kept me from appreciating it fully. Assessed purely on a performance level, Under the Sun of Satan is full of consistently intense, layered, and magnetic work. The performances are certainly among the finest of Depardieu and Bonnaire's respective careers. So inevitably a disconnect occurs, where one is drawn in by the characters but also gets confused by -- and, sure, a little bored with -- those characters' lengthy philosophical and ecclesiastical ponderings. The artistry of the film makes it worth experiencing, even for those with no interest in religion, but I suspect a Catholic viewer -- or, better yet, a lapsed Catholic viewer -- will end up with a deeper appreciation than most. 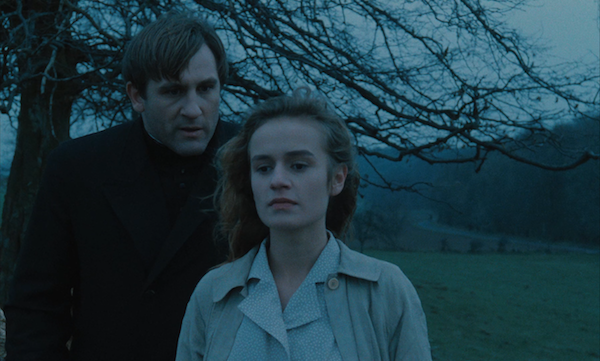 The Blu-ray
Under the Sun of Satan comes as a 2-disc set, with the feature on the first disc and all the bonuses on the second. Also included is a booklet with credits and color stills.

The Video:
The AVC-encoded 1080p 1.66:1 transfer is outstanding. While the film frequently sports a rather limited color palette, the level of fine detail and range of contrast are both excellent. Film grain is present, but nicely resolved. There's strong shadow detail in many of the darker scenes. No film damage, no significant digital compression problems.

The Audio:
As with volume one of the Pialat series, I feel the need to dock the audio grade a star for only providing a lossy (448kbps) option: French Dolby 2.0 mono (with optional English subtitles). Otherwise, the soundtrack is pretty much fine. It mostly consists of dialogue and silence with very little in the way of ambient effects. There are a few big music cues from Henri Dutilleux, and they fill the sonic space pretty well.

(HD upscale, 11:26) - A conversational interview with a laidback (slightly buzzed?) Depardieu, describing his relationship with Maurice Pialat and contemplating the themes of both the film and Bernanos's original novel.

Final Thoughts:
It's hard to deny that Maurice Pialat knows how to draw amazing performances from his actors. Under the Sun of Satan is no exception. Even so, I personally found the film less engaging than many of his other efforts, because the theological and ontological crises at the center of its drama didn't quite connect with a secular schmo like me. It's still a powerful enough drama that, if the premise and cast intrigue you, the film comes Recommended. 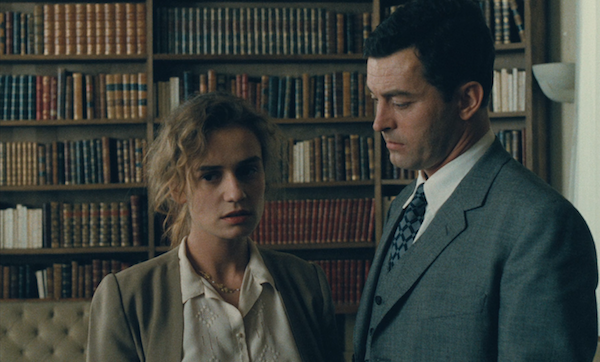