Maurice Pialat is not exactly a household name to American cinephiles, even with two films canonized by the Criterion Collection (L'Enfance Nue and À Nos Amours). This new triple feature of Pialat re-releases (similar to the Cohen Film Collection's recent packages for the Taviani brothers and Benoît Jacquot) should hopefully go a long way toward correcting that. Pialat's fondness for naturalistic acting and bold emotions have earned him comparisons to John Cassavetes, although Pialat is far more refined and less animalistic. These three films find Pialat searching for a way to connect with French audiences again after the surprisingly large success of We Won't Grow Old Together in 1972. It didn't work out for him then, but that certainly says nothing about the quality of these films: they are all sensitively realized, with rich characterizations and countless indelible scenes. 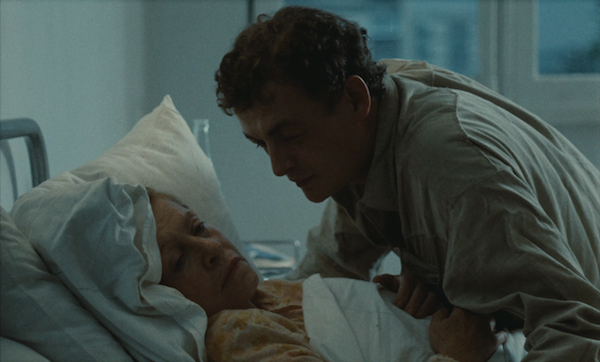 From first frame to last, 1974's The Mouth Agape (La gueule ouverte) is a personal film. Its story is told with such intimacy, and it is so minutely observed, that it absolutely must be derived from Pialat's own experience. As its morbid title suggests, the film follows the final days of an unassuming elderly matriarch, Monique (Monique Mélinand), as she succumbs to cancer. While death is a subject ripe for audience manipulation, Pialat does not load down his film with tear-jerking melodrama or convenient character arcs. Instead, he focuses on the banal inevitability of it all.

An early scene consists almost entirely of Monique and her adult son Philippe (Philippe Léotard) listening to a recording of Cosi Fan Tutte; they do not exactly connect over it, but they share a moment nonetheless. If this unbroken take initially seems puzzling, it gradually becomes evident that this is basically the last glimmer of happiness -- or at least contentedness -- the characters will experience together. There is another long unbroken shot much later in the film of Philippe and his father Roger (Hubert Deschamps) standing over Monique in bed, watching silently as she stares off glassy-eyed, breathing loudly and with much effort. Once again, these characters are sharing a moment, but all three of them are in their own little orbits.

When not focused on Monique's decline, much of the film is taken up with Roger and Philippe's lecherous tendencies. Even as his wife lies dying, Roger spends time with a former childhood sweetheart and gives dirty old men a bad name by groping a young customer in his fabric store. Philippe clearly learned a move or two from his father, hitting on his mother's nurses while his wife Nathalie (Nathalie Baye) is in the other room and picking up prostitutes when she's away at work. Pialat and cinematographer Nestor Almendros (Kramer vs. Kramer, Days of Heaven) film these encounters with quiet detachment, neither condemning the men nor justifying their actions. Pialat's masterstroke arrives once Monique actually dies and these characters have to confront emotions they were unaware they were suppressing. The film continues to avoid showy moments and easy catharsis, but the closing scenes underline and enhance the film's humanist side, elevating it beyond a keenly observed, downbeat wallow in dysfunction. 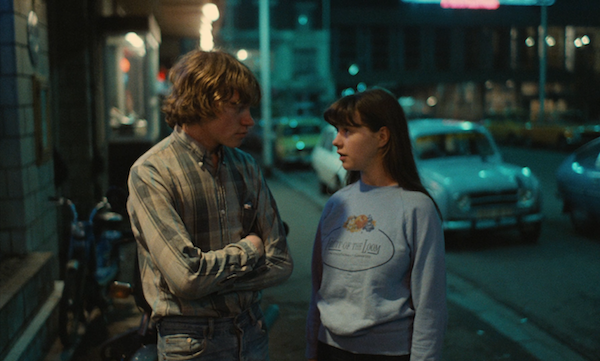 From the banality of death, Pialat turned in 1978 to the fatalistically aimless exploits of a group of high schoolers with Graduate First (Passe ton bac d'abord). The film's nonchalant take on the bed-hopping tendencies of bored nineteen-year-olds anticipates certain sexually blunt ensemble teen movies to come, like Fast Times at Ridgemont High and Kids, even if Graduate First bears only tangential resemblance to either of those later American flicks.

There's not much of an overarching story to be found here, apart from a few characters' shared desire to get out of their dead-end city in the north of France and all the other characters' shared desire to get it on with each other. The film percolates with little subplots -- like the inevitable disillusionment of a girl who decides to settle down and get married at age 19, or the recurring appearance of a middle-aged bar owner who tries to convince different teenage girls to sleep with him -- but it most frequently returns to two characters, Elisabeth (Sabine Haudepin) and Bernard (Bernard Tronczak), who are essentially cut from the same commitment-phobic cloth. Elisabeth enjoys the security of her relationship with the loyal Philippe (Philippe Marlaud) but can't stop herself from checking out other guys. Bernard doesn't even try to stop himself: he starts chatting up a new lady the moment his current girl is out of earshot, and he even makes a play for that aforementioned bride at the wedding reception.

There are certainly moments of humor throughout Graduate First, but it's arguable whether or not the film offers any hope for its young characters. The characters who decide they want to leave town do end up leaving town, which would be seen as a victory -- if not for the fact that these same characters have no money and no job prospects where they are headed. The characters who drop out of school decide to return and finish, but their stick-to-it-iveness is doubtful. The characters who put their faith in love and marriage just seem delusional. Fortunately, Pialat sympathizes with these misguided kids and doesn't condescend, which makes Graduate First as fascinating and enlightening as a fly-on-the-wall documentary rather than punishing like a strident after-school special. 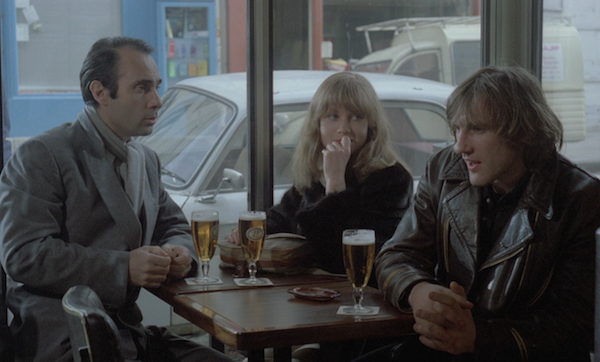 The 1980 film Loulou marks Pialat's first collaboration with Gérard Depardieu, who would work with the director three more times. Here, Depardieu is paired romantically with Isabelle Huppert, making Loulou the most star-studded entry in this collection, although their combined wattage is not enough to prevent this film from also being the least satisfying of the three. The Cassavetes comparison feels most apt with this film, both in the way that Loulou explores the illogical craziness of the human heart and the way the flick meanders and vacillates between striking acting moments and boring, shoe leather-y scenes of the characters just existing.

Even though she hasn't been given the title, this film really belongs to Huppert's character, Nelly. She's a middle-class lady who leaves her violent-outburst-prone husband André (Guy Marchand) after an impetuous sleep-over with cute, dopey ex-con Loulou (Depardieu). The sex is so good that it breaks Loulou's ramshackle bed, so Nelly starts renting a hotel room for the two of them to live and screw in. Since Loulou is unemployed, Nelly has to pay the bills, which opens the door for André to offer Nelly her old job working for him. She accepts, even if André's claims that Nelly being in the workplace will make it easier for him to get over her are fishy from the get-go. Unsurprisingly, Nelly starts to feel more sympathetic toward André, but when she discovers she's pregnant, she decides she can't leave Loulou. That is, until she asks him to find a job to support the kid and he keeps procrastinating.

The love triangle dynamic of Loulou brings to mind the early sections of Cassavetes's Minnie and Moskowitz and even his posthumously produced script She's So Lovely, except that the point-of-view in Loulou is much more opaque and puzzling than the direct, mad romanticism of those two films. After sitting with Pialat's loutish men with wandering penises for three straight movies, it's easy to see the autobiographical traits that Pialat has placed in these characters, but, despite the game efforts of the talented cast, he hasn't made their world or the narrative around them as interesting as the prior two films in this set. To steal a quote from Janet Maslin's review in The New York Times: "Loulou rambles considerably and hasn't a story as interesting as its characters - or its actors, whose performances are larger and livelier than the people they play." I couldn't have said it better myself. 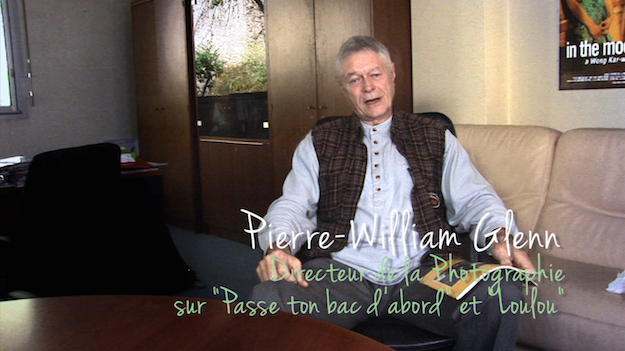 The Video:
All three films are offered in AVC-encoded 1080p 1.66:1 transfers and they are all quite strong. The first two films might have a slight edge, as their colors seem more vivid; Loulou looks a bit cooler and more desaturated. Loulou is also softer and doesn't have the same textured and tactile film grain look of the older two films. But, overall, all three films are clean, stable, and relatively crisp.

The Audio:
While there's no startling defects in the three French Dolby 2.0 mono audio tracks (with optional English subtitles), I still figure it's necessary to dock the audio grade by a star for only providing lossy (448 kbps) options. That noted, everything sounds good, with the dialogue effectively supported and the sporadic appearances of music cleanly presented.

(HD upconvert, 1:25:10) - A feature-length portrait of Pialat and his films, produced in 2007. The doc jumps around chronologically, often interpolating clips of films that inspired Pialat (some Ozu, some Ford, some Renoir) to the demonstrate how they were transformed into part of his work. It also shows how his real-life experiences found his way into his films. Overall, it's an engaging overview of this unusual director's career.


Final Thoughts:
Maurice Pialat was clearly a great, idiosyncratic talent. He was unapologetic and unflinching in the way he took the painful details of his life and distilled them into intensely powerful dramas. This set includes two outstanding films and one that is uneven but will still reward the patient viewer. The whole set comes Highly Recommended. 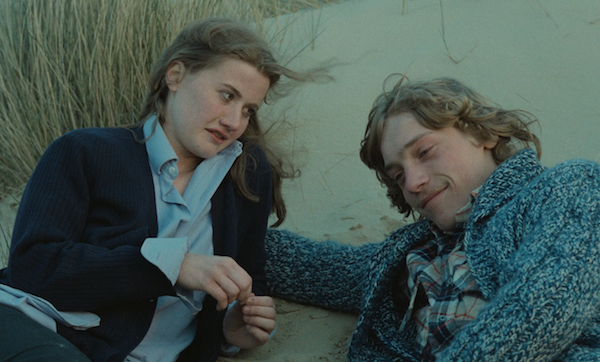