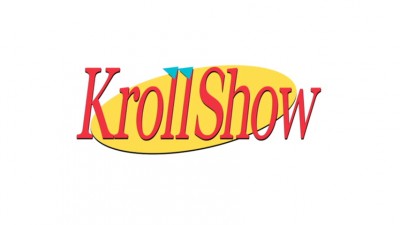 
The Story So Far...
In 2013, Comedy Central wisely gave Nick Kroll, of The League and numerous guest starring roles across TV and movies, his own sketch comedy show, where he could create bizarre characters and use them to parody television, particularly reality television. Unfortunately, he then turned around and ended the show after just three short seasons, choosing to call it quits before the quality of the show suffered. The first two seasons were released on DVD in December of 2014, and DVDTalk has a review of that set.

The Show
When it was announced that season three of Kroll Show would be there last, it was a bummer, considering the first two seasons were undeniable genius. Kroll's ability to create characters made each episode a smorgasbord of comedy, with no two personas feeling even remotely similar. That the same guy was behind the understated Canadian teen drama parody of Wheels, Ontario, humble broken-backed Larry Bird and the obnoxious club-going Bobby Bottleservice would be hard to believe, if it wasn't for Kroll's distinctive eyes.

In this final go-round, Kroll and his crew being back all the bits that made the first two seasons so entertaining, like elderly tuna prankster Gil Faizon, charismaless plastic surgeon Dr. Armond and whining PR flack Liz. Though he found new things and new reality shows for these horrible people to be a part of, so these shows aren't just repeating earlier episodes, as the season ticks down it becomes obvious that there was only so much left for the show to milk from Kroll's creations, with "Toilet Dad" C-Czar and the "Rich Dicks" becoming increasingly grating. (That said, if Wheels, Ontario was announced for the fall TV lineups, my DVR would be programmed immediately.) 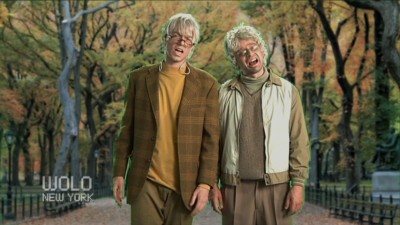 Though a few new additions made their way into the Krollniverse, including a police procedural called Dead Girl Town and Loser's Bracket, a tennis-themed dating show hosted by a desperate woman, none of them come close to making the impact of earlier entrants. This season is about providing endings to already established storylines (so to speak), including a conclusion for the long-running story of Dr. Armond's dead wife. Much of the wrap-up comes by having one character appear in another character's show (like Kroll's washed-up rock star Nash Ricky interacting with Jenny Slate's insecure 15-year-old Denise on the new series Karaoke Bullies.) Expanding on existing ideas is a big part of this season also, like how the season-long, globe-spanning Show Us Your Songs competition brings together a number of characters (while also allowing for several fun cameos from, among others, Bo Burnham, Kristen Schaal and Kurt Braunohler), and The In-Addition-Tos, a parody of The Expendables featuring Bobby Bottleservice's crew.

Though Kroll is naturally the core of the show, he's not going it alone, as the cast surrounding him is all-star caliber. Slate delivers some of the finest non-Kroll performances, including the ever put-upon attorney Ruth Diamond Phillips, while Jon Daly is the perfect foil for Kroll in all set-ups, with none better than the bad accent buffet of Pawnsylvania, which manages to top its fantastic previous editions brilliantly by taking a road trip to Baltimore, creating an ear-damaging trifecta. Meanwhile John Mulvaney is perfection opposite Kroll as the other half of his stereotypical New York pair, and regulars Jason Mantzoukas and Chelsea Peretti were tailor-made to fit into Kroll's over-the-top concepts. If that group of comedy superstars wasn't enough, the guest list that fills out the cast this season is a who's who: Casey WIlson, Adam Pally, Lauren Lapkus, Paul Scheer, Derek Waters, Kathryn Hahn, Bill Burr, Paget Brewster, Kate Micucci, Brett Gelman, Claudia O'Doherty, Paul F. Tompkins, Nathan Fillion, Kumail Nanjiani, Aziz Ansari, Retta and Maria Thayer. That's an incredible line-up spread through just 10 episodes, and they are all hilarious. 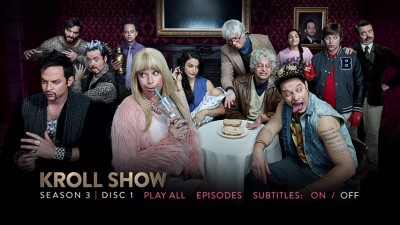 The DVDs
The third season of Kroll Show is split between 2 DVDs, which are packed into a standard-width, dual-hubbed keepcase. The DVDs offer static anamorphic widescreen menus with options to play all the episodes, select shows, adjust the setup and check out the extras. There are no audio options, but subtitles are available in English SDH.

The Quality
Like last time out, the anamorphic widescreen transfers are solid, with appropriate color across the board and good black levels. The level of fine detail is good for standard-definition, and there are no notable concerns about digital distractions.

Comedy Central continues to struggle aurally, giving this show Dolby Digital 2.0 audio tracks once again. Sure, there are no real problems with the way the show sounds, in terms of there being no distortion or missing audio, but getting just two channels of audio from a modern series feels primitive, even if there's some solid mixing utilizing the channels independently. You just expect more.

The Extras
The extras are a big disappointment following the first collection's selection of bonus content. Unlike that set, there are no commentaries to enjoy, and only one deleted scene (2:53), an episode of the Cheers parody Chairs, which only serves to show that Kroll and company aren't perfect, but they know enough to cut a scene that just doesn't work.

Beyond that, all you get are two brief music videos, for Bryan Lacroix' "Ottawanna Go to Bed" (1:28) and "Broin' Country" (1:40), from Bobby Bottleservice and Peter Paparazzo (featuring foot-obsessed Pitbull parody Senor Feeture.) There's not much of anything here that you can't watch in the episodes that featured these songs. 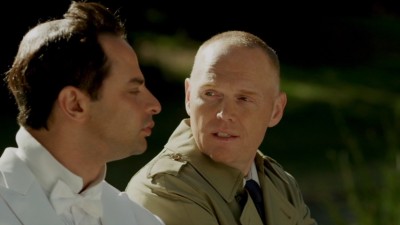 The Bottom Line
Kroll Show probably ended at the right time, as the show was not at its peak in season three, but even at less-than-optimal form, the show's characters were still massively entertaining, and the series boasted one of the best casts in comedy, resulting in plenty of seriously funny segments through this set. The discs look and sound very nice, but the extras are a let-down after the wealth of content in the previous set. While the show is great, owning it without added-value content is a personal decision.