In 1984, Danny DeVito directed and starred in the first feature-length movie made for Showtime. Peter Chernin, the head programming for the channel at the time, wanted something that "the broadcast networks would never touch," so what would be better than an all-out assault on network TV itself? Devito plays Vic DeSalvo, who made his fortune running a trucking company with mob ties in New Jersey, but having a life-long dream of breaking into show business moves to Hollywood to pursue that. He has a few ideas for TV series that he hopes to sell to the networks, but none of them will bite except for the upstart fourth network (two years before Fox made that a reality), MBC- whose shows often end up with a zero share in the national ratings. A scene at their affiliates' meeting showing off the upcoming shows for the season include a drama about garbage collectors and a sitcom about a guy who cross-dresses to get into the military amongst other high concept. They pick up Vic's show titled "Sittin' Pretty", a sitcom set at a college where a male student is accidentally assigned to be the third roommate of two sexy blonde female twins (played by the ubiquitous Candi and Randi Brough)- and after the initial lead drops out, Vic himself ends up taking it over, ensuring that all the ogling and rude comments will come through the way he envisions it! 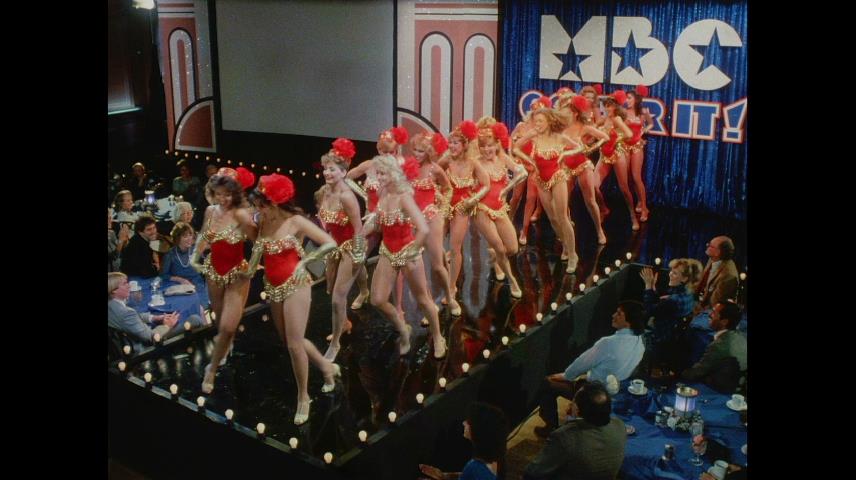 The only problem is that the premiere episode gets scheduled opposite a World Series game, which gets the largest percentage of TV ratings when it's on leaving everything else with numbers so small they're hardly worth counting, which is sure to be disastrous for the already low-rated MBC. If the first episodes don't get huge ratings, the show will quickly be cancelled and Vic's career essentially over. But if by some miracle it's a success, then this will be just the start of his rise to fame. The solution? Figure out how the ratings system actually works. The fictional Computron replaces the real-life Nielsen here, headed by Wes Vandergeider (Kevin McCarthy, who would play a similar role as an evil TV station president in 1989's UHF.) Vic becomes fast friends with a statistician for the company, Francine Kester (Devito's real-life wife and collaborator Reah Perlman) who does most of the heavy lifting there but always gets passed over for promotions in favor of Wes' bimbo-of-the-month and is kind of bitter about it. Through her, Vic learns the top-secret names and addresses of everyone who participates in the ratings and hatches a scheme to make sure his show comes out on top even against the World Series, and it's a little silly but it fits in with the general tone here.

Having wanted to work in TV earlier in my life (and being very glad now that I ended up not doing so), I've always enjoyed satires and parodies of the medium- my favorites being 1974's The Groove Tube which was a straight-out night of programming on a fictional TV network with fake shows, news and commercials, and 1976's Tunnel Vision which had plenty of those same parodies but wrapped a storyline around them (they were being viewed in court to decide whether the network should stay on the air or not). Both of those were rated R and gleefully pushed the content limits; "The Ratings Game" keeps the humor more high-brow in comparison and focuses more on the behind-the-scenes goings-on, though the satirical show promos we see early on are hilarious. Lots of familiar faces have supporting roles here, including an early appearance by Jerry Seinfeld as a network boss who reject's Vic's show ideas and Michael Richards (another UHF alum) as one of Vic's goons who helps pull off the scheme to have "Sittin' Pretty" sitting at number one in the ratings. Again the ultimate solution (which I won't give away here) is rather silly and the whole romance with Rhea Perlman's character feels a bit forced being that she was already DeVito's wife, but being made for cable TV "The Ratings Game" doesn't really ask to be held to the same standards as a theatrical movie might have. DeVito of course followed this up with the theatrical movies Throw Momma From the Train and The War of the Roses, both of which were hilariously dark comedies. His later effort Death to Smoochy was another attempt to satirize TV, which came out with mixed results. 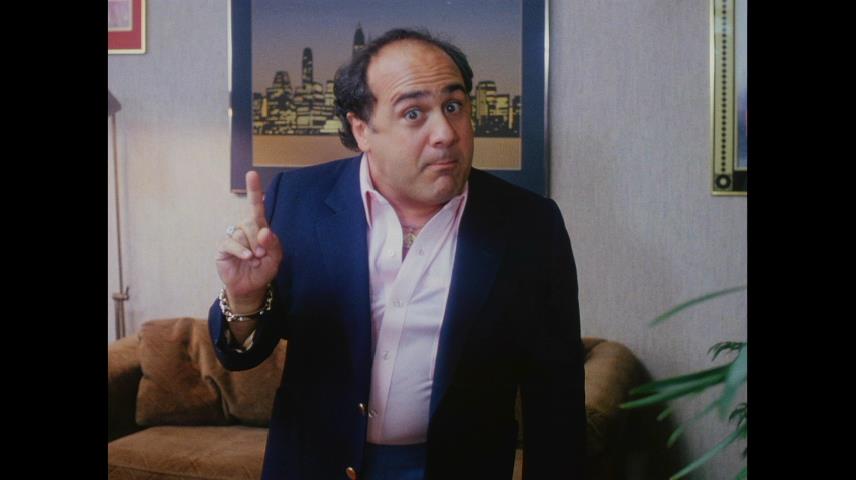 After playing on Showtime, Paramount released "The Ratings Game" on home video and it was briefly syndicated on broadcast TV in the late 80s which is where I first saw it (it turned out some broadcasters would touch it after all.) In the heyday of the DVD format, it was issued on one of the "bargain" labels unauthorized and re-titled "The Mogul." It wasn't considered very likely to see in a quality form again aside from Paramount's laserdisc, but surprisingly Olive Films has now put out a "Digitally Remastered Special Edition" Blu-Ray disc, with a new hi-def transfer of the movie. Presented in the proper 4x3 ratio transferred from very clean-looking film elements, it looks top-notch here and better than how it was likely ever intended to be seen. 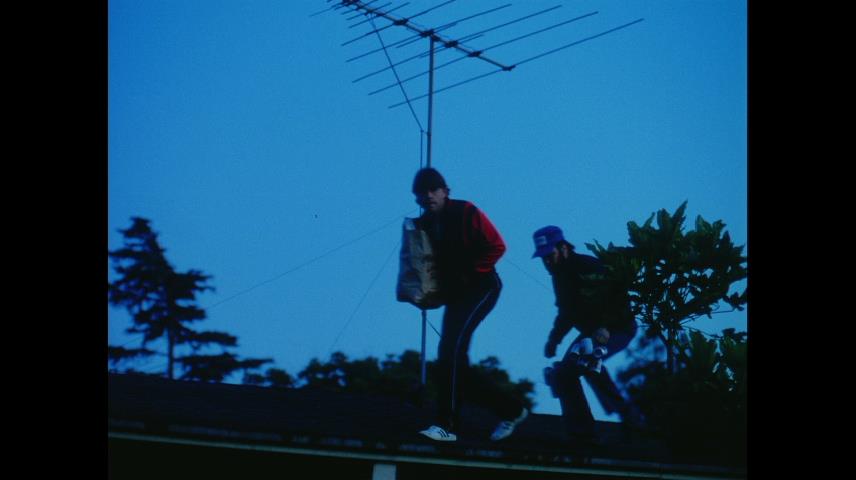 The mono sound mix is presented here in 2-channel DTS Master Audio and is about on par with most material made for the small screen at least before stereo became commonplace- most of the quality is adequate but not fantastic, and there is an annoying buzz present for several minutes that sounds likely baked-in to the original audio but thankfully goes away after a while. Olive again has mended their ways with hearing-impaired subtitles, including them here as they have in their recent releases. 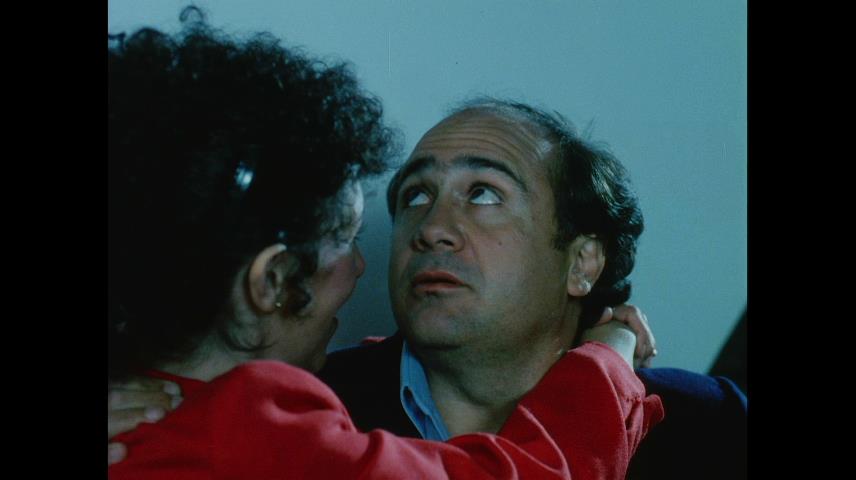 Danny DeVito has been a fan of "special editions" and released The War of the Roses and Hoffa on laserdisc in the early 90s with a wealth of extras that were uncommon at the time (most of which were ported to their DVD releases.) While he doesn't go for a commentary this time around, he's still managed to dig up a few extras for this disc- about six minutes of deleted scenes (including a hilarious bit where the MBC network head visits a psychic for advise) and a Showtime "Behind the Scenes" piece that originally showed on the channel in between movies- unfortunately the quality of this is quite poor, about that of a YouTube video, taken from a VHS source and at a slower frame rate. A Showtime promo of similar quality is also included.

More interesting are some "short films" directed by Danny DeVito prior to "The Ratings Game"- two of these are actually segments from an HBO comedy series called "Likely Stories" and one of these ("The Selling of Vince D'Angelo") was the catalyst for "The Ratings Game"- Showtime had wanted DeVito to make that into a feature-length movie but he opted for this instead. "The Sound Sleeper" is a 1973 black and white film with no dialogue and DeVito only behind the camera, and "Minestrone" is an odd one about a filmmaker made a few years later, where DeVito is credited as "Lodovico Muchello"- unfortunately that one looks terrible on this disc, taken from a low-quality analog master and showing lots of de-interlacing artifacts. A substantial printed insert is included too which was a nice surprise especially these days, it includes some liner notes, pictures and quotes from the movie, a complete list of credits and some notes on the extras as well. There are a number of typos in it, a picture of "Kevin McCarthey" even has a red line under the misspelled name. 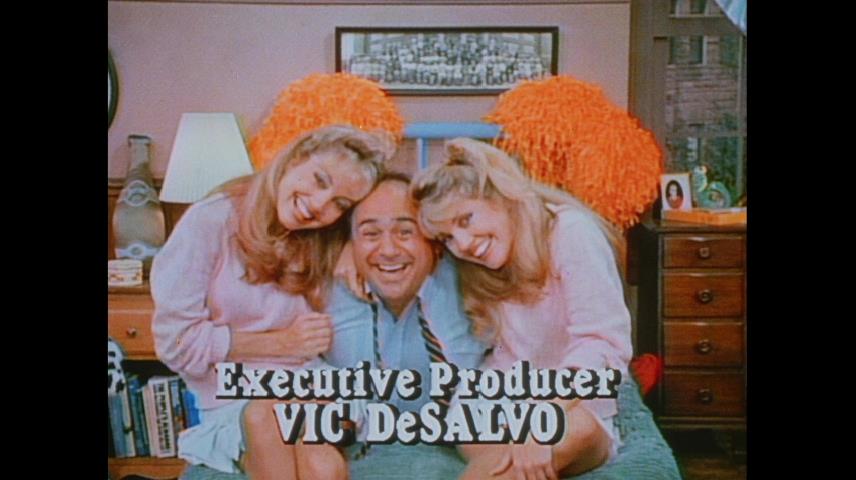 Critics at the time seemed to love "The Ratings Game" when it premiered and many say it still holds up today. Personally I don't find it to be a work of genius, but definitely worth a look for fans of DeVito or the supporting cast, the 1980s or television in general. Issuing a good DVD edition of this would have sufficed (and one is available separately), but it's simply incredible that this hi-def Blu-Ray was released as well.