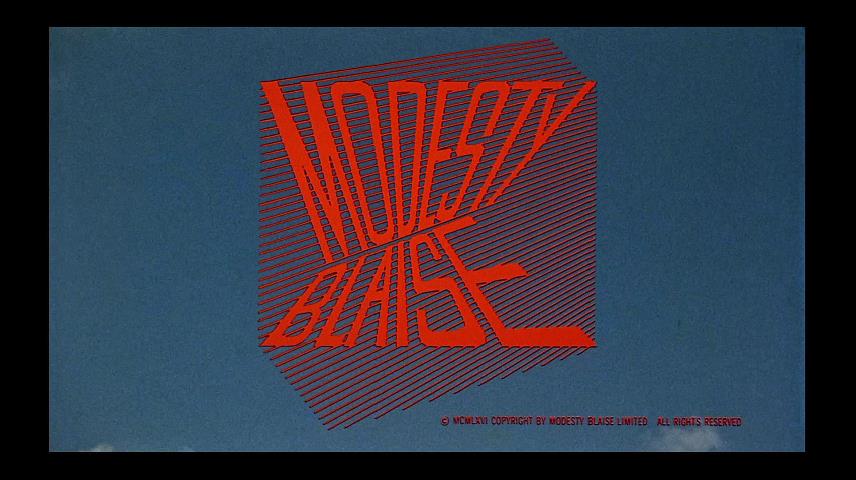 1966's Modesty Blaise is among the European spy films of that era from which the Austin Powers movies borrowed much of their material. Itself not meant to be taken entirely seriously it's based on a comic strip of the same name, made at a time when it wasn't common to make live-action adaptations of them. I had wanted to see this for a while and thanks to Kino's Blu-Ray release I finally have, but I came out of it not quite knowing what to make of it. Thanks in part to Glenn Erickson's review of the DVD that came out in 2002 as well as the new commentary track on this disc, I learned that I wasn't alone. To quote Erickson, it's "an interesting mess."

The plot itself is a bit hard to follow, especially if you're not familiar with the characters. As best as I can describe, it involves a shipment of diamonds that are worth a fortune to be received by the title character's mentor Sheik Abu Tahir (Clive Revill, in just one role in this movie). It's a given that there will be efforts to steal these diamonds while they're in transit, so Modesty Blaise (Monica Vitti), known as a master thief, is enlisted to make sure that doesn't happen. She agrees to help, but warns that if anyone is playing games with her then she'll just go ahead and steal them for herself. She then gets help from her sort-of platonic partner Willie Garvin (Terence Stamp), but the flamboyant master thief Gabriel (Dirk Bogarde) with his trusty assistant McWhirter (also played by Clive Revill) are out to capture the two of them as well as the stash of diamonds! 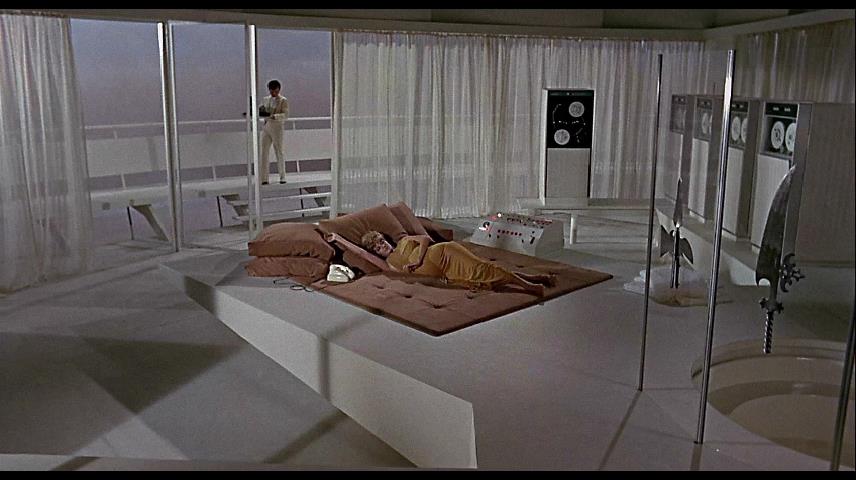 While Modesty Blaise is fun enough to watch and look at (mainly for the scenery and far-out set designs), it's not entirely clear exactly what the point is of many scenes, and it was a relief to find that this is a common opinion of it. There's plenty of chases, fights and hi-tech gadgets, but just don't think about them too much. Director Joseph Losey has been mostly blamed for how this movie turned out, as his other films weren't very humorous and here you're often left wondering whether scenes are being played for comedic effect or supposed to be taken seriously. One of Modesty's "powers" is that she can instantly change her hair from blonde to brunette at the snap of a finger, and through simple editing we see this happen- but it's not punctuated with any goofy music or sound effects so the reaction is more "huh?" than laughter. Later there's a car chase where both cars spew colored smoke- likely just because it looked good on film, never mind any other purpose it had. My favorite moment was actually one that many others found to be one of the worst- while Modesty and Willie are on the run, they stop to sing a playful duet about their future together. Perhaps if this had been an all-out musical, it might have turned out a bit better. The opening credits do feature a good theme song by pop duo "David and Jonathan", but this tune ends up wearing out its welcome as it's used in different variations throughout the rest of the movie- pretty much any scene where groups of people dance out in the open are set to this same tune (which happens in quite a few movies, and is something that I'm easily annoyed by. It's like they couldn't come up with any other music after finishing the theme!) 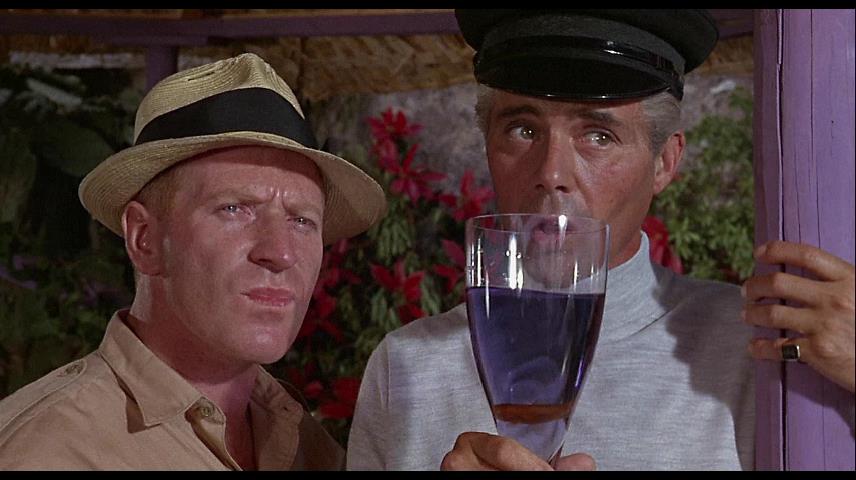 Framed at 1.85 (mis-labeled on the back cover as 1.66), this isn't one of the better transfers I've seen on Blu-Ray. While the picture is very clean, free of dirt and scratches, an excessive amount of edge enhancement and noise reduction has been applied here. (The picture also shifts to windowbox format for the opening credits, something else that annoys me given that I have my display set for zero overscan already.) Despite the movie's appealing visual style, the transfer made it a bit unpleasant to watch.

The quality of the mono audio track (encoded in 2-channel DTS Master Audio) is typical of optical sound from a film print- it's a bit distorted in parts with some noise and crackling, definitely sounding more "dirty" than the picture. Fox's DVD also had a stereo remix, but that isn't included here, and neither are the subtitles or closed captions which might have made the story a bit easier to follow. 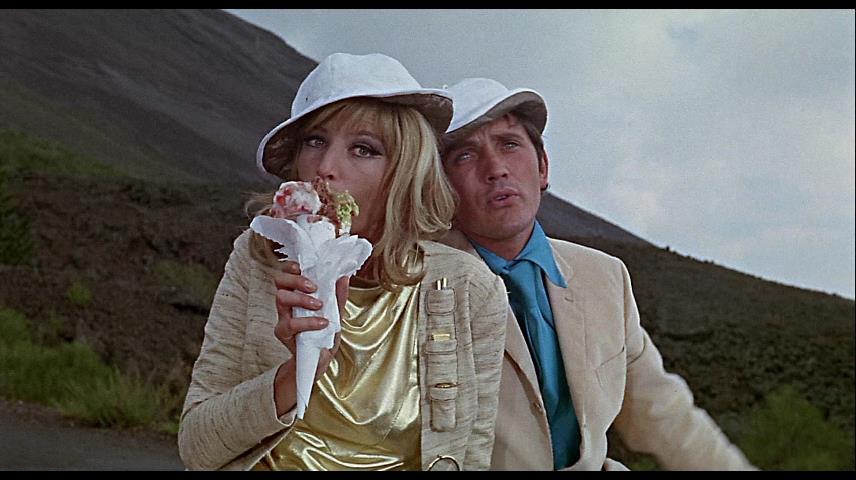 The highlight here is the commentary track done for this Blu-Ray disc with film historian David Del Valle and filmmaker Armand Mastroianni, both of whom seem quite knowledgeable about Modesty Blaise- I was surprised to find that Mastroianni is the director of the 1980 slasher He Knows You're Alone. They don't focus too much on what's happening onscreen (which would have helped me to make more sense of this movie) but do acknowledge early on that it's "difficult to follow." They share a number of stories and tidbits about the cast, filmmakers and some of their acquaintances that makes for interesting listening even if it doesn't relate directly to the movie.

Also included are newly-shot interviews with first assistant director Gavrik Losey (son of Joseph Losey), screenwriter Evan Jones and assistant art director Norman Dorme- these are all in 24 frames per second HD video which I'm definitely not a fan of. There's a still gallery of production and promotional photos including lobby cards, and finally the theatrical trailer (in standard-def) along with trailers for Fathom and Boccaccio ‘70. 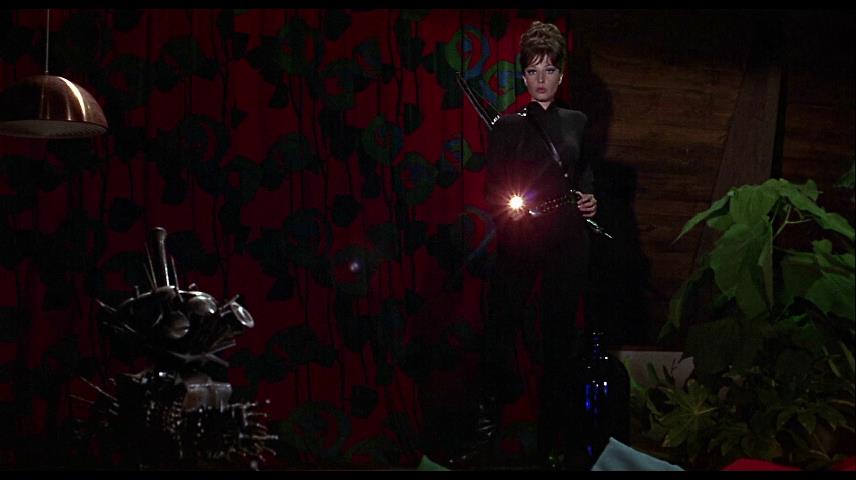 While Modesty Blaise fell a bit short of my expectations and clearly those of many others, in the end I still have to give this a Recommended as it's still one of those movies that is fun as long as you don't try to make too much sense of it, and definitely captures the 1960s. The only real caveat is the picture quality of this Blu-Ray, which may not be enough of an improvement over the previous DVD to warrant an upgrade for those who have that already.