Please Note: The screen captures used here are from the standard-definition DVD released in 2004, not from the Blu-ray edition under review. 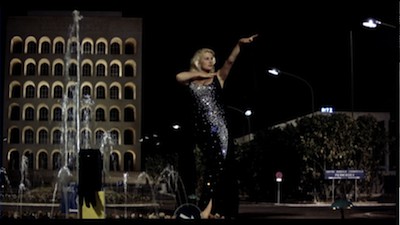 The concept behind Boccaccio '70 is a bit of a brain twister. Producer Carlo Ponti commissioned four of Italy's top directors to make a quartet of stand-alone short films centered around the broad theme of love and morality in the modern age. The approach was meant to call to mind The Decameron, a classic collection of tales with similar narrative concerns. Made in 1962, it was called Boccaccio '70 presumably because it was meant to show a progressive image, a suggestion of what relationships would be like in the far-flung future of eight years from release date. Presumably.

Regardless of intent, the finished product is an entertaining sampler of the best that Italian cinema had to offer. Boccaccio '70 is alternately serious and fun--literally, two of the movies are dramatic, the other two comedic, though all are poignant and have something to say. Each segment clocks in at around 50 minutes, making Boccaccio '70 over three hours in total. The filmmaking styles are different, but somehow cohesive. Despite each director putting his signature on his effort, Boccaccio '70 still looks like it was spawned from the same impulse.

And oh, what brilliant and impulsive directors they are: Mario Monicelli (Big Deal on Madonna Street, Casanova '70), Federico Fellini (8 1/2), Luchino Visconti (Senso), and Vittorio De Sica (Bicycle Thieves). Each had chronicled interpersonal relationships in their previous work, though with different hues--Monicelli's using satire to comment on class politics, Fellini positioning old morality against modern freedoms, Visconti's ever-present austerity--and those hues still shine through even in a group effort such as this.

The full Italian version of Boccaccio '70 leads with what I think is the strongest segment, Monicelli's "Renzo and Luciana." Ironically, it was the one cut from the worldwide release of the film, presumably to shorten the lengthy running time and also because Monicelli had not cast any globally recognized stars. It's the most down to earth of the episodes, following two factory workers in love. Renzo (Germano Gilioli) is an "errand boy" downstairs, while Luciana (Marisa Solinas) is in the secretarial pool upstairs. Their contracts strictly forbid them from getting married or having kids, so they sneak off to tie the knot. They are motivated out of love, it's not a shotgun union, though Luciana has a pregnancy scare right after.

"Renzo and Luciana" has touches of comedic exaggeration, but it's a fairly realistic depiction of young love in all its foolishness and struggles. Not getting caught having broken the rules isn't the only concern of the newlyweds, they also have to deal with limited finances, living with Luciana's parents, and the other difficulties of planning a life together despite the obstacles the world places in front of young people. Gilioli is a bit of a stiff, but Solinas is cute and charming and she plays well against her piggish boss, who is quite funny. Monicelli manages to detail the disparity of then-current class conditions without forgetting the romance. The story isn't full of sweeping passion, but it is hopeful. 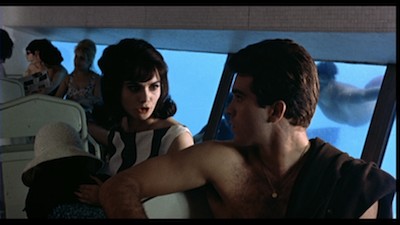 On the opposite end of the social ladder, unsurprisingly, is Visconti's segment, "Il Lavoro" ("The Job"). It stars screen legend Romy Schneider (Ludwig) as Pupe, a German heiress living in Italy with her philandering husband Count Ottavio (Tomas Milian). Ottavio has recently become a tabloid sensation due to his predilection for call girls, earning him the nickname Count Lech. Pupe is initially intent on leaving him and taking daddy's money with her, but over the course of a night locked in their extravagant apartment, she seduces her husband, threatens to leave him to make her own way in the world, and then turns the tables once more. Schneider is both sexy and heartbreaking, wrestling with a cat's cradle of emotions. Ultimately, Visconti is making a comment on the idea of marriage as a transaction, of the trades we make for love, how affection is its own kind of commerce. Ever aware of the rarefied lifestyle of his protagonists, he also subtly contrasts these rather high-class problems with the more immediate frustrations of the couple's servants, creating an upstairs/downstairs effect. Pupe and Ottavio seem silly and selfish fussing and fighting amongst wealth they have neither earned nor fully appreciate.

While sex is a serious matter in "Il Lavoro," De Sica's "La Riffa" ("The Raffle") is a more traditional bawdy sex comedy. Playing like a segment from Yesterday, Today and Tomorrow, this short reunites the director with his star of that film, international bombshell Sophia Loren. She plays Zoe, the barker at a shooting gallery in a traveling fair. To help out friends who have fallen on hard times, Zoe has agreed to let them raffle off a night in her bed to the locals at the fair's current stop. Naturally, once the men get a look at her curves, they buy up all 70 tickets without even blinking. The story follows these horny jerks throughout their day as they ogle Zoe and try to wheel and deal with one another; meanwhile, De Sica shows us just what a sweetheart Zoe can really be, as well as giving us flashes of her fiery temper. The story takes a twist or two as Zoe actually finds real romance while waiting for the lottery to be announced, leading to a bitterly humorous, heartfelt finish. Sophia Loren is, of course, gorgeous, but she's also a fine actress at the top of her career here. De Sica always knew how to get the best out of her.

Likewise, Federico Fellini had a great relationship with Anita Ekberg, who he made iconic in La Dolce Vita. His piece in Boccaccio '70 plays on that image and the scandals that Ekberg's buxom figure inspired. "La tentazioni del dottor Antonio" ("The Temptation of Doctor Antonio") is probably the most memorable of the episodes in Boccaccio '70, and it's also the most pointed. Fellini is taking direct aim at his censors and the self-appointed moral guardians who would deny the people their most fundamental desires. In Fellini's world, sex is not only flirty and fun, but it's good for you, too!

The story here is that habitual killjoy Dr. Antonio Mazzuolo (Peppino De Filippo, The Four Musketeers) gets all hot and bothered over a billboard that has been put up in the park outside of his apartment building. The massive advertisement features an image of Anita Ekberg enjoying a glass of milk in her boudoir, and a loudspeaker plays a loop of children singing a jingle extolling the virtues of the nourishing liquid. The connection between the drink and Ekberg's natural assets is obvious, and Fellini has a hoot tweaking the nose of his detractors by playing every suggestive angle (the most audacious being spraying Ekberg's painted cleavage with a hose). When Antonio's efforts to remove the advert fail, the doctor grows more obsessed. One night, he begins to hallucinate that the image on the billboard is taunting him, and when he confronts the painted visage of the actress, she steps off the canvas and begins to run through the city--a giant Anita Ekberg ready to topple Rome with her oversized sexuality. 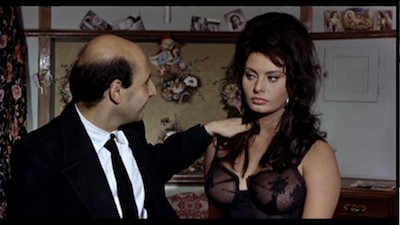 Video:
Boccaccio '70 was first released on DVD in 2004 by the now-defunct NoShame imprint; Kino has recently started re-releasing many of the Italian titles that distributor once carried, and the results have been stellar. Boccaccio '70's new 1080p widescreen image (1.85:1) offers a sparkling restoration, vastly improving on the previous home video release. The color looks fantastic, with well-rendered shading and the more painterly design common to Italian films of the period. While sometimes the background resolution can be a tad bit soft, this is likely a chronic problem in the source, since in other instances, the BD boasts an astonishing deep level of detail. In De Sica's segment, for instance, opening shots of the chickens and pigs are so clear, we can count the feathers and hair; later, the silky material on Sophia Loren's dress, as well as the mesh of her lingerie, both have incredible texture, you would almost believe you could reach out and feel it with your fingers.

And De Sica is not the only one to benefit. All of the selections have been given an incredible clean-up. Monicelli's nighttime shots of city streets look remarkable, like Edward Hopper paintings come to life. The large park area around the Anita Ekberg billboard gives Fellini's story a wide scope, while the tantalizing close-ups on the actress' face have a sensual intimacy. Likewise, the private moments in Romy Schneider's bedroom intensifies the restrained emotion of Visconti's story. At one point she wears a shimmery see-through robe that practically sparkles in the new transfer, like it was something out of a fantasy movie, and yet close-ups of Schneider after a bath show skin tones so realistic, we can see changes in her pigment.

Sound:
The film here is mixed in mono, preserving the original Italian soundtrack complete with the usual odd dubbing. (Is that Fellini doing the women's voices during his portion of Boccaccio '70?) Kino has done a good job of cleaning up the audio so that it sounds crisp, with no distortion or extraneous noise.

The optional English subtitles roll by at a readable pace and are written well.

Extras:
The only bonus features are a poster and stills gallery and the trailer from the original U.S. release.

FINAL THOUGHTS:
Highly Recommended. Anthologies are a tricky business. The common wisdom is that even if the collected stories have a thematic cohesion, there will be an inevitable varying in quality. This story will be awesome, the next one not so much. Not so with Boccaccio '70. The 1962 Italian quartet gives us four mini-movies (all nearly an hour) about romance and moral choices, and the results are funny, sad, and thoughtful. Then again, this is Mario Monicelli, Federico Fellini, Luchino Visconti, and Vittorio De Sica directing Sophia Loren, Romy Schneider, and Anita Ekberg. Should we really be surprised that the sum of these parts is so vibrant and entertaining? 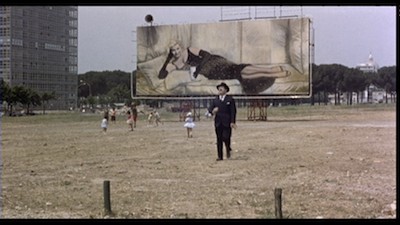