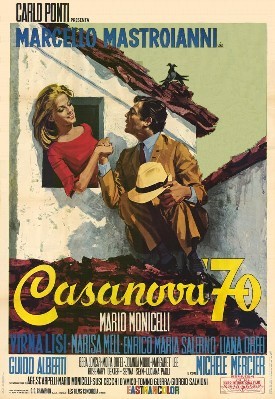 One in a string of sexually unfettered, iconically colorful Italian-language international co-productions produced by cinema impresario Carlo Ponti, Casanova '70--a 1965 film directed by Mario Monicelli (Big Deal on Madonna Street), co-written by Tonino Guerra (Amarcord) and starring Marcello Mastroianni (8-1/2)--is a retro-"modern," very lighthearted sex comedy conceived as a sort of follow-up to the popular, also Ponti-produced omnibus film Boccaccio '70 (1962), which freely imagined what kind of randy tales the Medieval-era Decameron author would spin for audiences circa 1970. (Clearly, these films, made years before the "'70" of their titles, meant to be ahead of their time.) Casanova '70, in its irreverent turn, moves ahead a few centuries, taking the image of the notoriously witty, womanizing 18th-century French author and gadabout and transposing it onto the hapless, handsome person of Mastroianni for a self-effacing farce that starts from a full awareness of how silly it is and then simply goes for as much primary-colored playfulness, winking suggestiveness, and wry humor as can be packed into two or so hours of film. 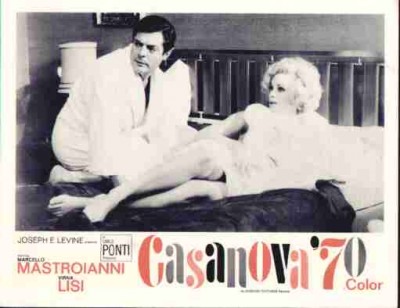 Mastroianni's character, Andrea Rossi-Colombotti, is a successful NATO official whose position mainly seems to involve jet-setting around to exotic European locales, looking dapper. He is never, ever at a lack for female companionship, but he has a problem: Unless there is some element of thrilling danger involved in his erotic encounters, he finds he is not up for them (pun fully intended; it's that kind of movie). His girlfriend having become impatient with the game-playing required to keep him turned on, he consults a psychologist (Enrico Maria Salerno)--who, with his imperious abstruseness, obsessive need to handle pencils and grind them in his sharpener, and taste for wearing black fishnets, may not be the expert most qualified for dealing with Rossi-Colombotti's prosaically heterosexual problem--and is advised, after a series of sketch-like flashbacks (one of which hilariously features Mastroianni playing his character as a teenager) reveals the lifelong evolution of Rossi-Colombotti's sexual pathology, to go stoically celibate and focus on the "higher" (literally, above-the-waist-and-neck), exclusively platonic charms of women. 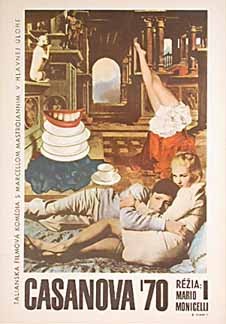 Thus, our poor thrill-seeker finds himself in temporary self-imposed exile in Switzerland, where he takes up very platonically with and gets engaged to blonde Venus Gigliola (Virna Lisi), who would have become a nun but for the fact that her punctiliously haute-bourgeois family wanted to keep their princess in the fold. But when a chance encounter with a whip-wielding female lion trainer (and her excitingly nearby killer felines) reignites his adrenaline-fueled sex drive, he strays from Gigliola, hooking up with a nymphomaniac whose betrothal to a reluctant fiancé has left her under the guard of a thuggish gang of peasants appointed to enforce provincial sexual mores, rendering the situation arousingly risky to Rossi-Colombotti; a town "pedicurist" whose reputation as a death-bringing jinx has driven away business but, of course, turns Rossi-Colombotti on; and the wife of a deaf old count (played by Dillinger is Dead director Marco Ferreri)--a woman who seems to share Rossi-Colombotti's taste for danger-fueled eroticism, and who uses her wiles to enlist his aid in bumping off her boorish, possessive, stuffy old man. (Gigliola is a blonde virgin always dressed in white, while the other women are darkly-dressed brunettes; yes, this is a self-consciously archetypical straight male fantasy, right down to the color code.) The countess's scheme lands Rossi-Colombotti in front of a judge, falsely accused of murder, and his parade of paramours (and the psychoanalyst, too) appears to sully his name and assert his guilt. All except Gigliola, true, pure, and innocent (not to mention virginal) to the end, and therefore finally deemed worthy of marriage once Rossi-Colombotti's lawyers get him off the hook. When we leave the happily-wed couple at the end of the film, Rossi-Colombotti is initiating the bemused but game Gigliola into playing out the kind of high-risk, aphrodisiac situations that will keep their home fires burning and ensure conjugal bliss well into the future--a "happy ending" if there ever was one (pun once again fully intended). 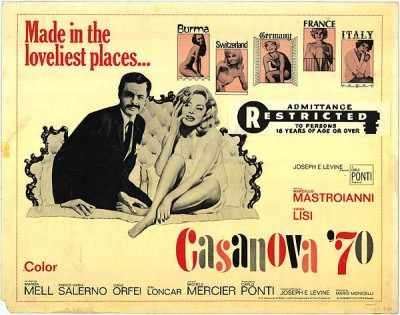 Like many self-consciously "modern" works from the past, one of the most striking things about Casanova '70 is how utterly retro its "modernity" makes it. The film is a sheer nostalgic indulgence that is simply lively, sexy, and genuinely light in a way that few films are anymore. (Even its flirtations with good old-fashioned sexism and homophobia are easily subsumed by the film's--and, in particular, Mastroianni's--self-deprecation; Casanova '70 is definitely bound by its era, but it does not have a truly mean bone in its body.) All of the actors appear to be having a wonderful time playing out their characters' hijinks and flair for endless self-dramatization, and the immensely appealing Mastroianni comes off as the forebear of George Clooney's perpetually shrugging, half-insolent, faux-befuddled "What, me handsome?" comic persona. (If you recall the bit of Alexander Payne's Election in which Matthew Broderick optimistically imagines himself a dapper European zipping around in a sports car, that's also Mastroianni redux.) Top all this off with the film's delighted, delightful revelry in its own artifice--reassuring us once again that rear projection and matte paintings, their fakeness ramped all the way up (that skyline in Hitchock's Rope!), can have an amazing cinematic beauty all their own--along with Armando Trovajoli's giddy score and the way Aldo Tonti's (Nights of Cabiria) cinematography picks up on every too-bold primary color in the comic-strip palette of Mario Garbuglia's production design, and it matters little that the film starts losing some its helium in its final quarter. You still have all the ingredients for one delectable bonbon of a movie, one that actually has the lovingly crafted fleetness and aesthetic gracefulness to merit being referred to as a romp.


The only visual flaws to speak of are very rare bright flashes that intrude and overwhelm the image, a distortion that is endemic to older coloring processes (Eastmancolor, in this case) and thus probably not to be blamed on Kino's transfer. In any case, they go by almost subliminally, and I would estimate that there are no more than three or four throughout, with each one lasting for less than a second. Otherwise, this AVC/MPEG-4 encoded, 1080-mastered, anamorphic-widescreen, 1.85:1 aspect-ratio transfer is brilliant, with a vibrancy of color (all-important for a film like Casanova '70) and retention of celluloid-like texture and contrast that make it look like a brand-new print being run for the very first time.


There are no problems whatsoever with the disc's DTS mono 1.0 soundtrack (in Italian--dubbed/post-synched as standard for Italian films of the era, which rarely used direct sound--with optional English subtitles), which delivers that zany score and Mastroianni's every exasperated "Ma-ma mia!" at the limit of clarity possible for available sound recording capabilities in 1965. (The audio was actually virtually free, to my ear, of any of the distortion or tinniness that sometimes plagues older sound recording technologies.)


Extras are limited to the appealingly fizzy, eye-popping, rhythmically edited original theatrical trailer (along with those for other Carlo Ponti presentations of the era also released for home viewing by Kino, e.g., Yesterday, Today, and Tomorrow) and a slideshow/stills gallery containing around 20 lusciously colorful snapshots from the film.


A fizzy Italian soda that almost never goes flat, Casanova '70 is perhaps the ultimate reminder--if you need one--that Marcello Mastroianni was once an international-playboy sex symbol whose charm alone could carry a movie. Not that this one only has Mastroianni going for it; director Mario Monicelli and team are able to maintain an almost nonstop light touch while still giving us enough very inventive camerawork and editing--always in the service of the film's fun, of course--to keep things interesting on the aesthetic level, beyond the plentiful gags. Its look and attitudes are inarguably very dated, but that's all part of Casanova '70's appeal. (Wasn't the entire Austin Powers franchise predicated mostly on such harmlessly amusing retrogression?) If this is a film that's firmly stuck in the past, it's well worth joining it there for a while just to soak up some of its naively sexy, effervescent, purely and refreshingly comic-escapist atmosphere. Recommended.