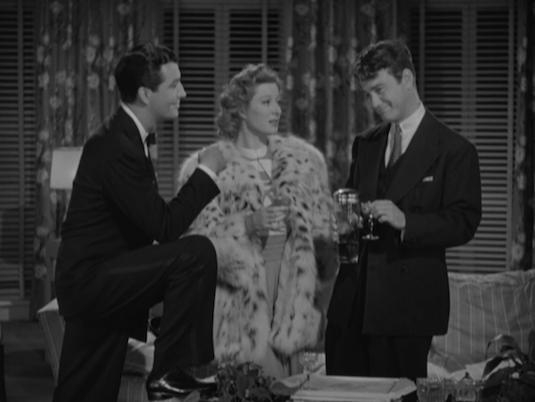 Rushed into production to capitalize on the new popularity of Goodbye, Mr. Chips's leading lady, Greer Garson, the 1939 flick Remember? is a frothy romantic comedy that amuses and delights pretty much until the moment that the film introduces (and bungles) the high-concept twist alluded to in its title. Director Norman Z. McLeod, who directed two classic-era Marx brothers flicks, as well as the first two Topper movies, keeps Remember? light and lively, even as the script he co-wrote with humorist Corey Ford goes careening out of control.

Admittedly, the flick locates itself in tough narrative territory from the jump. In the first scene, we're introduced to happy-go-lucky office worker Sky Ames (Lew Ayres, at his most Jack Lemmon-ish), excited to introduce his best buddy, overworked ad-man Jeff Holland (Robert Taylor), to the woman he met on vacation and has asked to marry him. Problem is, once Jeff sets eyes upon the lovely Linda (Garson), he immediately starts wooing her himself. Now, it looks like we have ourselves a humdinger of romantic triangle, except for one strange development: Sky Ames is not the main character of this film. Jeff Holland is. The filmmakers immediately ask that we take the side of a guy who would steal his best friend's fiancee away, and that we don't too harshly judge a woman who would whimsically change bridegrooms on the way to the altar.

To the movie's credit, it performs some of its due diligence by giving Taylor and Garson a number of warm and funny bonding scenes that help to win viewers over. A horseback riding scene, with Jeff the overwhelmed novice, culminates in the two romantic leads soaked in a water hazard. The scene where they then repair to a nearby barn and help each other out of their wet clothes is a foregone conclusion. After some hand-wringing over whether or not what they are doing is right, the pair decide to elope halfway through the movie.

The strangest decision by the screenwriters once Jeff and Linda get married is to have Sky step out of their way with little argument. We don't even get to see Sky have the realization that Jeff and Linda are a better match. This missing step becomes more glaring as the plot continues, and Jeff's workaholic habits make him seem like a bad, neglectful husband. If Sky hadn't neutered himself halfway through the flick, there could be another interesting tension here, with Sky momentarily looking like the choice Linda should have stuck with.

Instead, the movie has Sky so inexplicably on the couple's side that, in the plot twist that sets up the film's concluding twenty minutes, he takes an experimental amnesia drug from his company and doses Jeff and Linda's drinks with it. Sky wants them to forget the bad times, but they end up forgetting the past six months entirely. It seems like the perfect moment for Sky to reclaim Linda's affection, but the film completely glosses over this possibility. Instead, we see Jeff and Linda play out their original courtship in much the same fashion -- including sneaking around on Sky -- and the intended laughs are supposed to come from confused onlookers reacting with variations of "What do you mean you just met? You two are married and you hate each other!"

Considering the quality of the film's dialogue and its handful of big visual jokes, it's a real shame that the plot is such a letdown. One can only conjecture about why this is. Maybe the film was so rushed into production that the writers had no time for another draft or two that would have better integrated their romantic triangle idea with their proto-Eternal Sunshine amnesia idea. Maybe the studio had the writers scrub out the darker aspects of the love story and put all their eggs in the amnesia-makes-everyone-happy-in-the-end basket. I guess we'll never know.

Taken on their own, the performances are uniformly enjoyable. Garson sometimes looks a little lost, but this kind of plot will do that to you. Fans of character actors from this era will be pleased to spot Billie Burke (Glinda the Good Witch) as Linda's dotty mother, Sig Ruman as the inventor of the amnesia drug, Henry Travers as the small-town judge who marries Jeff and Linda -- twice, and Paul Hurst as a befuddled traffic cop. 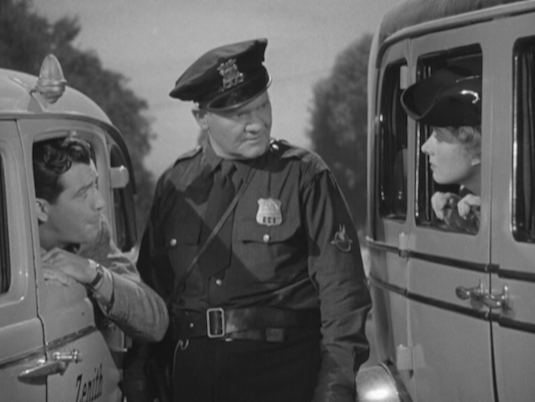 The DVD
Remember? has been released as part of the Warner Archive Collection of manufactured-on-demand (MOD) DVD-Rs.

The Video:
Despite some reoccurring dirt and specks, this standard 1.33:1 presentation is quite strong for a Warner Archive release. No major digital compression noise. Detail is good for an SD release, and there's a nuanced grayscale range.

The Audio:
No major complaints about the Dolby 2.0 mono audio. Obviously, the soundstage is narrow, but the fidelity is good for a film this age. No subtitles.

Special Features:
Just the trailer, which oddly includes a joke specific to the amnesiac portion of the film without explaining the amnesia premise at all.

Final Thoughts:
Remember? is an enjoyable romantic comedy, despite its high-concept premise rather than because of it. The whole is sadly not greater than the sum of its parts, but scene-by-scene, this movie is a sweet and snappy delight. For that reason, it comes Recommended. 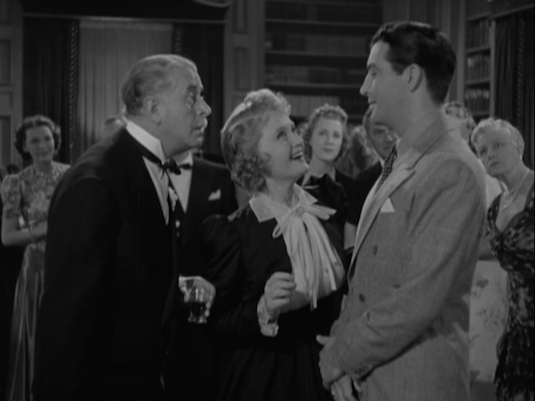