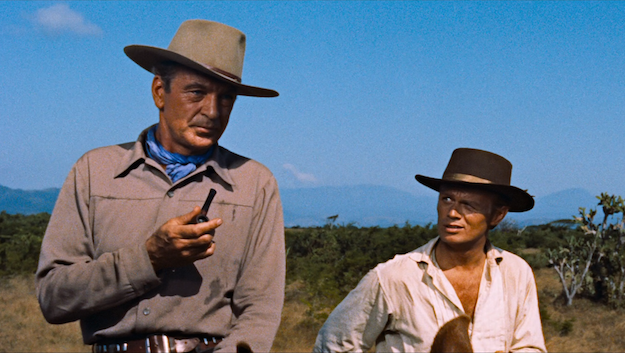 Director Henry Hathaway mounts an attractive early Cinemascope production with this 1954 western, Garden of Evil. Featuring gorgeous Mexican locations (sometimes augmented by excellent matte paintings), the film is satisfying as spectacle even as its story gradually fizzles out.

Gary Cooper and Richard Widmark star as gold hunters headed to California... that is, until their ship is waylaid in the Mexican village of Puerto Miguel. Cooper is too much of a straight arrow to be convincing as your standard mercenary, so it comes as little surprise to find out later that his character, Hooker, is an ex-sheriff. Widmark, meanwhile, invests his "gambler poet," Fiske, with a familiar mix of tough-guy bravado and mischievous slyness. With their transport out of commission indefinitely, Hooker and Fiske figure they are in for the long haul in Puerto Miguel. Within seconds, Fiske already has his head turned by a singing cantina girl (Rita Moreno, in a sadly brief role).

Everything changes, however, once the beautiful and distraught Leah Fuller (Susan Hayward) barges into the cantina, asking for men to save her husband from a gold-mine that has caved in. Most of the patrons take a hard pass on the job, but the cantina girl's boyfriend, Vicente (Victor Manuel Mendoza), offers to help. Whether spurred by the reward money, or the woman, or the prospect of sneaking into that gold mine, Hooker and Fiske take the job too. Rounding out the party is a hot-head named Daly, played by Cameron Mitchell.

With its five strangers brought together by circumstance and a shared quest for gold, Garden of Evil makes it seem like we are being led into Treasure of the Sierra Madre territory. And indeed, tensions do gradually increase as the journey continues. Vicente marks the trail to the gold mine, so he will know how to get back, and Leah destroys his markers when he's not looking. Daly makes a play for Leah, and Hooker punches him backward into a small campfire.

But while Garden of Evil nudges its characters toward greedy paranoia, the film seems to lose interest in this thematic thread once the party gets to the mine. It turns out that Leah's husband, John (Hugh Marlowe), isn't so happy to be saved. He's mad at Leah for getting him into this mess and certain that a roving band of Apaches are bound to wipe them all out shortly anyway. After this revelation, the second half of the film largely involves the party trying to work out the logistics of outrunning the Apaches with a wounded man in tow.

It's not a bad concept for a Western adventure, but the film's dramatic momentum lurches and stalls so often that it's hard to get too wrapped up in the story. It also doesn't help that Susan Hayward often seems out-of-sync with her character, and she's arguably the most important one. After all, it's Leah's subtle seductiveness that is supposed to spur on all five men throughout the running time of the film. Hayward is beautiful and able to turn on some toughness and charm sporadically here, but too often she is just vaguely flat. Paired with Cooper's low-energy drawl, their characters seem best suited toward taking a nap together, rather than sleeping together.

Still, there are enough exciting scenes that fans of the era and the genre might be interested to check this out. In addition to aforementioned campfire fistfight, the film also effectively ratchets up the tension during a cliffside shoot-out with the Apaches that is a beautifully realized mix of location shooting, miniatures, and matte paintings.

Film music legend Bernard Herrmann contributes a rousing score that, along with the camerawork by Oscar winner Milton Krasner and Jorge Stahl Jr., is the most effective aspect of the picture.

The Blu-ray
Garden of Evil has been released in a limited edition of 3000 copies. The disc is packaged with a booklet containing a liner notes essay by Twilight Time's Julie Kirgo.

The Video:
Wowza. Shot in Cinemascope and Technicolor, Garden of Evil really pops in this AVC-encoded 1080p 2.55:1 transfer. The film image has been scrubbed of almost all dirt and damage, but maintains a satisfyingly filmic look. The colors are vivid and intensely saturated. Apart from some dupe-y-looking opticals and dissolves, the image is typically razor-sharp and offers plenty of depth to complement the extra-wide screen.

The Audio:
There is an embarrassment of riches in the audio department, with three different possible mixes: a new DTS-HD MA 5.1 surround mix, a DTS-HD MA 4.0 mix that presumably replicates the original 4-track stereo, and a DTS-HD MA 2.0 stereo mixdown. All of the tracks are satisfying in different ways, although the 2.0 mix sacrifices the more pleasingly spacious ambience of the other mixes for a blunter, more forceful sound. Bernard Herrmann's memorable score is unsurprisingly given the best support in the new 5.1 remix. The disc offers one subtitle option: English SDH.

Special Features:
These all seem to have been ported over from the 2008 Fox Western Classics box set, and are all presented in SD.

Final Thoughts:
Garden of Evil is a solid Western drama that loses its sense of thematic direction somewhere along the way. The uneasy camaraderie of the male cast members is more convincing than the muted romance set up between Gary Cooper and Susan Hayward. But, even if the story leaves a little something to be desired, this early Cinemascope production, with 4-Track Stereo, delivers in the eye- and ear-candy departments. Recommended.