Alan Parker once said that he decided to helm The Commitments because the project combined the two things he felt most comfortable with as a director: Staging music and working with young people. Parker is a master in visualizing music in an exciting and daring way (Pink Floyd The Wall), and he has a unique knack for extracting natural and seemingly effortless performances from young actors (Birdy). Hell, sometimes he does both at the same time, as witnessed in Fame and Bugsy Malone. 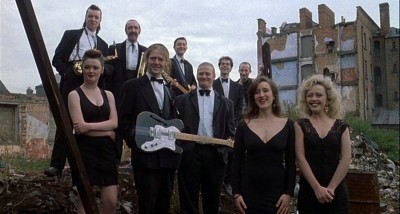 Therefore, it shouldn't be much of a surprise when a delightful and downright hilarious story about a ragtag group of Dubliners attempting to bring American soul music to their depressed city, only to end up with an equally dysfunctional and talented band called The Commitments, is still as entertaining and memorable a quarter century after its release. In many ways, The Commitments is ground zero when it comes to a sub-genre of dramedies about working class Brits following their artistic passion in quirky and inspirational ways (Billy Elliot, Kinky Boots, Full Monty), while still being its best example.

The story's fairly simple, and the screenplay, adapted from Roddy Doyle's novel, covers for its lack of a traditional structure and character arcs, as well as a light touch when it comes to a build-up of second act conflict, with relatable characters and a clear goal for them to passionately follow. The Commitments tells the organically humorous and inspiring tale of a band manager named Jimmy Rabbitte (Robert Arkins) trying to keep his immensely talented but volatile soul band from ripping itself apart, at least until they land a recording deal. During one of the most quotable monologues in British film history, Rabitte tells his band that they should play American soul, a type of music usually associated with black people, since he considers the Irish to be the blacks of Europe, and Dubliners to be the blacks of the Irish.

As good as the band is when it comes to finding an Irish take on soul, as evidenced by the film's many enthralling musical set pieces, the various ego trips, back stabbings, and sexual relationship issues within the band eventually reach a boiling point, resulting in an appropriately bittersweet climax. The performances by the then-unknown ensemble cast are all natural and breezy, resulting in a realistic depiction of early 90s life in Dublin, a depiction also heavily helped by Parker's dedication to not hold back from showing the monochromatic and desolate parts of that life. It's a film that stresses the fact that unbridled joy and passion can be found in even the most economically depressed places.

Almost all of the characters are memorable in their own way. Even if they don't all get a clear arc, a feat that would have been very hard to pull of during a two-hour runtime considering the largeness of the ensemble cast. However, one character sticks out the most amongst them, and that's the Jake and Elwood Blues of The Commitments, an eccentric trumpet player named Joey "The Lips" Fagan (Johnny Murphy) who's convinced that The Lord commanded him to bring soul to Ireland. There are two more films that followed The Commitments, also adapted from Roddy Doyle's novels, that focus on the continuing adventures of the Rabbitte family (The Snapper and The Van). I would have loved to see a spin-off film that focuses on Joey and his weirdly sullen and quiet mother. 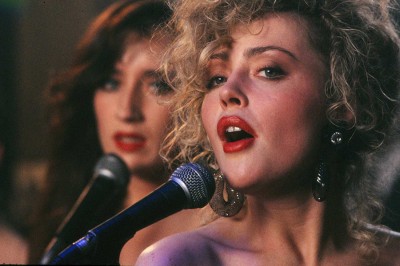 The 1080p presentation is by far the best home video version you'll find of this modern classic. Parker's grayscale representation of Ireland is kept intact, there isn't any noticeable video noise, and the transfer finds a nice balance between a digital HD look and film look with a healthy amount of grain.

For fans of the film, I'm guessing that this will be aspect of the A/V presentation that matters the most. In that sense, there's nothing to be afraid of, since the DTS-HD 5.1 track brings the house down with its power and clarity during the film's many musical performances. The impressive surround presence during the musical scenes pretty much puts the audience inside the venues where The Commitments perform.

25 Years Later: This is the only new extra that wasn't ported over from the previous DVD release. It's a 20-minute featurette that catches up with Alan Parker and a trio of the film's cast to talk about the shooting experience. It doesn't really add anything different than the information we get from the other extras, but it's fun to catch up with these people.

The Making of Alan Parker's Film: A 23-minute featurette that was put together during the making of the film.

Looking Back: A 50-minute doc that catches up with the cast and crew ten years after the production.

Making of Featurette: An 8-minute EPK made during the film's production.

Treat Her Right Music Video: With an introduction from Alan Parker and Robert Arkins.

Commentary by Alan Parker: The commentary, recorded for the film's original DVD release, has many gaps, but provides a lot of information about the production. However, a lot of this information can also be found within the multitude of featurettes in the disc.

We also get Set Photos, Trailers, and a Booklet with an essay by Alan Parker. The inside of the cover also contains a clever addition: A list of Dublin slang translated to common English.

With an excellent A/V presentation and cool new extras, the new Blu-ray edition of The Commitments is a no-brainer for fans of the film, and a great way for newcomers to experience this wonderful little gem that seems to get better with age.