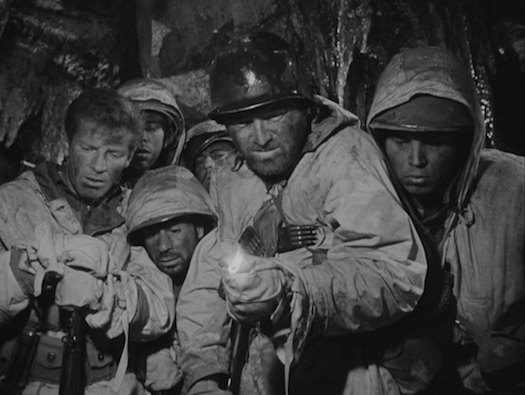 Samuel Fuller's contemporaneous Korean War drama Fixed Bayonets! (his second of 1951, after The Steel Helmet) is both an underrated, underseen pulp gem and one of the greatest combat films ever made. Reteaming with the gruffly magnetic Gene Evans from The Steel Helmet, writer-director Fuller conjures a convincingly lived-in version of war that envisions it less as hell -- or as a patriotic duty -- than as a job to be done.

"Killing's a business," Evans's Sgt. Rock growls at one point to a trigger-unhappy corporal played by Richard Basehart, as a means to get him "over the hump" of shooting his first man. In a modern film that line might drip with cynicism, but in Fuller's world, it underlines the notion that you just gotta do your work and do it well, especially when your platoon is depending on you.

The platoon in question has been stuck with the least cushy job you can imagine: a rear-guard action. While the rest of their division retreats and regroups, an unlucky band of 48 brothers have to keep up the ruse that a whole regiment is backing them up and are ready to press forward, rather than pulling back. It's a suicide mission, essentially, but Fuller ain't no existentialist, so his characters behave like they might just make it out of this scrap alive.

Fuller doesn't waste too much time giving his dogfaces elaborate backstories or sweethearts back home to worry about. Some of the fellas have a few standout traits -- one is a heavily accented Italian, one is a full-blooded Cherokee, one is an erudite know-it-all who gets dubbed "Mr. Belvedere" -- but the most important thing about these men is the way they work as a unit. In fact, most of the cast -- including a briefly glimpsed James Dean in his first film role -- don't even receive billing in the credits.

The dilemma of Basehart's Corporal Denno is the spine of the film. Denno has the know-how and the guts to be an officer, but he blanches at the idea of having to make a life-or-death decision. Sgt. Rock teases him about being fourth in the chain of command, by pointing out that three men can get knocked off as quickly as you can snap your fingers. Once the first commanding officer bites the dust during an attack from the Chinese, it becomes clear that Fuller is going to give Denno his moment to put up or shut up eventually.

But Fuller is too deft a storyteller to turn the film into a macabre And Then There Were None-style waiting game. He and cinematographer Lucien Ballard (The Wild Bunch, The Killing) keep viewers rapt by staging tense, fluid action scenes on a clearly limited budget (their "exterior" locations are almost entirely shot on a soundstage). And Fuller is always threading his story throughout his setpieces; the finest example of this occurs when Denno decides to cross an unmapped mine field to rescue the injured platoon leader. It's an enjoyably tense sequence, and one that clearly demonstrates Denno's potential for bravery while underlining his main flaw. He'd rather die saving a man than end up with the command.

This notion of what defines cowardice or bravery in war obviously captured Fuller's imagination, as he would revisit the theme again, notably in the Mark Hamill storyline of 1980's The Big Red One. Hamill's character arc in that film is arguably a sad one, with his character forced into action in the face of war atrocities, and Fuller seems slightly ambivalent about Corporal Denno's fate in this film as well. It's not a major spoiler to say that Denno taps into his strategic ability to help out his platoon in a big showdown with Communist troops, but what happens afterward seems slightly anti-climactic. There are no celebrations or accolades, no commendations or ticker-tape parades. There's just a slog through a river and the promise of more battles to be fought. Killing's a business, after all. 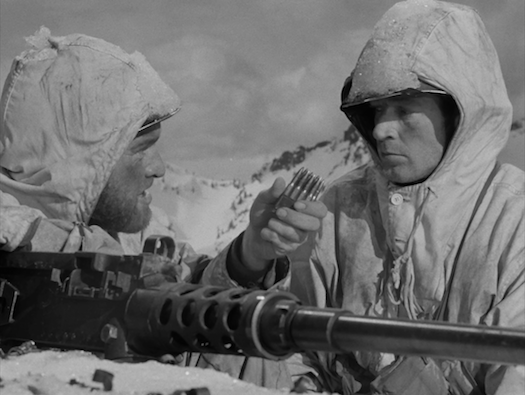 The Video:
Touted as a 4K restoration on the packaging, this AVC-encoded 1080p 1.33:1 transfer is presumably sourced from the same master as the Region B disc released by Masters of Cinema a few months back. I have not seen the MOC disc, but I know theirs was dual-layered with a generous bitrate, while Kino sticks with a single-layer version. As such, there are a few isolated moments of noticeable compression noise, especially during the climactic battle, and heavy banding and crushing during the final night-time scene. But oddly enough, these flaws are pretty rare, as the majority of the flick looks excellent, with legit 4K clarity, well-resolved film grain, and nuanced contrast. No dirt or damage. If you can't spring for an all-region player, you shouldn't be too disappointed with this Region A version.

The Audio:
A nice restoration job on the DTS-HD MA 2.0 mono audio, with no noticeable flaws or damage. Dialogue is clear, and the gunfire and explosions have a satisfying oomph for a 65-year-old flick. No subtitles, sadly.

- Historian Schlesinger does an excellent job of identifying the unbilled cast members and filling in their bios while discussing the production, as well as sharing his personal memories of Fuller. Fuller's widow and daughter also provide plenty of good behind-the-scenes tidbits, making for a lively, informative track. One story I particularly liked involves a mishap sprung from Fuller's habit of firing a gun on-set instead of calling "action."

Final Thoughts:
Sam Fuller was a born storyteller, and Fixed Bayonets! is one of his most satisfying stories. Colored by his own combat experiences, the film crackles with vitality and authenticity and is brilliantly headlined by Gene Evans and Richard Basehart. Highly Recommended. 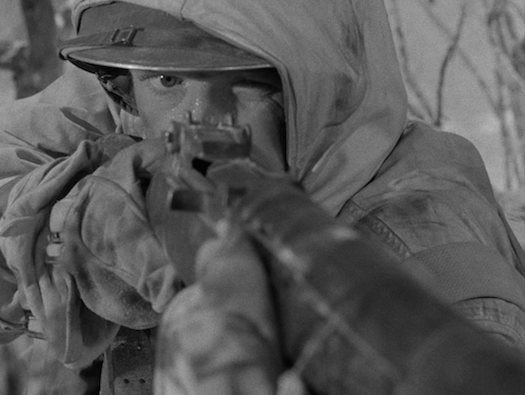