Storks, the most pleasant surprise of 2016, manages to create one of the funniest and most thoroughly satisfying animated features of the year by successfully mixing the irreverent and manic physicality of old school Looney Toones cartoons with a Pixar-level natural emotional connection to the characters. It's hard to sell Storks as the witty, smart, audacious and endlessly creative piece of fun that it is, since the film's bland marketing continues to make it look like yet another cookie cutter piece of bubble gum colored distraction for the little ones to drool over so that the parents can enjoy their precious two hours of peace. Yet what we actually get is one of the best comedies of the year, animated or not, that should appeal to the entire family. 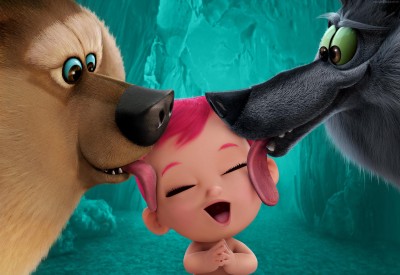 Storks takes place in a world where birds actually deliver babies to families. The film makes it clear that conception through good old-fashioned sex also exists, implying that the storks service is available for those who might not want to go through nine oh-so-pleasant months of labor. At least that's what the storks used to do, until the ugly claws of free market capitalism motivated them to become delivery birds for cornerstore.com, an Amazon-style massive online shopping site with a giant warehouse balanced on top of a mountain.

Junior (Andy Samberg) is one of the top delivery birds in the company. He's a cocky yet lovable idiot, basically an animated stork version of Samberg's character from Brooklyn Nine-Nine. He's finally offered the big boss position at the company, and all he has to do to secure the job is to fire Tulip (Katie Crown), a bubbly and overeager young inventor who got stuck working at the company after a stork lost her delivery address. Tulip's many crazy inventions are causing a lot of stress at the company, but Junior doesn't have it in him to fire her, so he hides her in the now-isolated letters department.

However, he doesn't count on an adventurous little boy named Nate (Anton Starkman), who sends a letter asking for a baby brother after failing to receive any attention from his workaholic parents (Jennifer Aniston and Ty Burrell). Through some hilarious hijinks, the letter is sent to the baby-making machine, leaving Junior and Tulip to deliver the baby before Hunter finds out about it. This leads the odd couple on a treacherous and incredibly fun journey that involves an ass-kissing bro wannabe pigeon (Perhaps the funniest character of the year) and an absurdly hive-minded pack of wolves (Keegan-Michael Key and Jordan Peele) on their tail.

Writer director Nicholas Stoller is an uncharacteristic name to put together a piece of family entertainment, since he's mainly known for his raunchy hard-R sex comedies like Neighbors and Forgetting Sarah Marshall. Yet Stoller turns out to be a fresh new voice in this market as he succinctly transfers the manic energy and irreverent humor of his R-rated material into a package that's easily digestible for the whole family, while not compromising on some absurd elements that take chances with the project's unique brand of humor (The downright supernatural abilities of the wolf pack is a good example of this). The blend of fast-paced screwball dialogue and snappy action set-pieces that reminds us of the best Looney Tunes had to offer come together perfectly with the third act's shift into a more Pixar-level attention to character and emotional pathos. As crazy and off-the-wall as Storks gets, perfectly suited for the otherwise overused "cartoon" moniker, Stoller never takes his eye off the character development that's necessary to land the film's tear jerking climax. 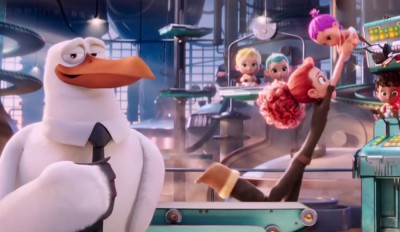 The 1080p transfer perfectly captures Stork's bright and colorful look. A lot of the film takes place in sky and snow locations, where the bright white and blue backdrop clashes beautifully with the colorful characters in the foreground. The transfer represents this blend in as much of a crisp and clear fashion possible, without any color bleeding or other video noise issues.

Storks works as an action/comedy first, and an animated family feature second. Therefore, a strong, surround-heavy sound mix is a welcome addition to the film's home video experience. The DTS-HD 5.1 track gives the film's many creative action set-pieces the vitality they need, while taking full advantage of subtle sound mixing during quiet parts (An especially inventive quiet fight scene is accentuated greatly by the restrained mix).

Guide to Your New Baby: A funny "instructional" video where the characters from the film tell you how to get ready for your next baby delivery.

The Master: A hilarious Lego short that preceded the feature in theaters.

Music Video: A forgettable video for "Kiss The Sky" by Jason Derulo.

Audio Commentary: Stoller, along with the co-director and the producers, deliver a fun commentary on the making of the film.

Outtakes: These reminded me of the "outtakes" Pixar used to create during the late 90s, with characters "flubbing their lines". A short but funny addition.

Deleted Scenes: A bunch of deleted material, some funny stuff but nothing too vital to the story.

Storks is a daring, inventive, and downright hilarious addition by Warner Bros into a field dominated by Pixar and lately, Illumination. The pitch-perfect Blu-ray presentation makes it a valuable addition for animation fans.