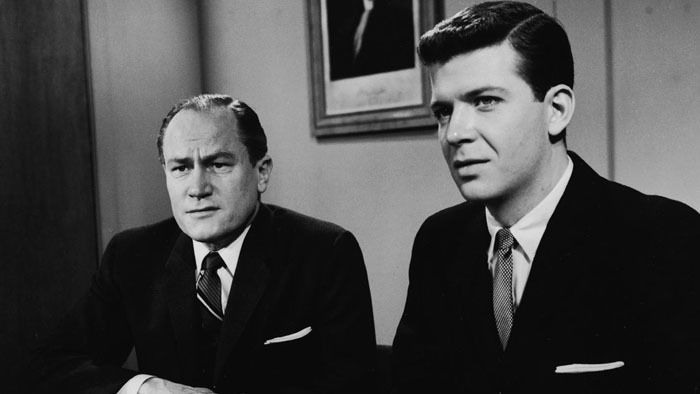 Long out of circulation, the legendary legal series The Defenders makes its belated arrival on DVD with a new Season One set from Shout! Factory. Starring E.G. Marshall and Robert Reed as a father-son team of defense attorneys, the show displays the intelligence and idealism of the best early television drama, even though it hit the airwaves in 1961 (technically after TV's original Golden Age).

Created by 12 Angry Men writer Reginald Rose, The Defenders is not a mystery show in the Perry Mason/Matlock mold (although season one features a few different episodes where one of the hero attorneys gets a witness on the stand to confess that they, in fact, are the real perpetrator of the crime in question). Instead, the show uses its cases to explore the many grey areas that exist between common morality and what the law demands. Lawrence Preston (Marshall) is a well-respected New York lawyer, whose years of experience give him an unassailable authority -- although the show makes certain that he is still fallible. His son, Ken Preston (Reed), is whip-smart but more emotional and somewhat impetuous compared to his father. Their cases lead them to tackle hot button issues, such as abortion, pedophilia, drug addiction, mercy killing, and mental illness. Because of television standards at the time, sometimes the writers are required to talk around these topics, but the boldness of the subject matter is still quite bracing.

The show's point-of-view is unrepentantly liberal, which is what makes it feel simultaneously fresh and dated now. Many of the show's storylines reflect debates that continue to go on today, but from a relatively "un-woke" '60s perspective. The most glaring example of the disconnect between how enlightened The Defenders hopes to be and how enlightened it truly is, comes in the show's first episode, where a baby with Down's syndrome is consistently referred to as a "mongoloid idiot" by a number of well-meaning characters. Of course, progress has to start somewhere, and fortunately The Defenders is concerned with being a smart, entertaining show (at least a bit) more than it is concerned with preaching an agenda.

The episode for which The Defenders is currently best known is the one concerning abortion, "The Benefactor," because of its incorporation into the second season of Mad Men. The show lost some sponsors because of the subject matter, but "The Benefactor" was well-received by viewers and critics. Viewed now, the episode is a little hokey and heavy on earnest speeches, but it's also dramatically tough and still packs an emotional wallop. A kindly old doctor (Robert Simon) is arrested for performing illegal abortions, and though he knows he technically broke the law, he hopes that the Prestons will help spread the message that the law is unjust. The doctor has a personal reason for this point-of-view, which he does not freely share with his lawyers, but Lawrence discovers it and uses it to strengthen the doctor's case. It's not a spoiler to reveal that the doctor doesn't win the legal victory, but the show makes its case that he may have made a step toward a moral one.

In "The Iron Man," the show flips this dynamic, with the Prestons winning a case for a crypto-Nazi law student that they don't like or respect, because even he deserves fair representation in court. In "The Attack," the Prestons defend a cop who killed the man he thinks molested his five-year-old daughter, doing their job while quietly hoping that the jury's natural sympathy for a grief-stricken father will not override the need for fairness and justice.

Marshall and Reed anchor the show beautifully, with their mild generation-gap variations on the straight-arrow, square-jawed American Truth Seeker. In a few early episodes, the show tries to give Reed's character a romantic life, with Joan Hackett as his patient girlfriend, but (arguably, for the best) her story gets pushed aside as the series eventually becomes fully focused on the Prestons at work.

If you've never seen The Defenders -- and chances are, you haven't -- seize the opportunity to check it out now. It's a good one. 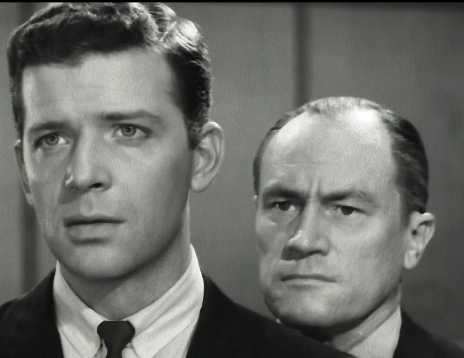 The DVD
The 32 episodes of The Defenders: Season One are presented on 8 DVDs, with another disc for special features. The discs are housed on back-to-back hubs in a single wide, sturdy keepcase.

The Video & Audio:
Although you will see an occasional disclaimer about certain episodes being presented from "the best available elements," none of the included shows are distractingly damaged or hard to watch. Contrast levels in the black-and-white standard 1.33:1 video fluctuate, sometimes giving the image a washed-out look. Detail is fair. The video encode is a little noisy now and again, but compression is not a major issue. There tends to be surface hiss and crackle on the Dolby 2.0 mono audio, plus clicks and pops, but none of it obscures the dialogue, which is consistently easy to make out. That's good, because the disc offers no subtitles or captions.

(1:43:02) - Previously released on DVD a decade ago, this is Reginald Rose's original 1957 teleplay that inspired the series. Ralph Bellamy and William Shatner play the Prestons, Steve McQueen is the accused, and Martin Balsam is the showboating prosecution. In a nutshell: McQueen is a hot-headed jerk up for murder, Bellamy assumes he's guilty and decides to do the bare minimum in defending him, but sonny boy Shatner feels it in his gut that McQueen's innocent and tries to move his father to prove it. The story is effective and entertaining, much like the show it spawned.


Final Thoughts:
One of the best legal dramas ever broadcast finally arrives on DVD. New viewers might be struck by how the show is both boldly progressive and oddly old-fashioned at the exact same time, but the strength of the writing, the directing, and the performances make it irresistible even so. Highly Recommended. 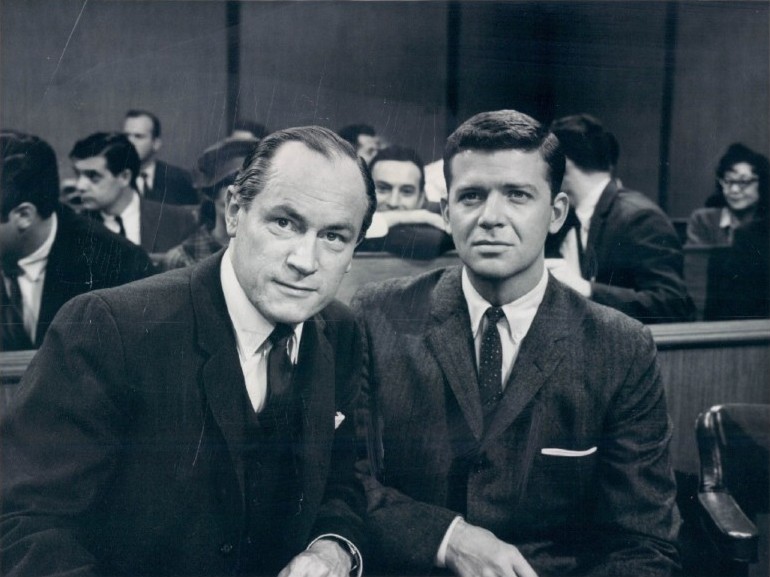