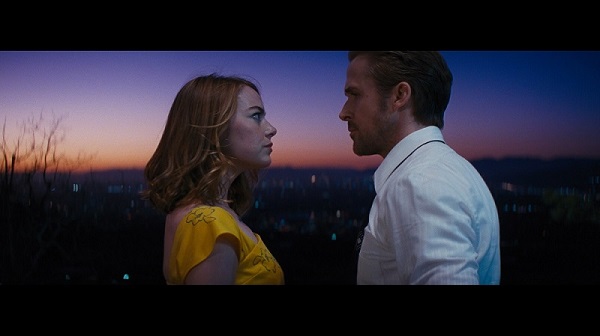 I'll confess to having mixed feelings the first time I saw La La Land in theaters. I couldn't understand why a director like Damien Chazelle would make an attempt to revive the dying (if not already dead at the time) movie musical genre by giving audiences a movie that has such a downer ending (which I won't spoil beyond that in this review). I still remember the groans from people walking out of the theater that day with one couples' comment burned into my brain: "Well, that was a huge waste of time."

Now available in the 4K Ultra HD format (as well as Blu-ray, of course) on home video, I was glad I gave La La Land a second chance. I was now able to watch the film for what it is, rather than what I hoped it might be...and this time around, I enjoyed it a whole lot more...even the ending, which gives the movie some "staying power". Had La La Land given us a more typical ending, it may have raked in more bucks at the box office, but also probably would have been pretty much forgotten a few years down the road. The fact that it's not necessarily a "feel good" movie...at least not at the end...assures that La La Land will still be talked about for years to come and I think as time goes by, more and more will appreciate the movie because of that.

Despite being nominated for an Oscar as Best Picture (and having victory snatched from its hands in one of the most embarrassing snafus in Academy Award history) and winning six other categories, including Best Actress and Best Director, La La Land isn't without a few missteps. While the big opening number on an Los Angeles freeway signifies to viewers that they're about to watch a lavish musical, the number doesn't really fit tonally with the rest of the movie, nor does it really involve the two main characters of the film, although it is the first time they cross paths.

La La Land stars Emma Stone and Ryan Gosling as Mia and Sebastian, respectfully, two young people who have come to L.A. to pursue their dreams, and are discovering that reaching for them and actually obtaining them can be very far apart. Mia is a wannabe actress, while Sebastian is a piano player and jazz lover who dreams of one day opening his own club. She fails at audition after audition (working as a barista on the Warner Bros. lot to make ends meet), while he tries to pay the bills (the ones he's not ignoring) by playing the keys at a local restaurant...only to get fired when he deviates from the standard set list to deviate into jazz. While most couples in movies have a "meet cute" moment (as the late Roger Ebert termed it), Mia and Sebastian have a few "meet ugly" encounters before they finally realize they're falling for one another.

The most interesting thing about La La Land is that, despite some elaborate set pieces and beautiful cinematography (by Linus Sandgren, who won the Oscar for his work here), the film actually gets more intimate as it moves along. The best moments in the movie actually come during the second half of the film, when things start coming apart between Mia and Sebastian, and my favorite part of La La Land isn't one of the big numbers, but rather Emma Stone's solo performance of "The Fools Who Dream", during which the camera just stays on her for the entire song, with no fancy visuals or dancing involved. It's by far the best song in the movie (and was nominated for an Oscar, but lost to La La Land's other featured song, "City of Stars") and the one I'll always remember first when thinking of this film.

La La Land isn't a perfect movie, but it's a darn good one and really unlike anything else we saw at the box office in 2016. If you saw it in theaters and had the same reaction I did the first time around, I encourage you to give it a second chance now that it's on home video. Like all well-made films, this one holds up to the "rewatchablity" factor and deserves a spot in any serious collector's home library.

La La Land dances its way onto 4K with this Ultra HD/Blu-ray/Digital HD combo pack. The 50GB Blu-ray and Ultra HD discs come housed inside a black Elite keepcase, along with an insert containing a code for one's choice of either an UltraViolet or iTunes copy of the movie. A slipcover with artwork matching that of the keepcase's slick slides overtop.

There are no front-loaded trailers on the Ultra HD disc; however, the Blu-ray is front-loaded with trailers for the 30th Anniversary edition of Dirty Dancing and Lion, along with an ad for the Tribeca Shortlist movie subscription service. The main menu is an animated montage that includes some footage from the movie, with menu selections horizontally across the bottom of the screen.

The Blu-ray is in this release is Region A locked; however, like all 4K discs, the Ultra HD has no region coding.

La La Land was shot on 35mm film using the Panaflex Millennium XL2 camera. The film is presented here in its original theatrical "CinemaScope" aspect ratio of 2.55:1. The 4K Ultra HD transfer is taken from a 2K digital intermediate of the movie, so while it's not "true" 4K, only the most discerning eyes will be able to tell the difference, as the image here looks great.

I was looking forward to seeing how the HDR capabilities of Ultra 4K would show off this film's color palette, and the 4K image does not disappoint, providing viewers with some wonderful deep reds, bright yellows, and brilliant blues. While the Blu-ray that is included in this release certainly looks nice in its own right, it simply can't reproduce the depth of color that the 4K disc does, giving this Ultra HD a big advantage over the standard Blu-ray for those with 4K set-ups.

Also of note here are the inky deep black levels, which arrive without a hint of noise leaking through. Facial features are both detailed and consistent throughout, and I didn't notice any glaring instances of banding, aliasing, or other frequently-seen hi-def glitches. While I'm wary to give La La Land a reference-quality score due to the fact that it's taken from a 2K digital intermediate, I will say as far as up-converted titles go in my Ultra HD collection, this movie is right at the top in terms of picture quality. Fans of this film are going to be very happy with what they get here.

First of all, it's noteworthy to point out (at least for those who may not yet have 4K capabilities) that both the 4K and Blu-ray discs have exactly the same audio options...meaning that, yes, the Blu-ray also contains the Dolby Atmos track for those with Atmos set-ups. For those of us who haven't been blessed with an Atmos home theater (including this reviewer), the track's audio down-converts into 7.1 Dolby TrueHD. Audio is important to every movie, of course, but none more than a movie like La La Land, and I'm happy to report they've done an excellent job with the presentation here, including making sure that every big musical number (at least the ones that are supposed to be) are fully immersive experiences, with great use of the surrounds and the kind of crispness and clarity one hopes for in an aural presentation.

Dialogue, while primarily front and center, is also crisp and clear, and I didn't detect any noticeable glitches in the track (there's a bit of bad ADR dubbing in one scene where Mia and Sebastian are on the Warner Bros. lot, but I can confirm that was in the theatrical release, because it jumped out at me then as well). Everything seems properly mixed as well, so ambient noises never drown out the spoken word.

In addition to the Atmos track, 5.1 Dolby Digital tracks in both Spanish and French are included, as is an English 2.0 Dolby Digital track that is "Optimized for Late Night Listening". A English Descriptive Audio track is also an option, as are subtitles in English SDH and Spanish. 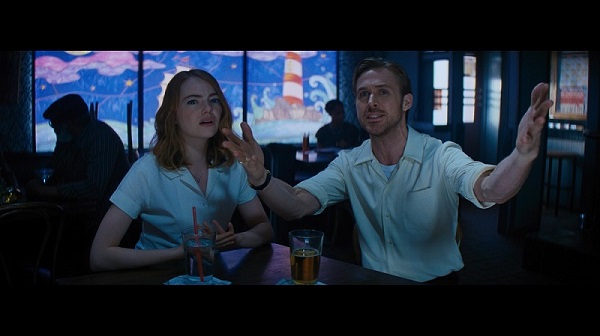 Note: In what I believe may be an Ultra HD first, all of the bonus materials that are contained on the Blu-ray disc are also available on the 4K disc, meaning that...also for the first time...the accompanying Blu-ray will have little use for those with a 4K home theater (much in the same way DVDs have little use when provided in combo packs with Blu-rays). This is great to see, and let's hope it starts a trend that will eventually lead to standalone 4K releases.

Audio Commentary with Writer/Director Damien Chazelle and Composer Justin Hurwitz - A wonderful commentary track with the director and the composer, where they talk about everything from how scenes were shot to some great behind-the-scenes stories about things that happened on the set. We get so few informative commentary tracks these days (if we're lucky enough to get one at all), it's nice to listen to such an entertaining one. It gives you a great insight into how La La Land was put together.

Featurettes (1:19:58) - This section of the extras is divided up into the 10 shorter segments listed below, although they're really all part of a feature-length documentary on the making of the movie, which can be viewed together the "Play All" option that is provided.

Damien & Justin Sing: The Demos - These are two (primarily all black and white) segments that have the director and composer sing versions of the songs written for the film. These are pretty rough and frequently off-key, but they give you an idea of how these two songs came to be. The two segments provided here are What a Waste of a Lovely Night (1:55) and City of Stars (3:13). There's no "Play All" option here, so each bit must be watched separately.

Song Selection - This is basically just a variation on the typical chapters section that most home video releases provide, allowing viewers to jump to their favorite musical portions of the movie. 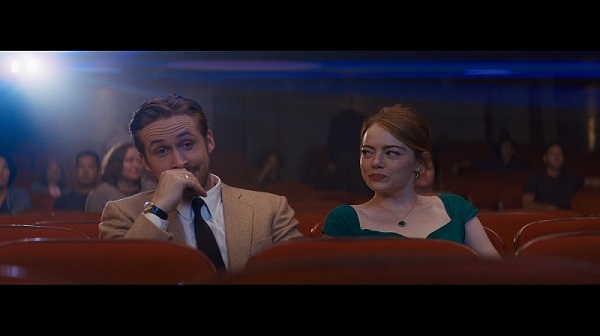 Despite its somber and audience-alienating conclusion, La La Land proves that musicals can still work on the big screen, providing a mix of both modernism and "Old Hollywood" that really works. This 4K version of the movie will sparkle on any properly equipped home theater and is definitely worth a spot in one's collection. This one's Highly Recommended.