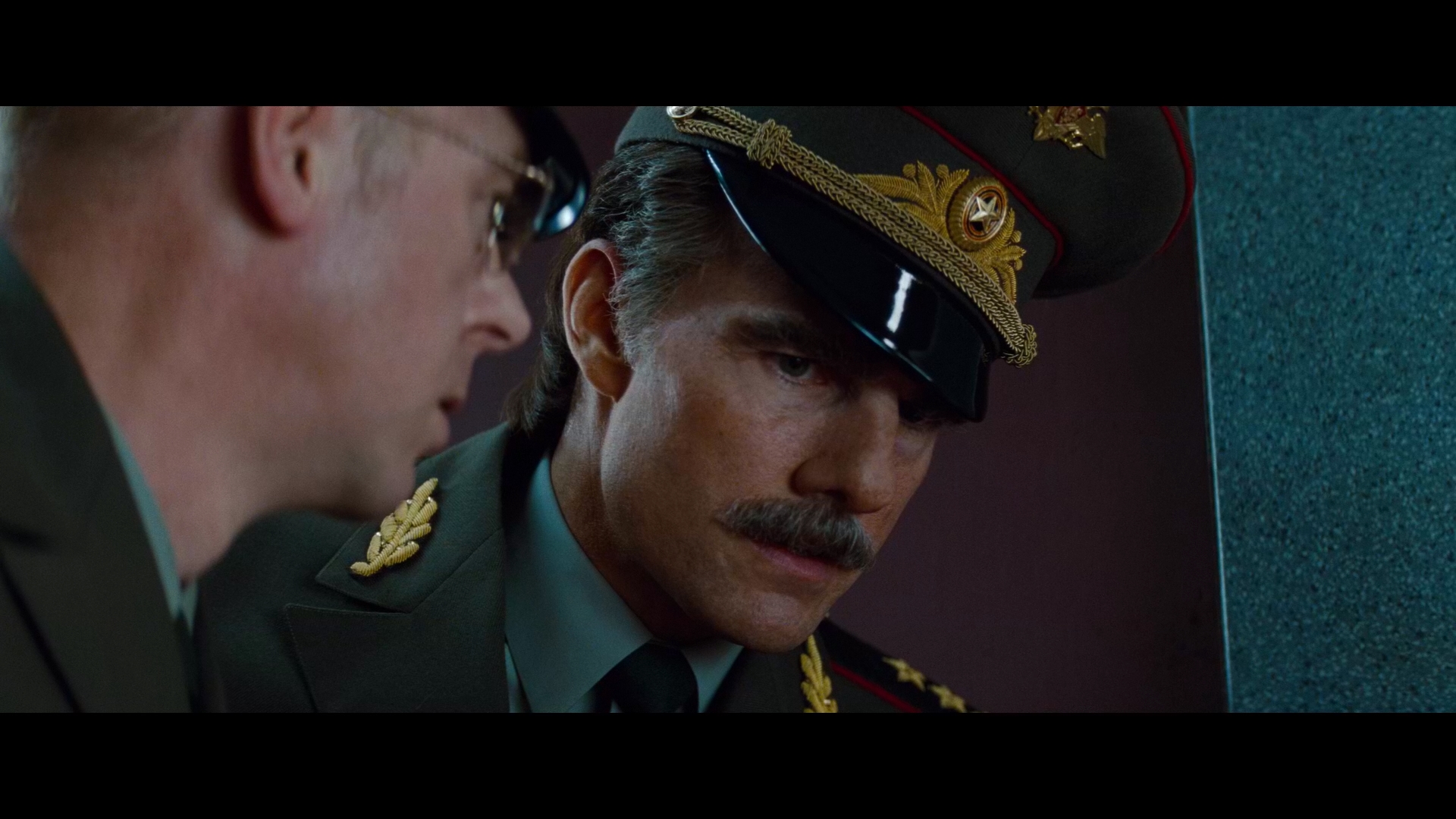 After JJ Abrams gave a much needed boost to the franchise with Mission: Impossible III, Director Brad Bird (best known for his animated work as director of The Incredibles and The Iron Giant) had a fairly big burden on his hands. Could he raise the bar from where JJ left off in his last movie? Well, not only does Bird (with help from star Tom Cruise and a story by Josh Appelbaum and André Nemec) meet expectations, he surpasses them - bringing fans what is arguably the best movie in the series.

What makes Mission: Impossible - Ghost Protocol so much fun is that not only does each scene in the plot seem to flow naturally to the next in terms of storytelling, but the stakes are especially high this time around - with Ethan Hunt (Cruise) trying to stop a madman from detonating a nuclear bomb. All the stunts and action sequences you'd expect are here too, with the movie's centerpiece being Hunt scaling the outside of the Burj Khalifa in Dubai, which is the tallest building in the world. This exceptional movie stunt is made all the more thrilling knowing that Cruise did the majority of the stunt himself (famously having the movie's insurance company fired and replacing it with another so he could perform the work). The gamble pays off, as it remains one of the best death-defying sequences to be captured on film (with IMAX cameras, no less) - all without the use of CGI (aside from digitally erasing the wires and harness holding our leading man up).

The plot revolves around Cobalt (Michael Nyqvist), a Swedish physicist with ties to the Russian military who believes that starting a nuclear war between the United States and Russia will result in a new era of peace between those who survived. In one of the movie's first big set pieces, Hunt and pal Benji (Simon Pegg) must sneak into the Kremlin and steal the nuclear codes before Cobalt can get to them. Things go awry and not only does Cobalt get the codes before Hunt can get to them, but he sets off a bomb in the process - leading Ethan and his IMF team as rogue agents who must save the world or be disavowed by their organization. Their mission - one they have little choice but to accept - is to stop Cobalt before he's able to launch a nuclear weapon. This "ticking clock" scenario drives the film, turning it into one of the best-paced (even at 133 minutes) Mission: Impossible adventures of them all.

The film introduces a new member of the IMF team, William Brandt (Jeremy Renner), who was originally designed by the creators to be a possible replacement for Tom Cruise in future installments of the franchise. Viewers will note that he's presented with much of the same qualities as Hunt, and the movie takes a few moments to let the audience know he's just as well trained. However, after Ghost Protocol's huge take at the box office (to date, it's still the most successful entry in the series in worldwide raw dollars), Cruise decided to continue his portrayal of Hunt, and although Renner's character appears in the next installment of the series, he'll be totally absent from this summer's Mission: Impossible - Fallout. Ironically, this isn't the first time Renner has "failed" as a possible replacement in a popular movie franchise (through no fault of his own, of course). He was also groomed to replace Matt Damon in the Jason Bourne series (see The Bourne Legacy), but that plan did also not pan out.

it's hard to believe that anyone with 4K capabilities and a love of Mission: Impossible wouldn't want to add this release to their collection. Not only is the film wildly entertaining, but, as you'll read below, the A/V presentation is pretty spectacular. Paramount has released all of the Mission: Impossible films onto 4K this summer, but if your budget only allows you to pick up one of them, I think this is the title to go with.

Mission: Impossible - Ghost Protocol lights the fuse in 4K in this combo pack, which includes two Blu-ray discs (one with the movie, the other with bonus materials) along with a code for a digital copy of the film (which redeemed for the UHD 4K version when I used mine on Vudu). The three discs come housed inside a black Elite keepcase, with two of the discs contained on an inserted plastic hub. A slipcover with artwork matching that of the keepcase's slick slides overtop. There are no front-loaded trailers on any of the three discs in this release.

Mission: Impossible - Ghost Protocol was shot on 35mm film using primarily the Arriflex 435, although IMAX cameras were also used for various scenes. Despite the latter, the movie retains its 2.40:1 aspect ratio throughout. The movie was originally mastered in 4K for its theatrical release, which means this new transfer is taken from a 4K digital intermediate. The result is a "true" 4K transfer that really pops with color and detail.

The HDR (including Dolby Vision for those with capable players/TVs) contrast boost here is sumptuous. The shimmering of the building in Dubai, the orange look of the sand, and then the burst of different colors when the team goes to India for the finale - it's all wonderful eye candy that really shows off what 4K can provide at its best. Black levels are inky deep throughout, and there's depth and detail in almost every shot. This turns out to be one of the best-looking 4K titles I own to date, and I'm happy to be able to give the 4K video a reference-quality score. This is a demo-worthy disc.

The 4K disc contains the same featured English 7.1 Dolby TrueHD track that is contained on the Blu-ray (which is the same version released back in 2011). Despite not getting an Atmos upgrade and despite this not being anything new compared to the Blu-ray in the audio department, the mix is unbelievably entertaining, with a real feeling of immersion. Of particular note is the sandstorm sequence in the film, which really provides the viewer/listener with the feeling that he/she is stuck in the thick of it with Ethan Hunt. Low-end LFE is impressive at times, and dialogue is crisp and clear throughout (and primarily front and center). You'll be hard-pressed to find 7.1 audio that sounds better than this - it's reference-quality stuff. 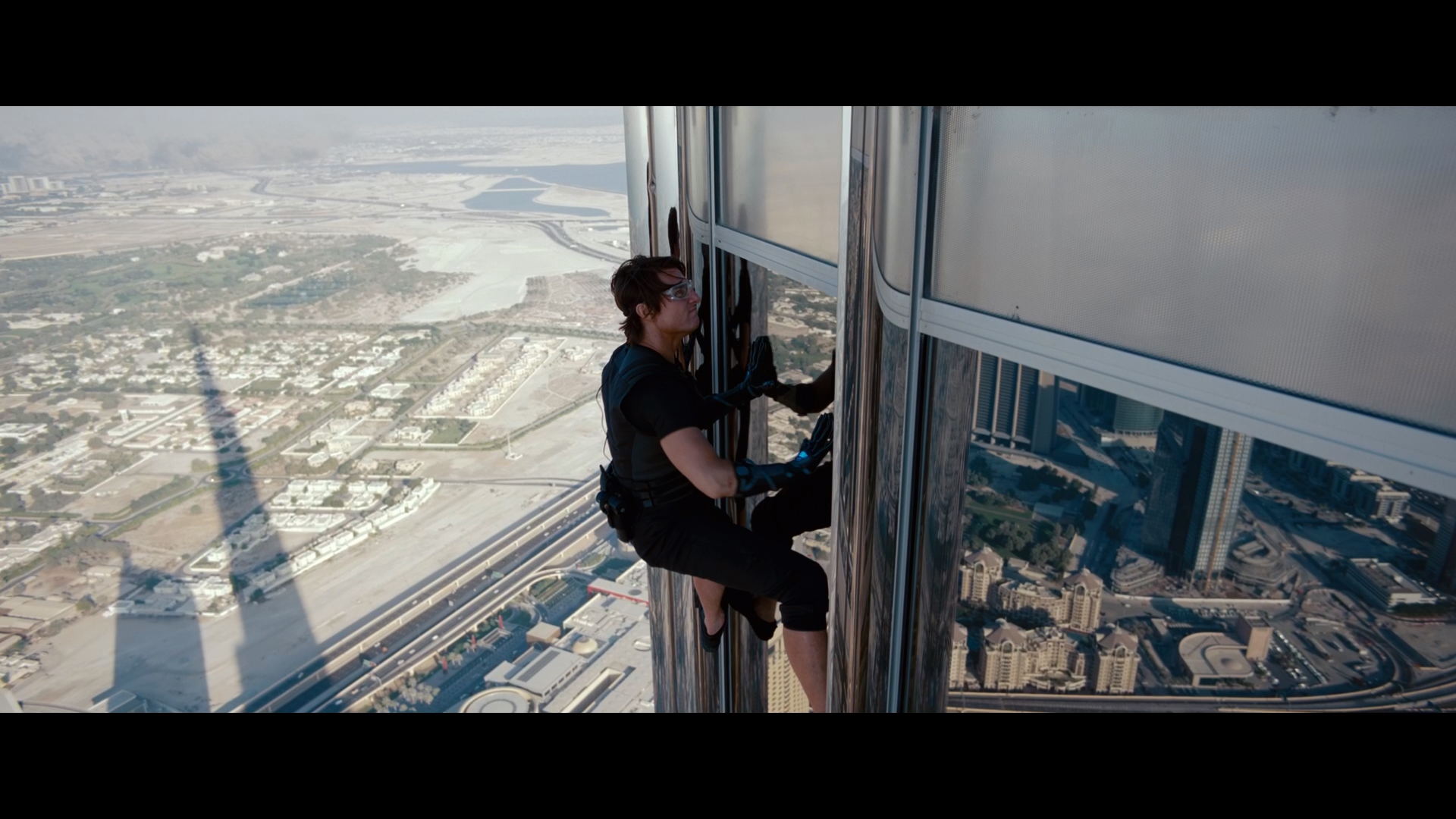 Note: The bonus features listed below are on the Blu-ray bonus disc only, meaning that there's nothing new here. The 4K disc contains no bonus materials 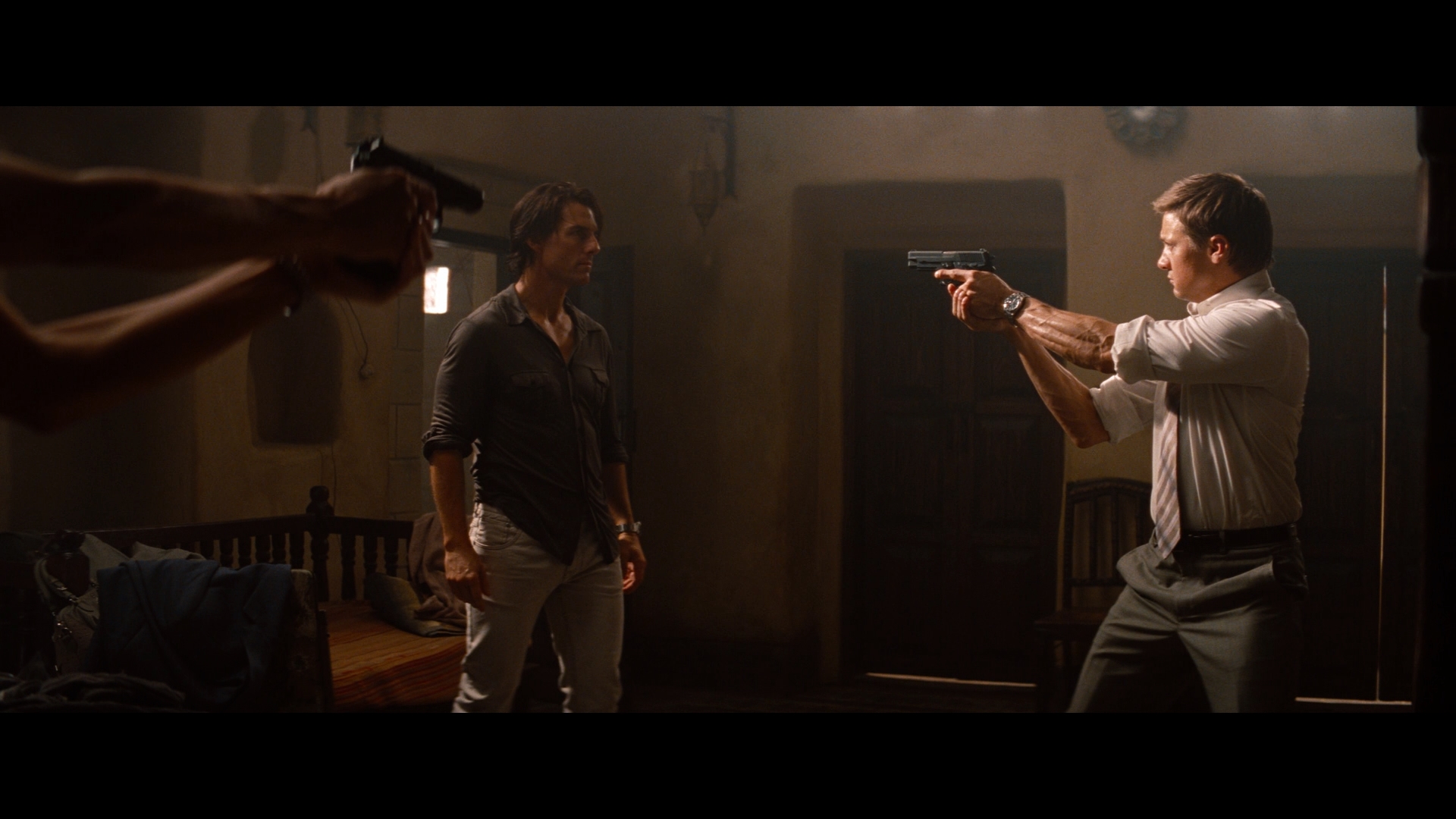 Mission: Impossible - Ghost Protocol is everything you'd want in an action movie and almost everything you'd desire in a 4K disc as well. With a high-stakes adventure for Ethan Hunt and his team and breakneck direction by Brad Bird, the movie takes its place as one of the best-executed films in this series. Add to that the reference-quality video and audio the 4K disc provides, and it all adds up to a great release. The only thing preventing the highest of marks is the fact that Paramount offers no new bonus features - everything is recycled from the prior Blu-ray release. Regardless, this one is still Highly Recommended.