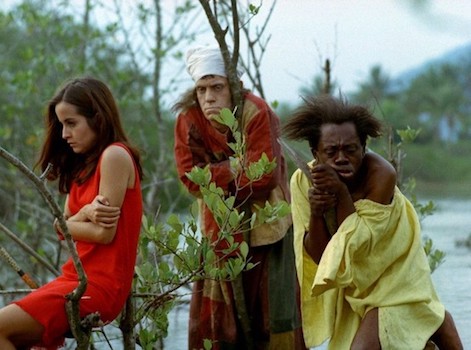 NOTE: The images accompanying this review are promotional stills that do not represent the quality of the Blu-ray under review.

Brazil's Cinema Novo movement, like many of the New Waves that swept through international cinema during the '60s, was an intense intellectual reaction against the commercial moviemaking of the day. Cinema Novo is looser, smarter, more political, and crazier than what came before in Brazil. But for whatever reason, Cinema Novo hasn't been as enthusiastically distributed in the U.S., as compared to the Japanese, French, or even Czechoslovak output from this era.

That makes Kino's 3-disc Blu-ray set, Joaquim Pedro de Andrade: The Complete Films, a rare treat. Andrade is one of the key filmmakers of the Cinema Novo scene. His feature films frequently take inspiration from Brazilian modernist art and literature of the early 20th Century, especially the work of two unrelated writers who are his namesake, Mario de Andrade and Oswald de Andrade. As Oswald's Cannibal Manifesto suggested cannibalizing foreign influences to sculpt a new Brazilian art form, Joaquim Pedro de Andrade pulls from established genres then manipulates and mutates them into something new and unrecognizable.

The first film in the collection, Garrincha: Joy of the People (aka Hero of the Jungle), is a 1962 profile of Brazilian football hero Manuel Francisco dos Santos, aka "Garrincha." The documentary spends as much time on the atmosphere out in the stands as it does showing the day-to-day of its crooked-legged protagonist. Andrade incorporates voice over, stills, and found footage to discuss Garrincha's pivotal role in Brazil's 1958 and 1962 World Cup victories, but mostly he lets his own poetic footage of Garrincha and his team in action wordlessly evoke the energy and drama of a great sports performance.

Andrade's first fiction feature, from 1966, is The Priest and the Girl. A young priest is sent to a secluded mountain town that used to be rich in gold and diamonds, but is now a husk. The old priest is dying, and the local rich guy Fortunato (what an apt name) is worried about the contents of the priest's death bed confession. Fortunato has been keeping a young woman, Mariana, as his adopted daughter, although he has plans to marry her. As the young priest grasps the nature of what is going on in the town, he reacts in horror and suggests that Mariana run away with his help. Unsurprisingly, there's some attraction between Mariana and the priest which complicates things. Andrade's storytelling starts off crisp and evocative, but gets more elliptical and trippy as the film goes on. As such, the second half is a little draggy, but it offers plenty of aesthetic and sensual excitations.

Macunaíma (1970) is Andrade's best known film in the U.S., thanks to New Line Cinema distributing it as one of their many midnight movies during the '70s. It's a brightly colored Pop Art picaresque whose titular hero begins life as a fully grown black man (Grande Otelo) but soon encounters a magic geyser that turns him into a handsome white man (Paulo José, worlds away from his turn as the ultra-serious, tortured priest in the last movie). In both iterations, Macunaíma is a lazy, selfish buffoon on the lookout for a cushier life and a sexier sex partner. (In one charming twist, José's version of Macunaíma impregnates a female guerrilla fighter, and their baby is played once again by Grande Otelo.) There's a vague throughline in the film's second half involving revenge against a fat cat industrialist and the retrieval of a good-luck pendant, but mostly Macunaíma is a cavalcade of subversive, absurd, and often tasteless vignettes. The intent is clearly satirical, even if the specific targets are not always obvious to a modern American viewer (this applies to most of the proceeding films too).

By 1972, the Cinema Novo movement is technically over, largely due to strict government censorship under Brazil's dictatorial military government. Andrade responds with a historical drama, The Conspirators, that uses official transcripts, journals, and poetry to recreate a famous failed attempt to overthrow the Portuguese colonial government in the late 1700's. Andrade's characters are beloved martyrs and national heroes, but he shows them to be as arrogant and foolish as the men in power whom they wish to depose. Although the tone of The Conspirators is much more serious than Macunaíma, Andrade experiments with the language and style, frequently rupturing the reality of the story and breaking the fourth wall. Some carefully chosen anachronistic visuals and music cues are used to make the parallels to then-present-day Brazil apparent -- subtly, so that the film won't get banned or the director won't get thrown in jail.

1975's Conjugal Warfare could be initially mistaken for a light-hearted return to the absurdity of Macunaíma, but it's a darker and crueler film. At that time, erotic comedies were the main box office draw in Brazil, and Conjugal Warfare has the ingredients for a facile sex comedy. The film's three stories revolve around loutish men -- a jealous old coot, a slimy lawyer, a self-satisfied student -- and the woman upon whom they inflict themselves. There are plenty of sex scenes, and they are appropriately goofy and grotesque. However, the central men are such exploitative garbage humans that any laughs tend to catch in one's throat. This is Andrade's purpose, as he emphasizes the toxicity of these toxic males, turning mindless delight into stunned horror. When the slimy lawyer is forcefully propositioned by a gay colleague, it plays not as lowbrow gay-panic humor but as a fittingly twisted comeuppance.

The final feature in the set, 1982's The Brazilwood Man, is a discursive period piece that suggests Alan Rudolph's The Moderns mixed with Luis Buñuel's That Obscure Object of Desire. Brazilian Modernist author Oswald de Andrade is brought to life by two actors, a man and a woman, and unlike Buñuel's tag-teaming heroines, both Oswalds appear onscreen together as complimentary characters. The Brazilwood Man is more philosophical than factual, spending most of its time on Oswald (and Oswald)'s pursuit of poetic, intellectual, and (of course) sexual delights in ways that don't quite amount to a proper narrative. Viewers not versed in Brazilian Modernism (like your trusty reviewer) might find themselves scratching their heads at the stylized dialogue, which seems littered with allusions to works I don't know. But even we philistines can enjoy Andrade's alternately lush and bonkers visual sense. 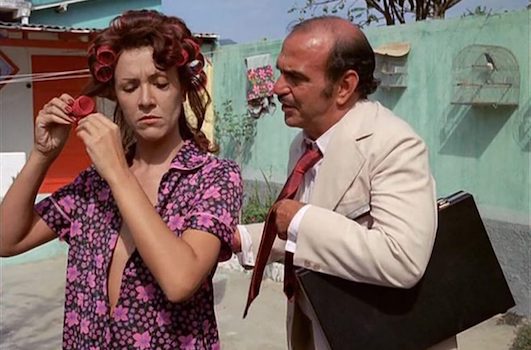 The Blu-ray
Joaquim Pedro de Andrade: The Complete Films is presented on 3 BDs, housed in a slightly thicker-than-normal keepcase. A booklet, featuring an essay by Fábio Andrade (of course, it would have to be an Andrade), is also included.

The Video:
All of the included films, features and shorts (see Special Features), are sourced from recent 2K restorations that are outstanding. The AVC-encoded 1080p 1.33:1 transfers (The Priest and the Girl is 1.66:1) are sharp and filmic. The black and white films are crisp, with rich blacks and nuanced contrast. The color films are bright and saturated. (In fact, sometimes the skin tones look a bit oversaturated, but it's not really a drawback, in this viewer's eyes.) Not much in the way of dirt or damage. Some of the title sequences are noticeably soft or dupe-y compared to the rest of the films, but that's understandable.

The Audio:
The Portuguese DTS-HD MA 2.0 mono audio (with optional English subtitles) reveals some limitations due to age and budget, but the audio restoration is just as excellent as the picture. No noticeable damage or post-production flaws.

Special Features:
This is a little tricky, since you could reasonably consider these short films part of the main "Complete Films" program. But I'm taking a cue from the discs' menu layout, which separates the shorts from the features into their own sub-menu. As such, I'm counting them as special features. All films are presented in AVC-encoded 1080p 1.33:1 transfers.


Final Thoughts:
Kino has recently released disc 2 from this set -- the one including Macunaíma -- on its own (with The Conspirators and two attendant shorts touted as extras). It's hard to blame them. Macunaíma is the cult-y crowd-pleaser in this bunch. However, Joaquim Pedro de Andrade is such an eclectic and elusive filmmaker, it seems a shame to boil him down to one oddball success. The complete three-disc set is a fuller -- and wilder -- experience. Alternately absurd, humane, mind-expanding, and twisted, this is a filmmaker with few peers. Add this set to your library. DVD Talk Collector Series. 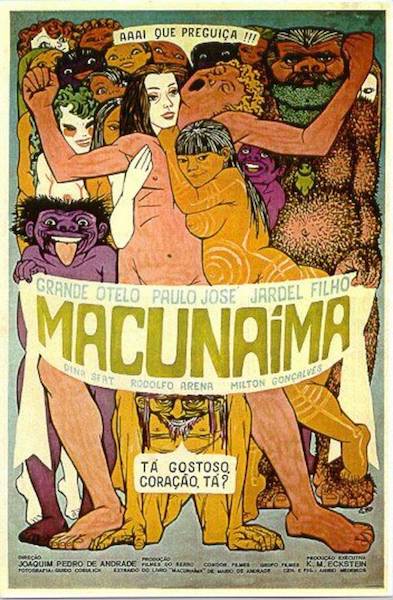