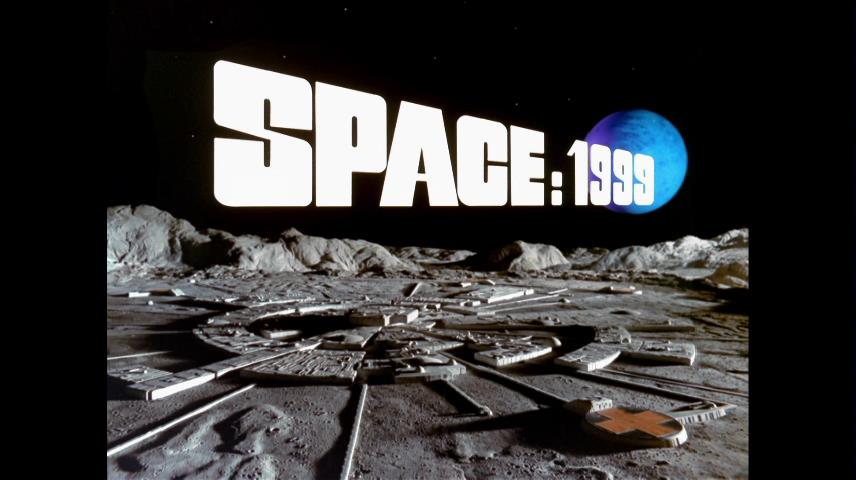 "Space: 1999" was sort of an attempt at a 1970s "Star Trek", which was finding a broader audience through syndicated reruns than it did on its original network run. Created by Gerry and Sylvia Anderson (who divorced after this show's first season), the premise involves a base on the moon called Alpha which for some reason includes a nuclear waste disposal area. 311 people are working there on September 13th, 1999, when this waste explodes (I guess they figured if that were to happen, it would be better on the moon than on Earth) and sends the moon out of orbit, cast off into outer space and the great unknown. They're able to pick up a TV news transmission before getting too far away from Earth which tells of earthquakes and other disasters happening, but that's the last any of these people hear from their home planet. Commander John Koenig, the show's central character and the main voice of reason, announces to everyone that he finds it best that "we do not try" to return to Earth as that would likely be impossible, instead depending on finding another distant planet where they can re-establish themselves. From here on each episode deals with their adjusting to life stranded on the moon as it hurls through space and exploring worlds that pass by, which is easy as they have a fleet of small ships known as Eagles to transport them onto these planets and also get them back to the moon if they need to. With that in mind each episode pretty much stands on its own, as there's little continuity between them and no "final" episode was ever produced to say just exactly how all of this ends. The American TV networks all turned the show down, so it was instead shown by local stations via first-run syndication though the same distributor that brought us The Muppet Show. 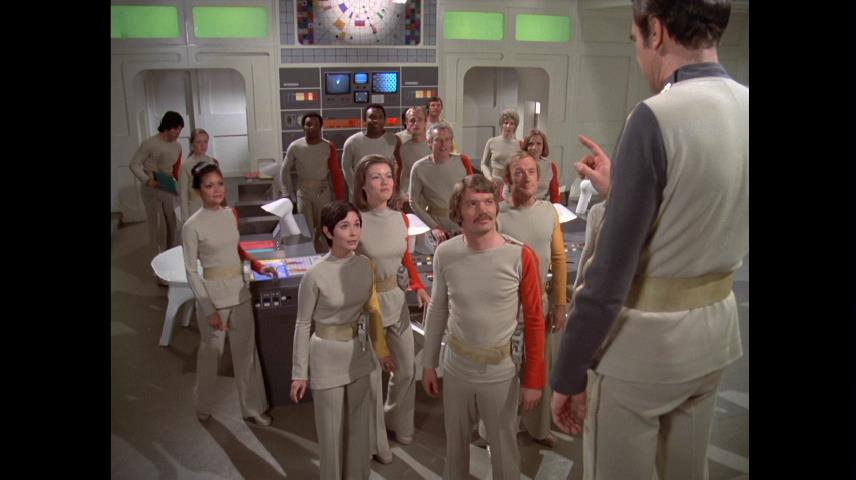 Martin Landau's real-life wife Barbara Bain co-stars as Dr. Helena Russell, who had a husband disappear on a previous space mission. The two of them eventually get romantic, and she's essentially the secondary character here who gets most of the lines. With 309 others on board, we never see all of them except as a few minor characters who come and go- a few are inevitably killed throughout the series. As finding a new home planet is the goal, most of the episodes deal with the moon coming into the vicinity of a planet and the crew checks it out as a potential place to stay. Unfortunately some of them simply don't have the right atmosphere- the first planet they find basically makes them go crazy when they try to settle there. Many others are already populated mostly by human-like creatures, who speak perfect English but aren't too friendly- they either don't want them there, or want to kill or enslave them. One episode finds them between two warring planets, who then use the moon as a battle station. "The Last Sunset" almost makes the moon itself the humans' new home planet, as an Earth-like atmosphere suddenly develops that allows them to venture outside. There's an encounter with the Voyager Space Probe, which hadn't even been launched yet when the episode was shot. In more than one instance they find people who appear to have been lost and graciously take them in, only to then have them attempt to take them over. The second season changes a few things, beginning with a new character Maya (Catherine Schell) who escapes with them from another planet that they end up destroying. She has the unique ability to shape-shift, and is simply taken in as one of the crew but definitely has that "new character" aura about her that other shows have had. (Did anyone ever ask why the show's title wasn't changed to "Space: 2000" at that point?)

The series has been criticized by some as being "boring," but while it has a few slow moments it held my interest. Landau's character simply seems determined to hold everything together no matter what might happen. Not many of the other characters get much development, but they all seem to still be sticking to their jobs despite never going home again. Being unable to suspend disbelief too much, I mainly wondered if running out of food was anyone's concern. Everyone keeps wearing their uniforms which are kept in good shape; I'm not sure how high a priority that would be if this were to actually happen. The "retro-futurism" was what I enjoyed the most, as this takes place in a time which was over 20 years away when first aired but is now 20 years in the past, and things obviously didn't turn out the same. The set designs have elements similar to Star Wars which was being developed around the same time, particularly the prominent white insides of bases and space ships. Being produced for TV there are obvious limitations that become all the more apparent on a large hi-def screen- the planet surfaces are obviously soundstages, and the flying ships are obviously miniatures. 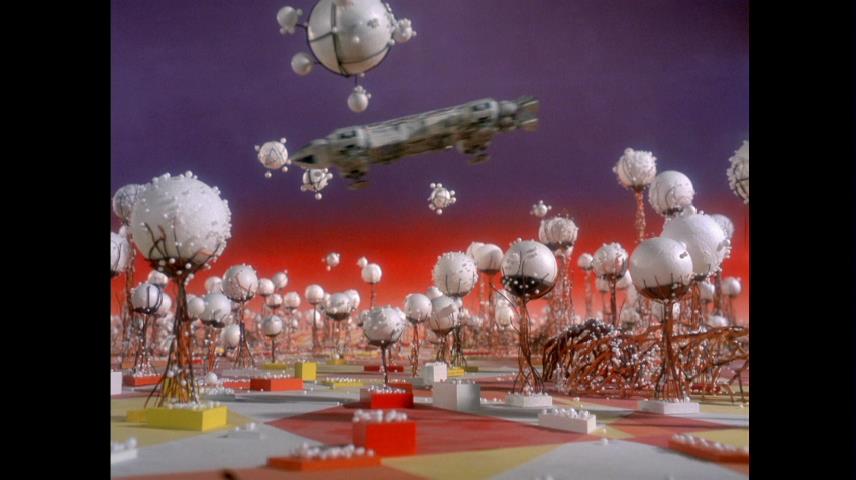 All 48 episodes are newly transferred from their original film elements, in proper 4x3 ratio. Some were said to be deteriorating, and are nicely restored here- there are no obvious signs of wear or fading. It could be argued that these shows were never meant to look this good- I had to laugh at some of the computers and gizmos that were obviously hand-painted and not even believable models, with cheap-looking stickers functioning as displays and gauges- this likely wasn't visible on analog broadcasts viewed on CRT screens. Most of the scenes where characters venture out onto planet surfaces obviously appear like soundstages, and the actors are replaced by little dolls in some vehicle shots as well. The most obvious ‘flaws' visible are the strings used on the space vehicles as they lift off and fly. This was likely a tricky thing as it certainly exposes the ‘fakeness' but to digitally erase the strings would still seem a bit wrong. The discs themselves aren't quite perfect- first of all there's a very slight jaggedness to most of the picture, similar to that of Warner's earlier Blu-Ray transfers though not nearly as obvious (note that I viewed these on a 75-inch screen, and this might not be noticeable on smaller displays.) There are also some compression artifacts, which often take the form of either horizontal or vertical line patterns and are most visible in the black side bars.

The original mono audio is included and is clean for the most part, only showing a few signs of age and likely better than it ever sounded in its original broadcasts. There is also a re-mixed 5.1 track which adds some interesting stereo effects, although the surround channels seem a bit weak. Shout Factory has already issued a statement about this saying that this is basically how they meant it to sound; apparently the mixes on previous releases were stronger. Hearing-impaired subtitles are included which like other Shout titles tend to describe the music a bit much. 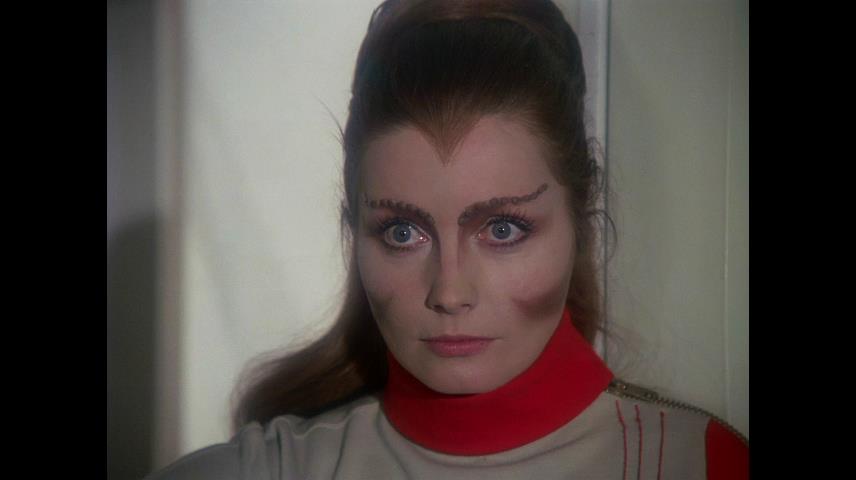 Some extras from previous sets have been carried over here, while others have been left out and new ones added. Each episode is given a series of still photos; there was a lot of smoking from the cast and crew between takes. I laughed at a sign visible on the soundstage saying that the floor of the set was "expensive" and would have to last "the life of the series," so everyone was asked to not put their cigarettes out on it! The pictures are presented as slide shows staying onscreen less than five seconds each with no chaptering, so it's a bit difficult to locate desired stills later. Four episodes are given audio commentaries, with two tracks for the "Dragon's Domain" episode- creator Gerry Anderson is featured on one of those plus the pilot episode's commentary.

The last disc in the set is devoted entirely to extras (mostly in standard-def) and includes lengthy interview segments with cast members Barbara Bain and Nick Tate along with director Kevin Connor and co-creator Sylvia Anderson, and a shorter appearance from Catherine Schell. About 30 minutes of "Vintage Interviews" are included also, shot during the show's production and presented with as little editing as possible. "These Episodes" takes up 100 minutes where writers and producers reflect on 15 episodes. "Moonbase Merch" has fan John Kenneth Muir show off many of the toys put out to tie in with the show (the only thing I remember from the 70s was a book and record set from Peter Pan Records). "Memories of Space" is another short piece with reflections from cast and crew, "Behind the Scenes" shows the modelmaking department and special effects production, and a few show promos, trailers and tie-in commercials are included, a few of which look like they were taken from off-air recordings. Finally there are several more still galleries with more production photos, collector cards and storyboards. 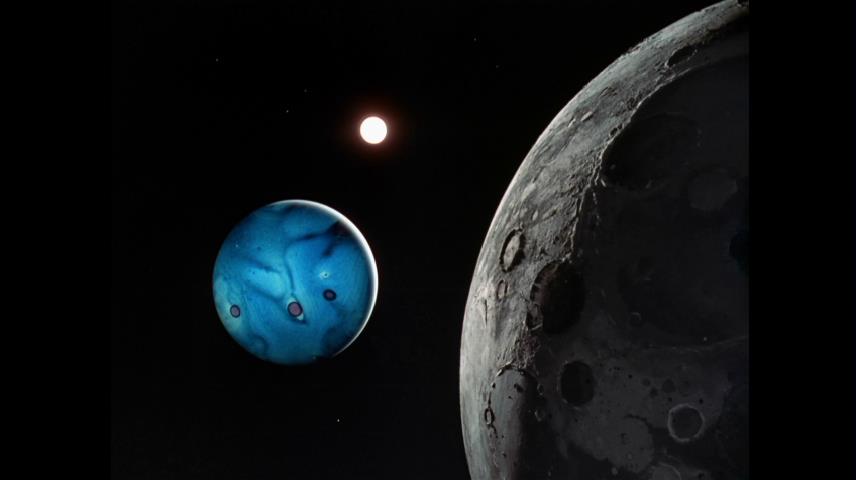 I enjoyed going through this series, although it is probably best viewed in smaller doses similar to how it was originally seen, one episode per week. The film restorations are immaculate and perhaps make the shows look too good (showing flaws in the production that might not have been that obvious on TVs of the era), but the less than perfect disc encoding loses it a few points in the picture quality department. Those with region-free players may want to seek out comparisons with the UK edition put out by a different label, or re-evaluate the quality of the previous US DVD release of the series if you have already purchased that. In any event however, "Space 1999" is a fun visit back to the 70s and a look at a future that never was.