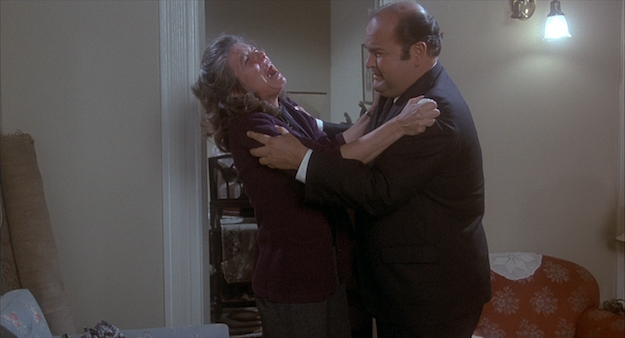 That's Anne Bancroft, the writer and director of Fatso (1980), in her costarring role as the nagging sister of Dom DeLuise's titular fat man. Fatso is a bittersweet comedy informed by the filmmaker and lead actor's Italian-American backgrounds. As such, it is big and emotional (i.e., somewhat silly, somewhat schmaltzy, but overwhelmingly compassionate).

This movie was clearly handmade for Dom DeLuise; his character, a 40-year-old bachelor who runs a greeting card shop with his sister, is even named Dom. One gets the sense that, while DeLuise is more than happy to goof on himself for a laugh, he feels at home in this character's predicament and pain. DeLuise is frequently in tears throughout the film (and on the Blu-ray cover art), but the movie never prods viewers to have the precise same reactions to those tears. Sometimes they provoke the giggles, and sometimes they make you really feel for this guy.

After a somewhat on-the-nose credit sequence showing the way that Dom's upbringing has always equated food with emotional comfort, the film takes us to the funeral of Dom's cousin. Another fat man with a heart of gold, only that gold turned out to be arterial plaque. Dom's sister Antoinette (Bancroft; the name is pronounced in proper New York Italian, "An-tuh-nette") urges him to see a diet doctor so that he doesn't wind up in an early grave too. Meanwhile, Bancroft the filmmaker, rather than the character, seems somewhat ambivalent about this doctor; he is shown with a lit cigarette dangling from his mouth during the entire examination. Unsurprisingly, the doc's treatment doesn't stick, so Dom moves on to a support group called (oh so tastefully) "Chubby Checkers."

There is more than a little fun to be had with Dom's difficulties in giving up food, including an uproarious sequence where he locks up all the food in his kitchen and then threatens his brother Frankie (Mel Brooks regular Ron Carey) with a kitchen knife to give him back the key. But writer-director Bancroft also clearly sees overeating as an addiction like any other. There are plenty of scenes in Fatso that feel like they could be in a straight drug recovery drama, only the drug in question here is food.

Besides the weight loss woes, the film has a Marty-like romantic comedy at its center. Dom falls for Candice Azzara's antique shop owner Lydia but, despite some obvious chemistry, he can't bring himself to ask her for a date. In a tearful confession to one of his support group sponsors, he flat out says, "If I didn't like her so much, I could ask her out." It's an interesting choice to have the conflict in a romantic comedy be the hero's inability to see himself worthy of the heroine's love, and Bancroft is smart enough not to wrap it up even after Dom and Lydia get together. One night, Dom tries to take Lydia out, but he can't find her; this uncertainty sends him into a tailspin and, eventually, a relapse.

One could argue that Lydia could use a little more dimension in the writing (although Azzara does a great job of picking unexpected choices in her acting). We get some sketches of her background -- enough to know she's a great match for Dom -- but it's hard not to wish for her to be more than just a patient and unconditionally loving presence. I do appreciate the underplayed joke that one of her favorite gemstones is apatite (get it, "appetite?").

Fatso is an imperfect mish-mash, but I loved watching it immensely. I laughed, I got choked up, I got thoughtful, then I laughed again. I don't think I've seen Dom DeLuise be more sympathetic or reveal more range than he does here. And it's hard not to imagine what might have happened if Anne Bancroft had tried her hand behind the camera again. She clearly had the knack for it. 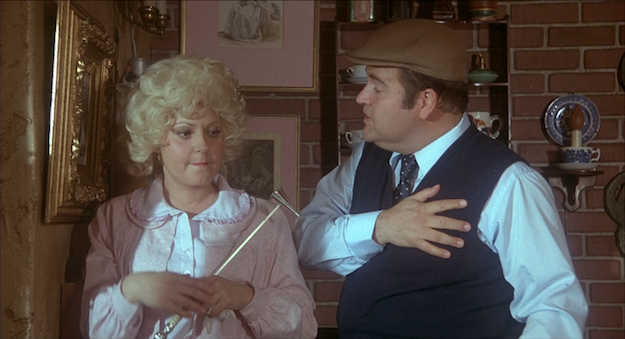 The Video:
Presumably, this AVC-encoded 1080p 1.85:1 presentation is sourced from an older master. It looks a little washed-out, and maybe slightly sharpened after the fact. Cinematographer Brianne Murphy's work is of its time, with a lot of bright studio work and generously employed diffusion. Even so, there's moments of strong clarity and depth.

The Audio:
The DTS-HD MA 2.0 mono audio mix has no glaring flaws. Dialogue is clear and natural. The Italian-inflected music score by Joe Renzetti is effectively incorporated. There is an English SDH track, but it has maddening gaps in the dialogue where the transcriber just didn't know what words the actors were saying. This person doesn't know what agita is or who Edward G. Robinson was because, for example, a conversation about the actor's work is subtitled as "(mumbles)." No, they aren't mumbling, friend.

(HD, 12:20) - Producers Stuart Cornfeld and Mel Brooks share fond memories about working on the film. Brooks, for his part, denies any ghost-writing or ghost-directing for his wife, although he does admit that Fox studio head Alan Ladd, Jr., picked up the film as a favor to him. At one point, Cornfeld discusses finding Brianne Murphy to be the cinematographer, because Anne Bancroft pointedly wanted a woman she could argue with over the look of the picture.

Final Thoughts:
Anne Bancroft's only effort as a writer-director is imperfect but utterly lovable. The cast, led by Dom DeLuise at his best, navigates the story's many shifts from broad comedy to introspective drama as effectively as director Bancroft. Funny, sad, and totally winning, Fatso comes Highly Recommended. 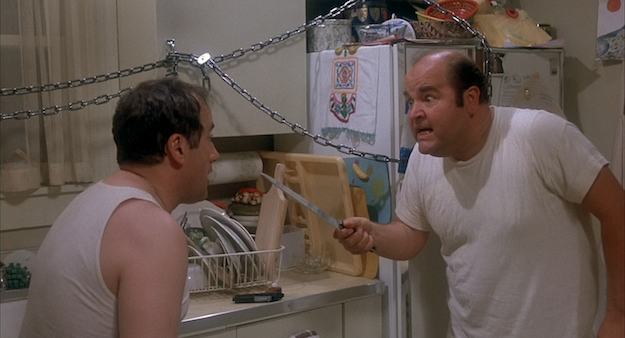