Doctor John Dolittle, the guy who "talks to the animals," is given another cinematic go-round with Robert Downey Jr. in the title role. This time they haven't tried to remake what's come before, but start roughly a few years after the 1967 movie ended. We find out that his wife Lily (Kasia Smutniak) took off on an adventure with John at home at their sprawling Dolittle Manor, and ended up killed along the way. This devastated him causing him to stop his business, close the gates and become a recluse among his animal residents. One day two kids barge in on him- Lady Rose (Carmel Laniado), the daughter of Queen Victoria (Jessie Buckley), tracks him down because the queen has suddenly fallen ill and is asking him to come up with a cure. Unfortunately that becomes the first big fault of this movie- Dr. Dolittle is known for being an animal doctor, and the tagline on the front cover says "He's just not a people person," so why is saving a person his main mission here? He's resistant to this but is reminded that the queen gave him the manor he lives in, and can have it taken away if she dies, so he reluctantly agrees. Arriving at the same time is Tommy Stubbins (Harry Collett) with an injured squirrel seeking his help, which he quickly renders. Tommy quickly becomes attached to Dolittle and his work and decides he wants to be his apprentice. 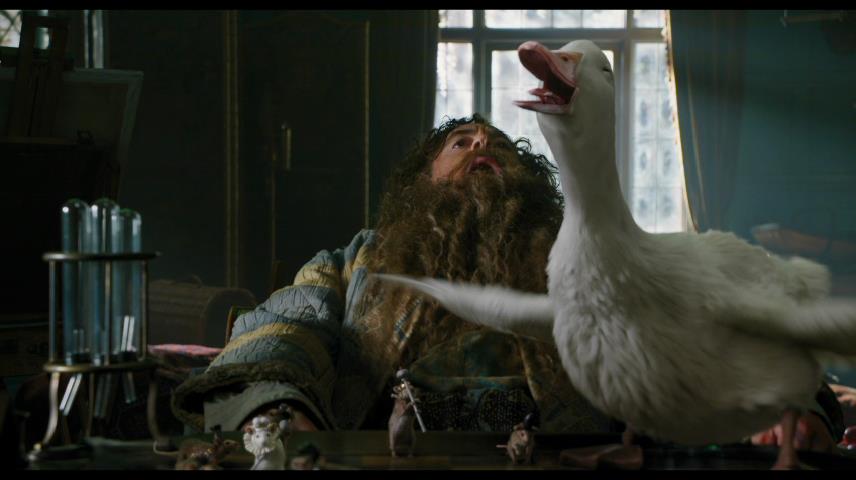 Arriving at the queen's bedside, Dolittle's rival from his school days Dr. Mudfly (Michael Sheen) is already there seeing what he can do and is immediately angry when Dolittle shows up to outperform him once again. A number of Dolittle's animals also join him in helping to diagnose what's wrong with the queen, and they decide she can be cured only by the fruit from a tree that grows in the same mysterious land that Lily was trying to find on her fateful journey. They take off on a large ship with Tommy rather daringly hopping aboard. Back at the castle it turns out something sinister is going on, with Lord Thomas Badgley (Jim Broadbent) sending Dr. Mudfly to pursue Dolittle and see to it that he doesn't succeed, as he's hoping to be next in line for the throne if the queen dies. It's not explained just how he manages to quickly catch up, but he does and it becomes a rather cartoonish pursuit. A big moment is when Dolittle and company are forced to stop at an island ruled by Lily's father (Antonio Banderas, almost unrecognizable), who isn't so happy to see them.

In what will probably be remembered as a very bad year for the movie business overall due to theaters being forced to close for several weeks, this was the year's first high profile bomb. It was supposed to be released last year but a number of re-shoots with different directors were made after test audiences didn't like it much- there is a bit of juvenile gross-out humor which was supposedly added at that point. The trailer still looked appealing to me, and Harry Collett is actually the one who comes closest to saving the movie as he's quite likeable and enthusiastic- he would be good in a sequel if that ever were to happen, Dolittle himself could even be written out if need be. Downey as Dolittle had mixed reactions, I thought he was a bit over the top with a fake Welsh accent but I could at least buy him in the role. Much of the dialogue is a bit difficult for Yanks to understand, in fact I needed to watch it a second time with the subtitles on and reading them carefully to get a full enough handle on the plot to write this review. All of the animal characters are computer generated and sort of blend in well enough, but they look too much like hand-drawn cartoon characters overlaid in a live-action movie. The 1967 movie did it better with real animals. Like the forgettable Eddie Murphy version, they also talk here with celebrity guest voices, including John Cena as a polar bear, Tom Holland as a dog, and Emma Thompson as Poly the parrot who narrates the story. They often try a bit too hard to appear "hip" to the kids in the audience, calling each other "bro" and using other expressions that didn't exist in the time period the movie takes place.

Again the story is pretty much a mess, as we have Dolittle on a mission to save a human rather than an animal, and there's a number of nonsensical twists and turns along the way. Still I didn't hate it as much as most reviewers seemed to- it seems like everyone involved meant well at least until the later studio meddling, and it's a somewhat amusing adventure whether or not you can help thinking about all the money that was lost on it in the end. 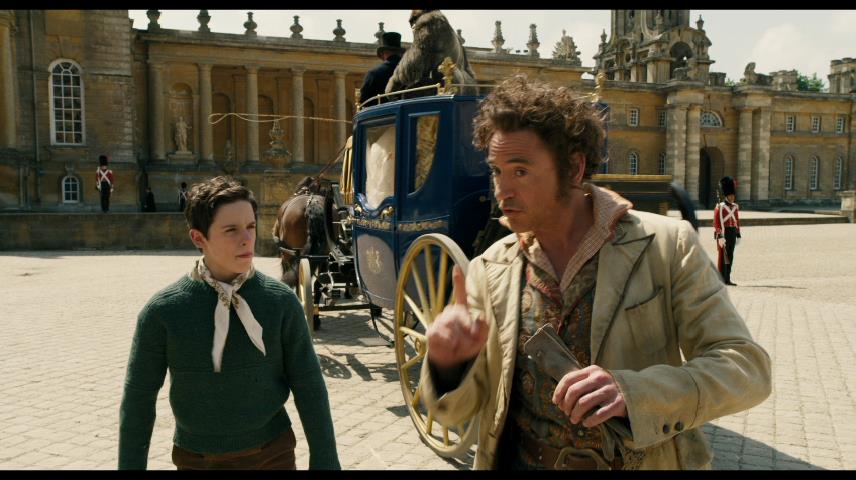 The Blu-Ray is presented in a proper 1.85 ratio, and the digital photography looks very good for the most part (a 4K disc is also available separately which might still outdo this.) The lengthy end credits include acknowledgement of 3D conversion work done by StereoD, but this movie was never shown in 3D in US theaters- likely because few moviegoers would be willing to pay extra for that privilege as few were willing to pay anything to see this movie at all, and even with 3D losing favor with audiences the industry seems determined to reduce or eliminate 3D showings rather than simply drop the upcharges for them. A number of shots look like they were composed for 3D and there are many moments that would have looked great if done right, but no 3D Blu-Ray has been released anywhere in the world so unless you were lucky enough to see a foreign 3D theater showing those efforts will be lost to time. Instead of a 3D Blu-Ray, we get a standard DVD in the package as it seems some consumers and studios simply refuse to let that format enjoy retirement. Expectedly it looks much softer and shows how obsolete the format is at this point.

The Blu-Ray includes a Dolby Atmos track(which you'll have to make sure your player is manually set to output bitstream as it's flagged for secondary audio even though none exists)- I'll say once again that my Atmos setup isn't the greatest, with only two extra speakers placed a bit awkwardly. None of the effects here really stood out for me, but the mix was still good overall with active surrounds that had me looking over my shoulder a few times. Both discs include a descriptive audio track along with Spanish and French dubs, as well as hearing-impaired subtitles and Spanish and French subs. 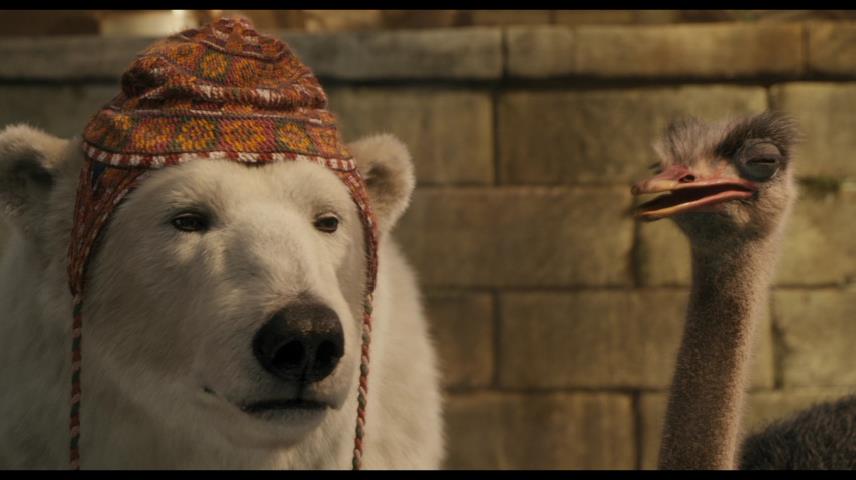 It seems that Universal has now made it standard for all extras to play after the movie. What we get are six short segments that are puff pieces for the most part, mostly focusing on the cast (Robert Downey Jr. claims to be mentoring Harry Collett). The most informative shows the design of Dolittle Manor. Most of these kinds of pieces are produced alongside the movie production and aren't able to look back on the theatrical failure or success that resulted. Both discs open with a trailer for Trolls World Tour (which as we all know has foregone a theatrical release with the current situation and premiered as a digital rental at the low price of $20- but a 3D Blu-Ray is coming which I have already pre-ordered!) along with short promos for the Universal Hollywood and Florida tourist attractions, 4K UHD (which I had to laugh at seeing on the standard DVD), and a very silly promo for digital copies (which this disc comes with, along with a choice of another free digital movie if you redeem before September 11 2020) claiming you can watch them "wherever, whenever". Sorry but I can't easily lug around a set of Atmos speakers and I don't want to watch anything without them. 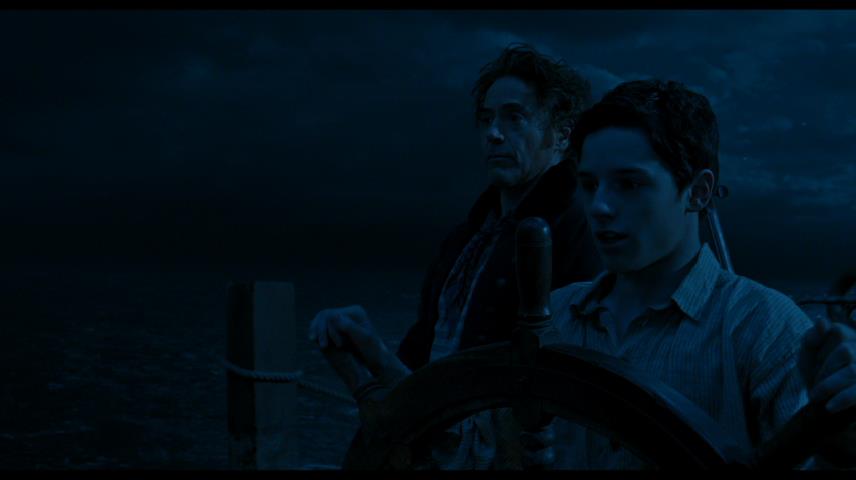 The name Dolittle may become synonymous with the word "bomb", as the 1967 movie also lost a lot of money (apparently the 1998 movie with Eddie Murphy at least turned a profit which shows there's no accounting for the taste of the general public.) Some may be morbidly curious to see how bad it is, others may avoid it for the same reasons. Giving it a chance it's kind of a mess and the accents make it even harder to follow, but there's some fun to be had if you don't take it too seriously and is worth a cheap rental.