It's been said a billion times, but sequels are both loved and hated- they're loved because it gives viewers a chance to see a continuation of a favorite movie, but they're hated because often the sequel just can't live up to the quality of the original. 1988's Coming To America was the result of an idea star Eddie Murphy had years prior and was one of that year's high points and has become an all-time favorite among many. More than 30 years later, Coming 2 America tries to recapture some of that magic, and left me with rather mixed feelings. 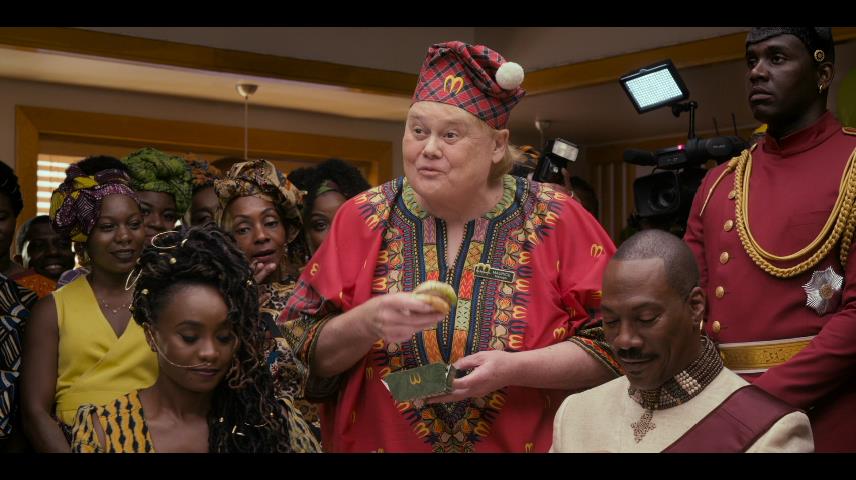 Most of the original movie's cast are back here- Eddie Murphy is Prince Akeem of the fictional African country Zamunda, still married to the American woman he met in the first movie, Lisa (Shari Headley). They live in the grand palace with their three daughters, one of whom is played by Eddie Murphy's real-life daughter Bella. Lisa's fast-food mogul dad (John Amos) has moved over and opened a McDowell's restaurant location there, with Louie Anderson on staff in what ended up being his last screen appearance. The reasoning for this sequel arises as King Jaffe (James Earl Jones) is about to die, which will make Akeem the next king. The country's rules state that only a son can take on the leadership role, which will pose a problem after Akeem's passing as he only has daughters. Zamunda is already being threatened with a hostile takeover by another fictional country, Nexdoria (ha ha), as General Izzi (Wesley Snipes) is just itching to lead an invasion. It turns out that he is the brother of Akeem's original arranged bride who was turned down at the alter, and he's still bitter about that- the uniting of the two families would have also united their respective countries. Barring that, a less peaceful solution would be to have Akeem killed which would leave Zamunda in an even worse position with no new king to take over.

It's here where the movie comes up with an event from the first movie that wasn't remembered before, which is kind of a cheap shot sequels sometimes take to get themselves made. It turns out that back when Akeem and his servant Semmi (Arsenio Hall) hit the bar in their trip to America, Semmi was so desperate to get laid that he picked up a pair of girls and brought them back to their apartment- Mary (Leslie Jones) ended up having sex with Akeem there, which he didn't remember because she was also smoking pot which disoriented him. (This will no doubt offend the easily offended, but the first movie's humor was far more vulgar and never intended to be taken too seriously.) This resulted in a son being born, who is therefore next in line after Akeem to become the king so he and Semmi make another trip to New York to track him down. They find him easily enough, turning out to be street hustler Lavelle (Jermaine Fowler, who was born just prior to the first movie's release.) He's been raised there by his mother who they also pay a visit to, and while Lavelle is a bit intrigued about being a prince he won't leave America without his mother and uncle so they all return to Zamunda. This of course makes things a bit awkward as Lisa now has to deal with Mary being around, though there isn't a lot of jealousy as Mary was just a one-night stand before Akeem even met Lisa. Mary is quite annoying regardless.

Lavelle has to pass a few tests of strength and knowledge before he can officially be made prince, and Akeem's oldest daughter resents him as she feels she should rightfully be the next in line to lead the country regardless of her gender. General Izzi is meanwhile eager to set up Lavelle with his daughter to be married quickly, as that will get the political results he desires. On first viewing I admittedly was a bit tired and almost nodded off during the movie, as I mainly found the newer characters annoying and the whole plot just a silly excuse to make a sequel. I decided to give it a second viewing however in a more awake state before writing this review, and I had a quite different reaction that time. On one hand it's still a rather shameless sequel relying too much on something ridiculous that went unseen in the first movie, but the original's spirit still continues for the most part. Getting the original cast was an impressive feat; having replacement actors for any parts would have made the movie look especially desperate. There's plenty of callbacks to jokes in the first movie, and Murphy and Hall's old man characters in the barbershop make an appearance also. They even pull off making King Jaffe's death funny, with a funeral being held while he's still alive (with several surprise guest stars). 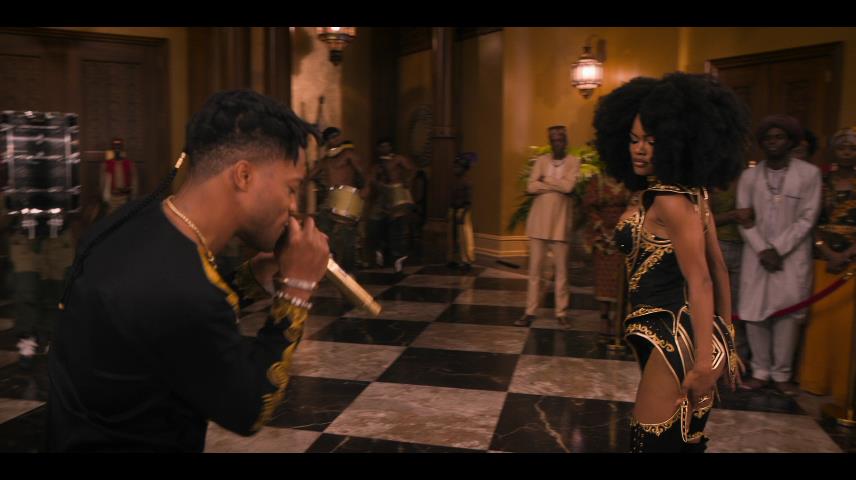 The COVID pandemic of 2020 squashed this movie's chances of a theatrical release, and Amazon picked it up to debut on their streaming service. As with a lot of material that debuted on streaming, it's presented in a rather weird aspect ratio- about 1.9-something to 1, just a bit wider than the standard 1.85 but not as wide as scope 2.35. While it probably would have benefited from a 4K disc, this Blu-Ray looks impressive on its own. Details shine through, colors are bright and I did not see any compression artifacts or banding.

The 5.1 mix in DTS Master Audio is decent if a bit modest, with little surround activity but the overall quality leaving me with no complaints. A descriptive audio track is included along with dubs in the following languages: German, Spanish (both Espana and Latinoamerica), French, Italian and Japanese, with subtitles in those languages plus Dutch, Norwegian, Romanian, Finnish and Swedish. Separate hearing-impaired format English subtitles are available in addition to the standard ones. 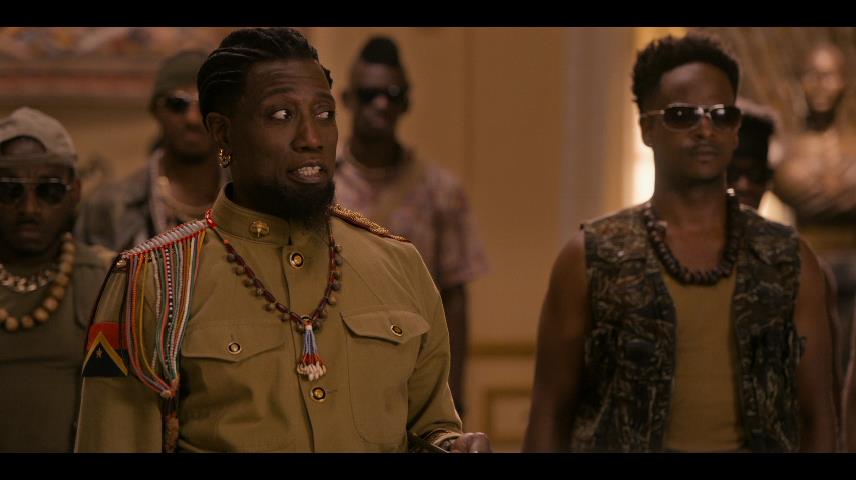 An impressive 25-minute extra tells you probably more than you'd ever want to know about this movie (aside from any real justification for its rather ridiculous plot). You get insight from the main cast as they remember the 1988 movie, there's an extensive look at the costuming and even a few remarks from John Landis who had no direct involvement here. Director Craig Brewer also adds a commentary track where he talks enthusiastically about the movie, giving the usual complements to the cast and crew that we're used to hearing. A "Trailer Gallery" promotes several other Eddie Murphy titles from Paramount- we get the original trailers in hi-def for 48 Hrs, Imagine That and Norbit, Harlem Nights in standard-def widescreen, a slightly modified trailer for Dreamgirls and newly-cut promos for the first Coming To America, Beverly Hills Cop and Trading Places. 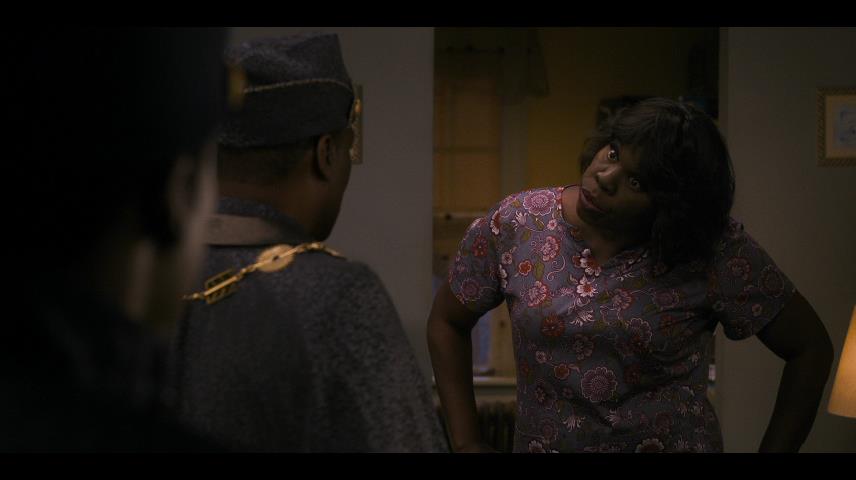 Not having access to Amazon Prime (which has one of the more annoying interfaces of the major streaming services) I didn't pay much attention to the general reaction to Coming 2 America until I had a chance to see it on disc. I sensed the reactions were mixed though, and this is quite an easy case for that. The overall plot elements added in order to justify this sequel's existence were quite ridiculous in my opinion and I was set to give this a "Rent It" rating, but I've revised that to "Recommended" after giving that a bit of a pass. It doesn't break any new ground but fans of Coming to America should still be mostly pleased to see the original cast back together in what seems to have been an enjoyable experience.