Released in 1978, Almost Summer is one of those movies that was only marginally popular at the time and never got released on any home video format until now. The poster art makes it look like a typical drive-in teen comedy, but once this one lures you in with a beach party scene at the beginning, the focus switches to a high school election, which might not be what the target audience had in mind. 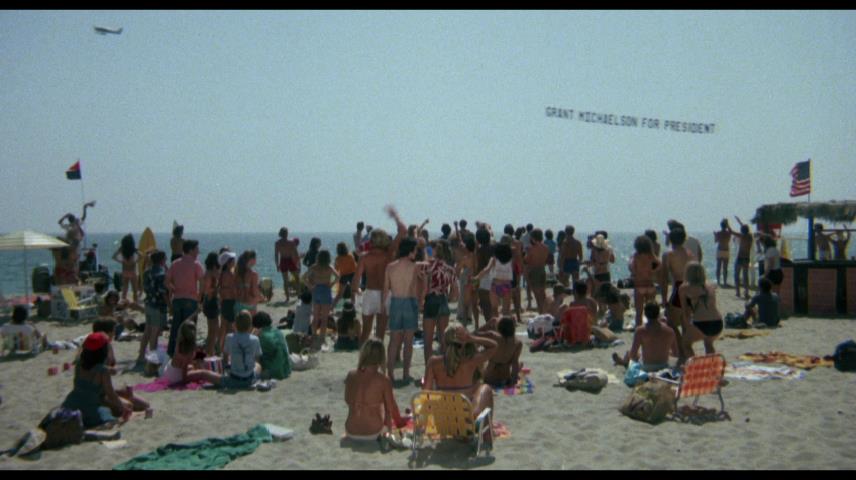 Bruno Kirby is Bobby, the "schemer" common in many high school movies. He's been pushing a candidate for next year's student body president whose only competition is Bobby's ex-girlfriend Christine Alexander "The Great." Besides wanting to see her fail he also has some money riding on the election's outcome- but Christine gets his guy suspended from school and thus disqualified. Not letting her win that easily, Bobby seeks out a new contender. Enter new guy Darryl (John Friedrich, whose next movie would be Thank God it's Friday.) Bobby's sister Donna (Didi Conn of Grease, who I initially thought was imitating the character there until I realized she was the same actress) already has a crush on him. Most of the school doesn't know he exists though, he's just a normal everyman rather than a famous jock like current president Kevin (Tim Matheson) or top student like his competition, and Bobby capitalizes on that using "You don't know me, but…" as his campaign slogan. The big question of course is who will win?

Despite the movie's title, there isn't much excitement for the school year to come to an end, if anything the ones concentrating on the election seem to be looking more forward to coming back in the fall. (The schools I went to didn't even hold their student elections until the fall semester started, which confused me here a bit until realizing they'd be taking office next school year rather than a week before school ended.) A few of my favorite 70s teen movie elements still make their way in here though- there's a hot dog stand which serves as a popular hangout, a food fight breaks out in the cafeteria, and even a bit of shower nudity gets in while maintaining a PG rating. The cast is obviously too old to be playing high school students, but their performances make it work anyways as they seem to be intensely into their characters. Sadly there isn't really any disco music in this, the closest we get is a subplot about a girl soul singing group who wants to perform at the prom. The title song is contributed by three members of the Beach Boys but under the name "Celebration" which the Blu-Ray cover seems to brag about reaching as high as #28 on the Billboard charts. The cover also argues that this movie "paved the way" for the John Hughes teen comedies in the 80s which is fair to say- it tries its best to be smart while still maintaining an aesthetic for the drive-in crowd. 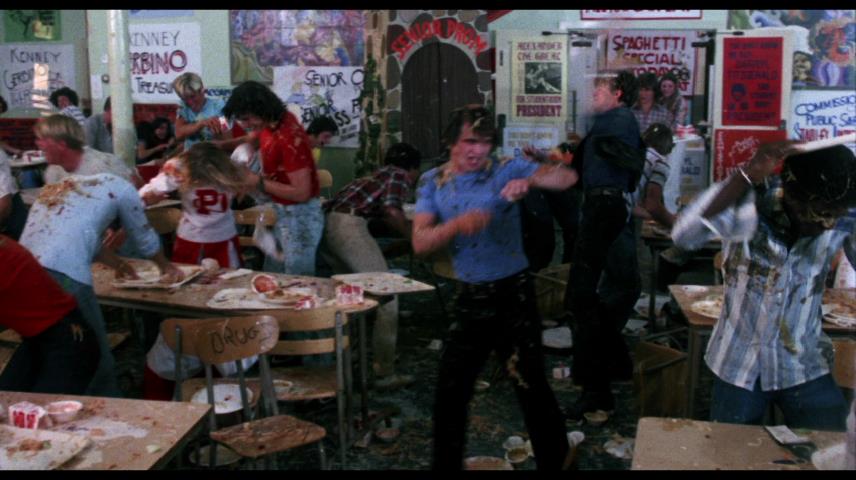 The Blu-Ray is presented in the proper aspect ratio of 1.85, and appears to be from a print judging from the reel change-over cues I spotted in a few places. It's in mostly good shape aside from a few random splotches throughout, and I appreciate the lack of fake sharpening or any obvious noise reduction. It doesn't look pristine but it was never meant to; there's a bit of film grain and the shots appear just a hair out of focus. Although some part Scorpion titles had some bad compression artifacts, I'm glad to report that the movie transfer here does not show any even in dark scenes. (The usual banding during the company's logo at the beginning of the disc is still present, but not to worry.)

The mono audio encoded in 2-channel DTS Master Audio is nothing special but adequate, sounding slightly muddy but reasonably clean for what it is. Hearing-impaired subtitles are included using small lettering and somehow leaving out a few words here and there. 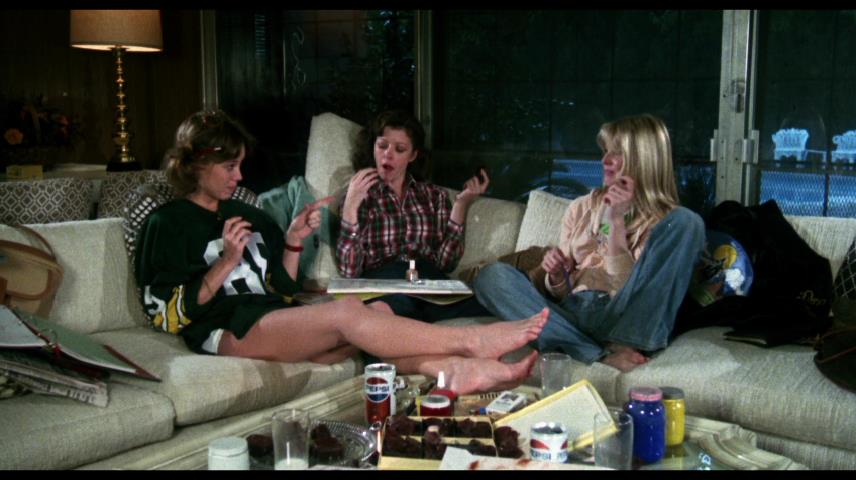 Four separate interview segments are included, all but one running near 20 minutes and totaling an hour altogether. This seems to be common for Scorpion and other boutique labels, giving some good candid insights into the movie. Director Martin Davidson (probably best known for Eddie and the Cruisers and The Lords of Flatbush) recalls shooting the movie, which was the result of two different movie ideas being combined into one. Lee Purcell recalls that she and other cast members were brought along on the Beach Boys' 1978 tour to promote the movie, which was fun but they eventually couldn't remember what city they were in. Tim Matheson talks for about 27 minutes about most of his acting career through the 70s and 80s, including some obscure TV series and other movies you might have forgotten about. Costume designer Sandra Davidson only spends six minutes on her part in the movie's production, mainly using a character's prom dress as a big reveal near the end. These are all shot on hi-def video in 24fps, and the clips from Almost Summer seen during them exhibit some pretty bad digital artifacting which thankfully didn't make it into the presentation of the movie itself. More than one of the speakers comments that they hope this Blu-Ray release will allow the movie to find a new audience as it hasn't been seen much until now.

A "Trailers" option in the menu shows the trailer for Almost Summer plus some other movies that sort of fit with its genre in varying quality, all encoded as separate titles but only accessible by chapter-skipping as they play in sequence: California Dreaming, Teen Witch, 9/30/55 (the original title for the limited-release movie better known as September 30, 1955) and Where the Boys Are ‘84 with the video going stuttery halfway through. 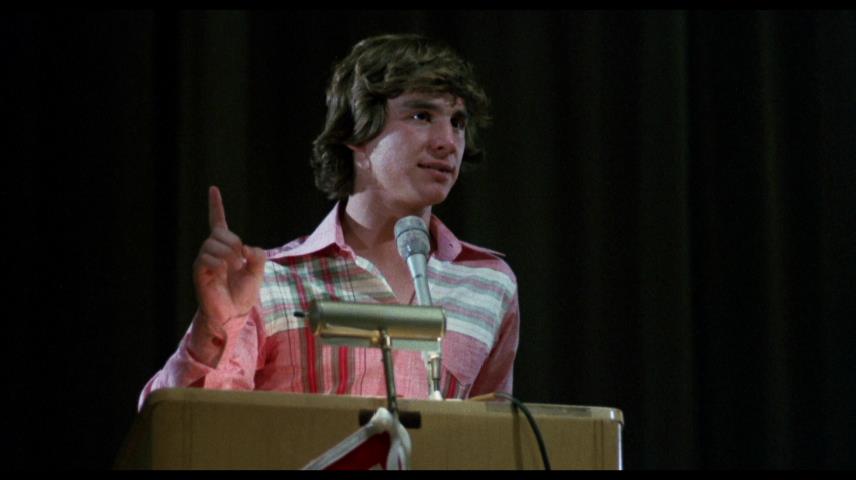 Almost Summer may not be the greatest film made in the 70s, but it's entertaining enough for fans of this type of movie to check out and I always applaud releases of films from this era that so far had missed being released on video which was literally in its infancy during this time. Despite being the first supporter of laserdisc, Universal still has several titles that haven't seen the light of day on home video but have either been released on Blu-Ray by Scorpion and other small labels recently or are slated to come out this year- keep them coming!