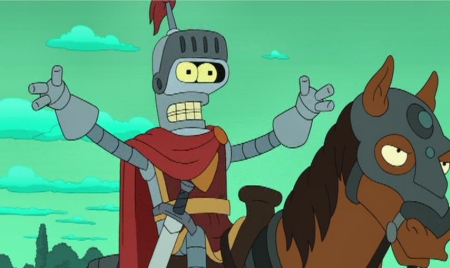 As creations like Fox's own Family Guy would prove, strong DVD sales make executives take notice. Groening approached the studio in 2006 with a proposal to create a new direct-to-DVD Futurama adventure, paving the way for rumors about a proper weekly revival for the series. These negotiations led to the announcement of four direct-to-DVD movies, which would later be reconfigured as sixteen episodes airing on the Comedy Central network. The first of these movies, Bender's Big Score, was released to DVD last November and received generally solid reviews from fans and critics alike (including yours truly). Even so, the four-year gap was evident at first: though it ended strongly, this grand re-opening celebration started out a bit uneven. For this reason, I had high expectations for the follow-up effort, The Beast With A Billion Backs...which turned out to be even less like the Futurama of old, thanks to an uneven, episodic flow and a generally flat third act. With this gradual decrease in overall quality, I hoped that the third film in the series, Bender's Game, would get things back on track. If nothing else, change was on the horizon: this outing promised a more fantasy-themed adventure in lieu of the series' traditional sci-fi canvas.

Luckily, this "roll of the dice" turned out to be a modest step in the right direction...and as expected, it's a decidedly different beast than the first two outings. Closer in tone to the episodic Beast With A Billion Backs than the time-travelling love story of Bender's Big Score, Bender's Game still manages to pack in more successful laughs than both previous outings. This time around, Bender wallows in his lack of imagination after Cubert and company shun him from their game of "Dungeons & Dragons". Determined to act even less logical than ever before, Bender's wacky new imagination quickly lands him in a mental institution.. Elsewhere, dark matter prices are on the rise, thanks to Mom's monopoly on the fuel market. Professor Farnsworth tells of his "early years" with the "young woman", and how his discovery of an energy crystal---which helped to convert dark matter into fuel, of couse---was stolen when their relationship went sour. In anticipation of this event, he developed an anti-crystal of sorts that would negate the potency of the fuel, so it's up to the Planet Express crew to put a stop to her monopolizing ways. Somewhere along the way, we end up inside Bender's imagination, which has subconsciously brought together both parties in a fantasy-fueled adventure. 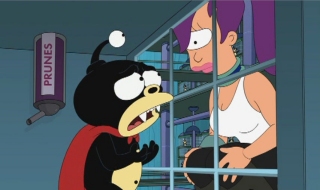 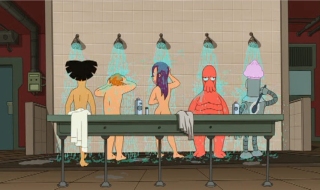 For obvious reasons, it's easy to see that Bender's Game doesn't attempt to keep things simple. Like The Beast With A Billion Backs---and to a lesser extent, Bender's Big Score---subplots undergo wild mood swings, but the story stays on course most of the way. Though the fantasy portion of this 90-minute adventure doesn't even kick in until the 50-minute mark, it maintains something of a loose focus before shifting gears abruptly. The relatively disappointing Beast With A Billion Backs followed a similar pattern---but luckily for us, the jokes are funnier this time around, which leads to a much stronger replay value in the long run. In fact, Bender's Game may be the most satisfying Futurama film yet; even though I somewhat prefer Bender's Big Score overall, I might return to this fantasy-fueled romp more often. It's a fair trade and one that should please fans who didn't care for the last adventure. At the very least, Bender's Game has increased my anticipation for the fourth and final (?) Futurama film: if we're lucky, the creative team will end things on an even higher note.

Fox's DVD presentation of Bender's Game is roughly on par with the first two feature-length installments. The technical presentation is certainly up to par and the bonus features are entertaining and well-rounded, creating a solid one-disc release that Futurama fans can't help but enjoy. Let's take a closer look, shall we?

Like Bender's Big Score, Bender's Game is presented in 1.78:1 format and enhanced for widescreen displays. This being a Fox "Special Screening Copy", heavy compression artifacts (and the studio's watermark) appear sporadically, preventing a proper visual rating from being awarded. This also made screen captures difficult to obtain, but one DVD-Rom player managed to display the picture correctly. Should a final copy be sent over, this section will most certainly be updated.

The film's Dolby Digital 5.1 soundtrack is lively and active, though not much more so than the original series. In any case, dialogue is clean and clear, music cues are typically strong and a few clever directional effects can be heard along the way. English, Spanish and French subtitles (and Closed Captions) have all been included during the main feature, but not for the bonus material. It's disappointing that some studios continue to overlook this portion of DVD presentation. 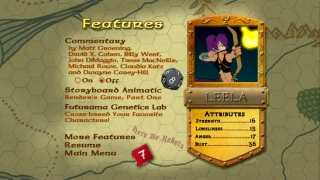 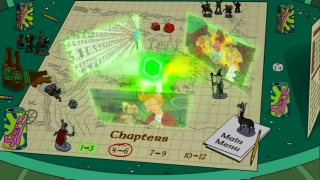 Seen above, the animated menu designs are basic and easy to navigate. The 89-minute main feature has been divided into 12 chapters, while no obvious layer change was detected during playback. The packaging was not provided with this disc-only screener, but Bender's Game will most likely continue the Futurama films' eco-friendly paperboard design.

Next up is a complete Story Animatic (21:46, below left) for "Part One" of Bender's Game---AKA the first of four episodes, once these are finally aired---and like the animatic presented on The Beast With a Billion Backs, this is an interesting extra for several reasons. Not only do we get to see early sketches of the segment presented in order, but a rough version of the final audio is also included. While there are several lapses in action along the way, the alternate dialogue is worth keeping an ear out for.

Our next extra is the curious Futurama Genetics Lab, a rather straightforward menu-based game. Viewers can choose two of several key Futurama characters and click the "mutate" button, which displays a piece of full-color art along with the hideous new character's name. Toadberg for the win!

Also here is "D&D&F (AKA "Dungeons & Dragons & Futurama", 7:02), a brief chat with David X. Cohen, writer Mike Kaplan and non-fan Mike Rowe. These three talk about their nostalgic memories of the game, or lack thereof, while sharing a handful of D&D-influenced scenes from earlier Futurama episodes. A related Easter Egg, hidden somewhere on the sub-menus, takes this little chat one step further. You have been warned: the nerd is strong with this one. 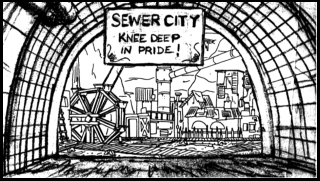 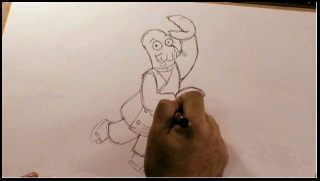 "How to Draw Futurama in 83 Easy Steps" (7:51, above right) is next, featuring several members of the Rough Draft crew and their sketches of Zoidberg, Leela and Bender. Some staff members are more helpful than others---and if you're looking for a serious art lesson, don't get your hopes up. On a related note is another 3-D Model Gallery (5:03) with commentary from several animators, in which a number of ships from the film's "Demolition Derby" sequence are put on rotating display.

A number of shorter extras close things out, leading off with a Deleted Scene entitled "Cup or Nozzle?" (1:02). This short sequence, which involves the kids at a treat stand, is presented in rough animatic form and bookended by finished clips where it would've fit in. "Blooperama 2" (1:48) is another session with several key voice actors goofing around and flubbing their lines. There's also an Anti-Piracy Warning (1:11) featuring Bender that spoofs those PSAs on all your favorite discs, as well as a Preview for Into the Wild Green Yonder (1:12), the fourth and most likely final Futurama film.

All bonus features are presented in anamorphic widescreen and 1.33:1 aspect ratios, but no subtitles or Closed Captions are included. This is a satisfying assortment of extras overall, roughly on par with those found on The Beast With A Billion Backs.

It's certainly a modest step in the right direction, but there's no doubt that Futurama still hasn't quite returned to form. The long-standing half-hour format simply has a bit too much trouble staying completely on track for 90 minutes---but luckily for us, there are plenty of terrific sight gags, one-liners and clever twists along the way. Most fans will find Bender's Game the most satisfying of the three Futurama films, though I still prefer the more ambitious Bender's Big Score overall. Fox's DVD package follows suit with the other two films, combining a decent technical presentation (screener issues aside) with a batch of amusing and appropriate bonus features. Those who've kept up with the Futurama gang should find Bender's Game a worthy enough effort, while those new to the franchise will want to choose a much earlier starting point. Recommended.