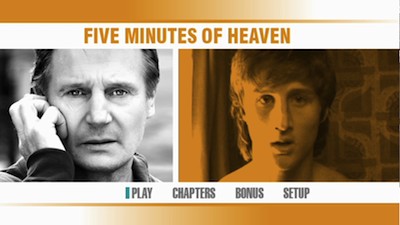 The long-term effects of violence between Protestants and Catholics in Northern Ireland in the 1970s is explored in the drama Five Minutes of Heaven, a movie about revenge and loss with a title that bears a lot of portent for a story that derives its premise from a religious conflict. It's not exactly a portent the movie delivers on, but there are still some interesting things about the film for me to mildly recommend it.

Liam Neeson plays Alistair Little, who murdered a Catholic worker in 1975. The killer was 17, the victim was 19, and the younger brother of the victim, who witnessed the whole thing, was only 11. That young boy, Joe Griffin (played by Bloody Sunday's James Nesbitt) grew up being blamed by his mother for not stopping the murder, and as his family slowly fell apart, Joe's anger at the real killer grew. Flash forward to now, and following a short twelve years in prison, Alistair has made a life for himself touring the world and speaking out against violence. The two men have not seen each other since, though both are haunted by their encounter on the street that day. A television program about reconciliation is bringing them back together, staging a reunion where the pair can confront what happened. The goal is to bring closure, but Joe will only be satisfied if he takes Alistair's life. The five minutes it would take to exact vengeance would be his five minutes in heaven.

It's a promising concept, but Five Minutes of Heaven doesn't build a satisfying dramatic arc out of it. The film is written by Guy Hibbert (Omagh) and directed by Oliver Hirschbiegel, who attempts to bring some of the docudrama technique from his acclaimed "last days of Hitler" biopic Downfall to this heated story. The result is middling, at best. The faux-documentary style creates a distance between the viewer and the story, one that the authors clumsily attempt to traverse via overdone voiceovers. While the conceit of Downfall was that Hirschbiegel would only tell us what could be seen, he would extrapolate no further than what could logically be known (a noble idea that, arguably, he failed at), in Five Minutes of Heaven, he tries to take us inside the head of his two protagonists, and it doesn't work.

I normally laugh at people who dole out hackneyed writerly advice like "show, don't tell," but if there was ever a time where this maxim was needed, it's Five Minutes of Heaven. The movie over explains, cutting between flashbacks and present-day sequences, layering an interior monologue on everything and, even worse, sometimes forcing the characters to explain things again out loud. There is a lot of emotions being fired up here, a lot of complex issues to tackle, but the movie never catches flame. It's like we are reading a psychological evaluation of dealing with the aftermath of violence, absent any of the drama. The first 1/3 of the movie is the killing, which is fine enough, but then the center of the film is a long set-up for the TV show, and nothing much really happens. When the men finally do confront each other, Hibbert and Hirschbiegel overcompensate for the preceding slowness by hitting the turbo boosters and the actual showdown is ridiculous. I won't give it away, but let's call it a playwright's version of two guys walking away from an explosion and not turning around to see the flames.

Credit then to the stars of the movie for making this overly intellectual exercise watchable. Both are quite good in their roles. Neeson, who has otherwise been embarrassing himself lately in garbage like Clash of the Titans and Chloe, creates a complex character, one that is pompous in his contrition while still being genuinely sorry for what he has done. It would have been easier had Alistair Little been a noble character looking to heal the wounds of others, but really, for all the fancy psychobabble he comes up with regarding what Joe needs, he's just looking for his own absolution. On his side of things, Nesbitt is excellent at navigating the various emotions his role requires. Joe's mood switches at a moment's notice, and Nesbitt makes him sympathetic, a nice guy that was pushed too far and has held on to his anger for too long. The acting is incendiary. The director tries to derail both performances by constantly flashing back to the faces of the younger actors (Mark Davison plays teenaged Alistair, Kevin O'Neill is tweenage Joe), but even such heavy handedness can't undercut the good work on display.

I don't want to give the impression that Five Minutes of Heaven is the worst movie I've seen recently or anything. It isn't, not even by a long shot. It is one of the more disappointing, though, since the story idea has so much potential and the actors prove themselves more than capable of carrying it out. Watching Five Minutes of Heaven is like sitting outside of a very good movie, catching glimpses of it through the window, but only getting the gist of what is really going on. This view from the fringes is never going to be as satisfying as getting in the middle of it and really exploring everything there is to see. 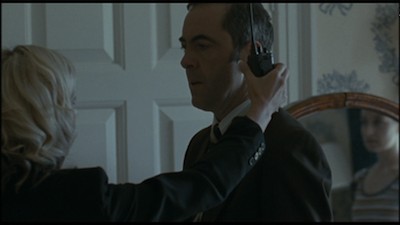 Sound:
The original soundtrack is mixed in 5.1 and has decent atmosphere, with some front and back interplay that lends to the reality of the experience. Subtitle options are Spanish and English Closed Captioning.

Extras:
The sparse extras are the film's theatrical trailer and a short (4 minutes, 35 seconds) behind-the-scenes promo.

FINAL THOUGHTS:
I don't know how a movie about anger and revenge got turned into a bloodless intellectual exercise, but that's what happened with Five Minutes of Heaven. Despite strong performances by Liam Neeson and James Nesbitt, the story of a man confronting his brother's killer after thirty years of boiling rage overdoes its back-and-forth docudrama style, and it spends too long equivocating over how the confrontation should happen. Five Minutes of Heaven interesting, but disappointing. Rent It. 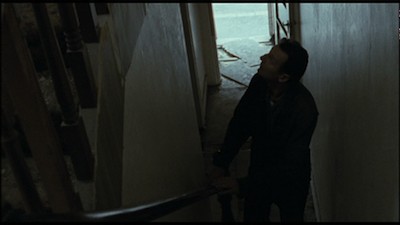