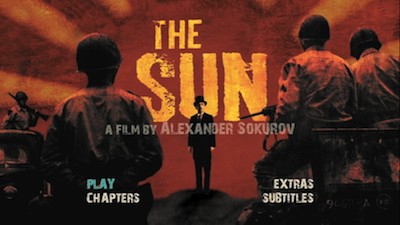 The Sun is an unconventional biopic of Emperor Hirohito, the ruling monarch of Japan during WWII. Played by actor Issei Ogata (Yi Yi), we see the leader in the final days of the conflict, exiled to the only structure of his palace left standing after U.S. bombs leveled the county. Full invasion is imminent, as is disgrace. The Japanese believed their emperors to be living embodiments of gods gracing our imperfect world. The Sun asks what happens to a god in defeat, and how does the divine cope with being exposed as all-too human.

The film begins with Hirohito's daily routine. He rises, is dressed by his valet, and goes about the mundane tasks that occupy his time. Hirohito was a marine biologist, and the building that survived the bombings was his lab. Yet, he can't focus on studying crabs, his thoughts keep drifting to the reason the war went wrong. The destruction haunts him. The emperor has vivid dreams of the Allied attacks, where the bombs and planes have been replaced by giant fish and other sea creatures swimming in the fire. Nothing makes a man seem as small as cowering in his bed following a bad dream.

The Sun is directed by Alexander Sokurov (Russian Ark, Alexandra), and it's his third portrait of a tyrannical leader in decline. I haven't seen his biographies of Hitler (Moloch) or Lenin (Taurus), but The Sun has me intrigued. In concept, it reminded me a little of Oliver Hirschbiegel dispatch from Hitler's bunker, Downfall, as both films attempt a dispassionate approach to portraying controversial, despised leaders in their final days. By opening The Sun with such banal activities, Sokurov and his writers, Yuri Arabov and Jeremy Noble, have found a quick way to show how detached from the war Hirohito really was, and also how detached from normal life. He is surrounded by servants who dote on his every move. Hirohito already senses that change is coming (his breath smells and tastes funny to him, something a god would never experience), and he is breaking traditions, trying to behave normally, to be human. He indulges in nostalgia by looking at old photos, and even dreams of more down-to-earth stars, studying the faces of Hollywood actors. 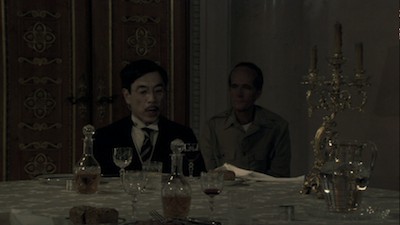 Things change when the Americans come and put the emperor under house arrest. He dresses as a Westerner (the soldiers say he looks like Charlie Chaplin) and poses for photographs. He also has meetings with General MacArthur (Robert Dawson), and the two begin to lay the groundwork for the transition of power and making the emperor seem sympathetic to outsiders. Sokurov has Dawson play MacArthur as a distracted participant, and one who is fascinated by Hirohito. It's hard to tell if he truly feels sorry for him or if he's intrigued by the opportunity to cut a "god" down to size. It's through MacArthur that Sokurov buries the question of Hirohito's war crimes. The Americans saw an easier path in making him a mouse rather than a monster.

Part of why I find it hard to read MacArthur is that Dawson isn't very good in the role. All of the scenes with English-speaking actors are awkward and stiff. The audio never quite syncs up with the images. It's not just that the mouths don't always match, but it sounds like someone other than the actors we see are speaking, as if these portions were dubbed over after the fact and from a distance, something akin to watching an old Italian movie with an international cast reciting their lines in a variety of different languages. If I wanted to give Sokurov the benefit of the doubt, the effect does end up adding a surreal kink to the story, but I doubt that is on purpose.

On the other hand, Issei Ogata turns in a fascinating performance as Hirohito. With his buck teeth and exaggerated facial tics, he lands somewhere between satirical caricature and empathetic reconstruction. Ogata's Hirohito is reserved, rarely raising his voice above a mild volume. He is also a scientist foremost, and so he is always observing, studying the situation and seeking to understand how it is going to work. In the way that he tastes his food or savors a Cuban cigar, one gets the sense that he is realizing all the things he may be allowed to try for the first time now that he is being released from the burden of power. Though he is sad for Japan, it's never clear if he is sad for himself. Rather, he seems more relieved.

Sokurov shot the film himself with a digital camera, and while this adds to the documentary-style realism in some scenes, The Sun does look unconvincing at other times. The clarity of the picture actually detracts from the believability, and computer enhancements of the backgrounds and scenery also look very fake. Again, like the odd English dialogue, whether this is a constraint of the budget or intentional is hard to say. There is more of a case to be made for an aesthetic choice in this instance, as the digital landscapes resemble Hirohito's nightmare, and so there is a kind of dreamlike dissonance when the world outside his window doesn't appear to be the world of the common man. Contrast that with the stark images of destruction Hirohito sees on the ride to visit MacArthur, the ruins framed and even cut off by the car window, and you get two different images of post-War Japan, both from Hirohito's point-of-view and neither complete.

The Sun ends without much impact. Hirohito embraces the changes that have come to him, but there are no histrionics, no crescendos, that lead him into his final transition. Instead, the closing scenes are permeated with a sallow resignation. Sokurov is taking a reductionist approach to history, making the emperor no more profound than the rather cliché haiku he struggles to write throughout the picture. Don't be surprised if the movie leaves you with one big "Huh?" It's art that takes a little pondering, the impact settles over the viewer rather than hitting all at once. That is by Sokurov's design, that in this case true historical change didn't come in a bomb blast, but through slow, sad capitulation and acceptance. 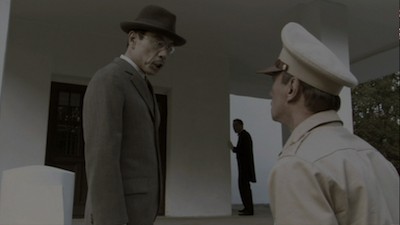 Video:
The 1.78:1 anamorphic transfer of The Sun on this Koch Lorber DVD appears to be, if not the same as the Artificial Eye release in the UK, remarkably similar. The original aspect ratio of the film was 1.85:1, so the framing is tighter than intended, but not so as you would notice. Colors are good, though a bit inky, and there are occasional compression issues. It's a slightly above average transfer, but not perfect.

Sound:
The soundtrack is in both Japanese and English and mixed in Dolby 5.1. The aural atmosphere is quite good, with lots of multi-speaker interplay. There are optional English subtitles for the Japanese portions.

Extras:
There are three extras on the disc: the theatrical trailer for The Sun, a stills gallery, and illuminating text-based notes from director Alexander Sokurov.

FINAL THOUGHTS:
Recommended. The Sun is a fascinating, puzzling portrait of Emperor Hirohito of Japan in the final days of World War II. Russian director Alexander Sokurov chooses a restrained approach, showing the ritualistic and banal activities of the monarch's day to day, and how the break from these conventions when the Americans invade also breaks the man. Issei Ogata gives a remarkable performance as the Emperor, and though some may find this odd and quiet biopic baffling, others will find that Sokurov has tucked some heavy meaning into the quiet corners of The Sun's narrative. 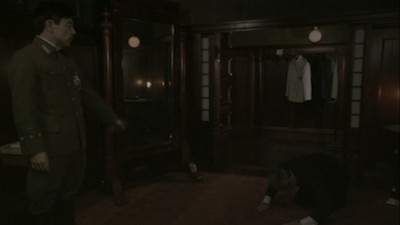