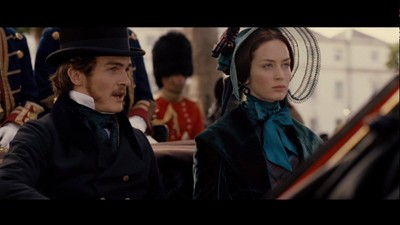 Writing about real love is hard. I'm not talking about romance, either. Romance is actually kind of easy. Get two pretty people, have them be passionate about one another, steam it up a little, and the job is halfway done. But to really see a couple fall in love is something altogether different.

The Young Victoria has a lot of things going on, it's a movie about political intrigue and one girl's growth into womanhood under extraordinary circumstances, but at the center of it, Queen Victoria and Prince Albert fall in love. That director Jean-Marc Vallée (C.R.A.Z.Y.) and writer Julian Fellowes (Gosford Park) allow that subplot to be the heart and soul of their movie without letting this historical drama turn into a full-blown romance picture is in and of itself a feat. The fact that all of The Young Victoria is as good as this one component makes it all the more impressive.

Emily Blunt leads the film as Queen Victoria, who was barely of age when she took the throne of England. She would eventually be the longest-reigning monarch in British history, and she would prove to be extremely influential on the fashions and social mores of the 19th century. The Young Victoria concerns itself with her early career, from the teenage years where various forces vied to either depower her or secure an alliance with her, the early fumblings of her regal career, and finally, stabilizing her kingdom in tandem with stabilizing her marriage to Prince Albert (Rupert Friend, The Boy in the Striped Pajamas, Cheri).

Victoria never knew her father, and so her upbringing was overseen by her mother, the Duchess of Kent, (Miranda Richardson, a.k.a. Rita Skeeter from the Harry Potter films), and her mother's affairs were controlled by the scheming Sir John Conroy (Mark Strong, also a villain recent released Sherlock Holmes travesty and in the upcoming comic-book movie Kick-Ass). The stubborn and sheltered girl won't bend to them, however, refusing to sign papers that would grant her mother power should the need arise. King William (Jim Broadbent, Moulin Rouge) is holding on just long enough to make sure Victoria gets her rightful crown, and the Duchess' brother, King Leopold of Belgium (Thomas Kretschmann, Valkyrie), thinks his niece being in charge would be better for Europe. Thus, he releases Prince Albert from his can and sends him to woo her.

The young royals hit it off very well, especially once Albert goes off his uncle's script and talks to Victoria as if she were a human being. He is sympathetic to her sheltered life, and he shares her desire to break free and be his own person. His wooing of her is postponed, unfortunately, by the intervention of Lord Melbourne (Paul Bettany, The Da Vinci Code). As Prime Minister, getting close to the new Queen can only help the liberal side of the Parliamentary aisle, something Melbourne's rivals are quick to seize on once power shifts the other way. 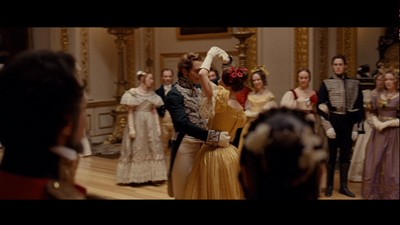 The various players in this drama regularly refer to their political lives as, "the game," and indeed, they do move around the Queen as if they were on a chessboard, circling to see who can grab her first. Seriously, it's like an episode of The Wire. Everybody's in the game, they're just playing the game, the game is the game, man. It's also really fascinating, and Vallée and Fellowes are smart not to let Victoria get lost in it. It's her story after all, and there is very little behind-closed-doors intrigue. Rather, the script keeps its attention on how it affects her, how she reacts to it and how she sometimes falters. Emily Blunt has yet to do any wrong, she's always good, but her turn as Victoria is a step up, even for her. She is the Queen from start to finish, equally as comfortable as an impetuous schoolgirl as she is a woman wrestling with tough decisions. It's a fascinating performance of a fascinating character, one who can lead the way and also follow all in the same scene. For instance, there is a wonderful bit of silent business midway through. Victoria sits on a bench with her aunt (Harriet Walters), and as a serious discussion wanes, the Queen relaxes and sits back. The aunt follows suit, but Victoria watches her out of the corner of her eye, and when she sees the older woman begin to bask in the sun, she does so, too. First she does as she pleases, then she opens her eyes to learn.

There is also the matter of the private moments between Victoria and Albert, the stolen whispers and the hidden conversations where the guard drops. Blunt makes Victoria sweet and girlish in these moments, and Rupert Friend portrays Albert as a dashing leading man held back by the restraints of proper courtly etiquette. As a result, it's the little things that make the romance sparkle, such as his secretly learning to dance or the way the two daydream about one another. Vallée doesn't settle for the staid aesthetics of your average costume drama, either, he works to bring these youthful passions and the strangeness of their surroundings to life. The way he stages their waltz, the blur of booze-filled glasses, and various other sequences give The Young Victoria an added kick you don't usually find in more serious-minded period pieces. It's a beautiful film, lovingly shot by Hagen Bogdanski (The Lives of Others), that manages to put a spotlight on the wonderful period detailing without fetishizing it or allowing the costumes and sets to upstage the actors.

By the end of The Young Victoria, all the pieces come together and the film has achieved a satisfying narrative arc. I wasn't quite sure where the story was going to end up, but Fellowes finds a transitional moment that makes sense as a capper to this portion of the Queen's life. When it was all done, I also wanted to see what's next, and wouldn't be against seeing this become a corseted franchise for Emily Blunt, a la the Elizabeth movies and Cate Blanchett. The actress certainly has the chops for it, and there is still plenty of story to tell. Though, I seriously doubt they'll ever let us in on the little secret of why a certain infamous body piercing is called a "Prince Albert".... 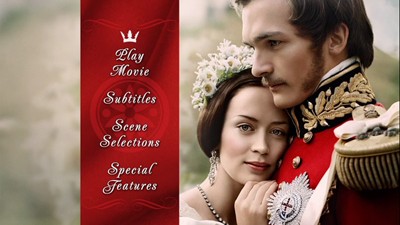 Video:
The Young Victoria was shot at a 2.35:1 aspect ratio, and the anamorphic widescreen image looks exquisite. The colors are rich, and the picture is free of digital noise or print damage.

Sound:
A 5.1 Dolby mix gives the film a full atmosphere, with nice touches in al the speakers. The music and bombast sound fantastic. Subtitles are in English, including Closed Captioning. 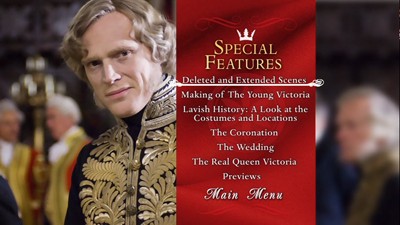 Extras:
Deleted scenes junkies will delight to nearly 22-minutes of excised and extended bits from the movie. There isn't really much that is going to knock you out, though you will see some interesting editing when Lord Melbourne puts the boot into Sir John and Victoria's mum. You also get more Jim Broadbent shouting, which is always nice. Perhaps the most substantial scene is Lady Flora Hastings (Genevieve O'Reilly) taking some deathbed digs at the teen queen.

The first of the featurettes, "Making of The Young Victoria" (5 minutes, 40 seconds), is pretty much what you expect: a promotional style rundown of the production, with some interesting tidbits on the motivation behind choosing this story to tell. Surprising to see Sarah Ferguson, Duchess of York and the original Fergie, on these; didn't realize she was a producer.

"Lavish History: A Look at the Costumes and Locations" (7:20) looks at Sandy Powell's Oscar-winning costume work and the amount of research that goes into this kind of production to get everything looking just right. Surprisingly, we don't see any design sketches, either for costumes or sets, or even any of the historical reference. Focusing on more specific aspects of the production are "The Coronation" (2:46) and "The Wedding" (2:34). The former gives time to the historical advisor brought in to give his input, while the latter is from Julian Fellowes POV, and both show on-set footage of the actual filming.

More history is explored in "The Real Queen Victoria" (7:28), featuring excerpts from Victoria's actual diary and the actors talking about their impressions (and misconceptions) of the Queen. Not exactly deep, but all right. You'd think they could have found some pre-existing documentary about the real history.

There are a bunch of previews for other Sony releases, including a couple of films in theatres. Surprisingly, no trailer for The Young Victoria. Giving us the trailer for the film we are watching is always a good way to try to trick us into thinking we're getting more extras than they really are.

FINAL THOUGHTS:
The Young Victoria is a well-told tale of the famous Queen's early years and the burgeoning romance between her and Prince Albert. Featuring a stand-out performance by Emily Blunt, Jean-Marc Vallée's film is a coming-of-age costume drama. Pretty to look at, fully engrossing, Highly Recommended.