Simpsons: The Complete Thirteenth Season, The 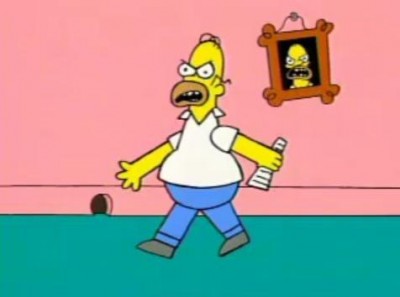 Reviewing the thirteenth season of The Simpsons, I feel more in danger of repeating myself than ever before. Last year, I wrote about the series' good but not great twelfth season, with an acute awareness that the show had begun a slow but irrevocable death spiral. Although the twelfth season remains amusing and entertaining on the whole, there's a change in feel and a reduced focus on character. Still unsure as to what I should reasonably attribute The Simpsons' unmistakable decline in overall quality - Changes in show management? New writers? The rise of Seth MacFarlane? - the thirteenth season is further proof of the regrettable change in comic tone that the series took on in the early part of the last decade. More important than the uptick in one-off jokes and shock gags is the fact that The Simpsons begins to repeat itself quite unapologetically. The thirteenth season contains a surprising number of jokes and situations recycled from earlier episodes; these aren't clever inside references for fans, either - the show's makers were simply re-using old material and hoping we wouldn't notice.

Despite several good scripts by the prolific and consistent John Swartzwelder, The Simpsons' style takes a turn into territory that is clearly - and unfortunately - influenced by Family Guy, a place where throwaway jokes lead to hyperlinked mini-scenes of the "It's like the time Yogi Berra had cocktails with Yoda" variety. It's strange to reflect on the perverse injustice of The Simpsons being so impacted by Family Guy - a show that began life as a transparent rip-off of The Simpsons, but with gross-out jokes. Both are Fox properties, which likely had something to do with it - although that doesn't explain it, exactly, because Family Guy had poor ratings in its first two seasons, after which it was temporarily cancelled by Fox. Maybe staff at The Simpsons saw Family Guy as the way of the future and consciously tried to piggyback elements of its style. The true explanation lies well outside the purview of this review, but the fact is that the influence of Family Guy is an important factor in the show's changing tone.

At the beginning of this year, Fox released The Simpsons: The Complete Twentieth Season on DVD and Blu-ray in an opportunistic attempt to capitalize upon the show's first high-definition season. In reviewing season twenty, my multi-talented colleague at DVD Talk, Jamie S. Rich, wrote a warm, honest, and very funny break-up letter to the series, bemoaning its frustrating decline in wit and invention. In a lot of ways, many of Jamie's observations apply directly in the case of the thirteenth season. The fact is, I stopped watching the show regularly around 2001, and it was my first time seeing many of these episodes. I was reminded all over again of how I felt a decade ago: that the show had grown stale, repetitive, and overly reliant upon its reputation and past brilliance.

From the vantage point of ten years on, The Simpsons' thirteenth season looks like a show caught in the midst of an uncomfortable identity crisis. It's impossible to argue with the ingenious entertainment that The Simpsons generated without exception for a good solid ten years. Any program that stays on for twenty - and almost none do - is bound to struggle with freshness. The thirteenth season offers its fair share of laughs - especially in the episodes "A Hunka Hunka Burns in Love," "She of Little Faith," and "I am Furious (Yellow)" - but our main characters no longer drive the stories the way they used to. The long and short of it is that The Simpsons remains recognizable and entertaining in the thirteenth of its (so far) 21 seasons, yet this isn't the family we fell in love with.

Fox has packaged The Complete Thirteenth Season somewhat oddly. The four discs are housed in an accordion-style set of fold-out sleeves, festooned with some very nice original artwork. But the slipcover is inside a flimsy box that, strangely, has closures on both sides. So instead of sliding the disc sleeve out of one side of the slipcover, you have to open a flap. Not a big deal - just weird.

Image
As always, the full-screen transfers of these episodes are fantastic. Bold, bright color and heavy blacks are unwaveringly clear, with no evidence of digital break-up. This is what we've come to expect from Fox's releases of The Simpsons, and they've accomplished more fine work here.

Sound
Lively Dolby Digital 5.1 surround tracks on each episode do a lot to pull us into the show. Sound design has always been a major part of the show's success, from the use of consistently hilarious sound effects to Alf Clausen's eclectic, witty score. These tracks are without exception well-mixed and enormously engaging.

Bonus Content
Once again Fox has bestowed an embarrassment of riches upon the thirteenth season with an array of features that will keep fans busy for weeks.

Each episode contains a full-length commentary track, with participants from every corner of the show's creative team, including writers, directors, animators, voice cast, and guest stars. Creator Matt Groening used to appear in almost all these tracks, but his absence from all but a few of season thirteen's episodes is conspicuous. Still, the commentaries make good listening; they tend to by funny and packed with production detail. Most episodes also feature deleted scenes, which are accessible via a branching feature.

Apart from the commentaries, the bonus features break down as follows:

Disc 1
A Token from Matt Groening (1:52)
Animation Showcase is available on "The Parent Rap," which allows the viewer to watch the episode in storyboard and/or animatic form.
Special Language Feature offers "Treehouse of Horror XII" with optional dubbed tracks in German, Czech, Japanese, or Portuguese.
Ralphisms (2:40)

Disc 3
Blame it on the Monkeys (1:40) discusses the Brazilian controversy.
The Games (8:02) appears to be a compilation of footage from different Simpsons-inspired video games over the years. Unfortunately these gameplay clips don't tell us which games we're looking at.

Disc 4
Deleted Scenes (14:41) are playable here in a big bundle, with or without commentary.
The Sweet Life of Ralph (6:11) is a short biography in clips of the beloved goofball.
Sketch Gallery II (3:10)
Commercials (2:20)

There are also a number of easter eggs, spread across all four discs.

Dating from 2001-2002, the thirteenth season of The Simpsons is funnier and more entertaining than most television comedies currently in production - including, by the way, The Simpsons! Still, long-term fans of the show will be disappointed (if they aren't already) by the show's marked decline in standards, less intelligent humor, and fewer episodes that are truly character-driven. Nonetheless, the thirteenth season has been assembled with the usual assortment of goodies and an excellent technical presentation. Recommended.