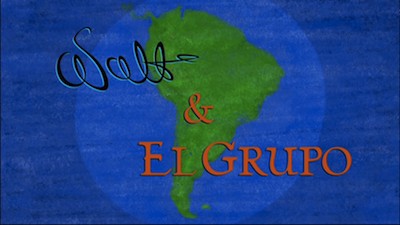 The new documentary Walt & El Grupo sets out to tell the fascinating story of how Walt Disney and a group of his artists went on a 1941 good will tour of South America on behalf of the U.S. government. It's a tale full of creative discovery and political heft, yet the documentary unfortunately eschews most of that in favor of lukewarm sentimentality.

With World War II on the horizon, Franklin Delano Roosevelt was concerned about America's security and, particularly, our Southern neighbors. This was not an unfounded fear, either, as Germany was also courting South American favor; which way the continent swayed could have made for a very different world map. So, to promote friendship, FDR exported one of the country's most beloved commodities: Walt Disney. The proposal was that the government would fund the animator's visit to Brazil, Argentina, and Chile, where he and his team, nicknamed "El Grupo," would shake hands and explore the cultures and get to know the people. Then, the White House would bankroll the making of two films, what became Saludos Amigos and The Three Caballeros.

This project came at a good time for Disney. The success of Snow White had opened up a whole new world of feature animation for the studio, but the follow-up efforts, Pinocchio and Fantasia, were experiencing difficulties due to changes in the international climate. The war in Europe meant less box office opportunities overseas, and a labor strike was slowing production. The tour of South America not only infused the studio with funds, but it got Uncle Walt away from his troubles for three months.

Walt & El Grupo is, in essence, a travelogue. Using archival footage, photographs, and new interviews with descendents of El Grupo and the people they met on their journey, the documentary traces their path along the map, including a detour to Uruguay for the premiere of Fantasia. The film is intermittently fascinating, examining the impact of Disney's arrival in each country and also using the itineraries to figure out what the group saw and did there. Unfortunately, with the actual travelers having all passed on, first-hand accounts only surface in the form of letters they sent home, here read by their children and devoid of any additional commentary from the people who wrote the individual reports. There is even a suggestion that some of the missives might have been censored before delivery, further distancing us from what went down. Thus, it is all the more frustrating that this material gets the strongest focus, and the actual creative development is given short shrift. Sure, we see some of the drawings created by the animators, but with little context in terms of the final films. We here reference to El Grupo working, but are given no insight into how the finished product may or may not have been coming together on site. Is that really less important than finding out what toys the travelers brought home for their kids?

Walt & El Grupo is directed by Theodore Thomas, son of legendary animator Frank Thomas, who was part of this expedition. This goes a long way to explaining why the juicier details are pushed aside in favor of the sappy home movie angle. Sure, the resulting film is warm and fuzzy and it advances the Disney corporate image of being one big family, but in terms of Walt & El Grupo standing alone as a feature documentary, it doesn't allow Thomas to make the grade. Really, this movie would have been better as an added feature to an updated version of the Saludos Amigos/Three Caballeros double-feature DVD the company put out several years ago. In fact, Saludos Amigos is bizarrely included here as a bonus feature itself; notably, it's the restored 1943 theatrical cut, which features Goofy smoking, a version not seen since the 1960s. This strikes me as backward. Walt & El Grupo should be the supplement.

As a stand-alone presentation, Walt & El Grupo is slow going. There is a very interesting story somewhere inside of it, but it's one that maybe needs to be made by someone not laboring under the Disney brand. Sure, the film ends with some honest mixed reactions to Saludos Amigos, but other meaty aspects of the narrative are glossed over. We aren't even given full and compelling portraits of the many creative folks who traveled with Disney. With the exception of the extraordinary Mary Blair, we don't really get fleshed-out profiles of these talented people so that we feel like we know them and understand how the trip impacted them. Walt & El Grupo is a vacation that goes on too long for it to end up going nowhere this way. It's a sad case of missed connections and boring layovers rather than the true South American adventure I was hoping for. 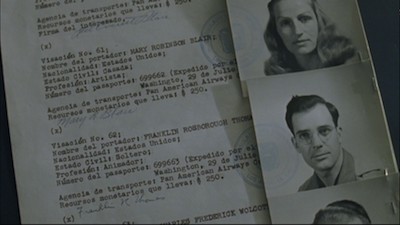 Video:
The Walt & El Grupo DVD features a 1.78:1 anamorphic widescreen transfer. The image quality if pretty good, with nicely scrubbed archival footage and decent resolution on the newer interviews. Sometimes the picture has the jagged edges of a video presentation, but it's not a persistent issue. Colors look good, and there is no dirt or scratches on the image.

Sound:
The dual-language soundtrack is mixed in 5.1 Dolby, though I didn't really notice much in terms of using the front and back speakers. This is mostly a talking heads picture with the audio sitting firmly in the middle. Music sounds good, but there is nothing exceptional here that stands out. Subtitles are available for the deaf and hearing impaired.

Extras:
For a movie that itself feels like an extended DVD bonus feature, Walt & El Grupo gets a ton of bonus supplements. Most notably, as mentioned above, you get the anthology film Saludos Amigos, restored to its original theatrical cut. Yes, once again, Goofy smokes! (Amusingly, the only reason Walt & El Grupo is rated PG is "For Historical Smoking." Yes, really. "Embarrassment" and "MPAA" should be considered synonyms. Grow up, why don't you?) 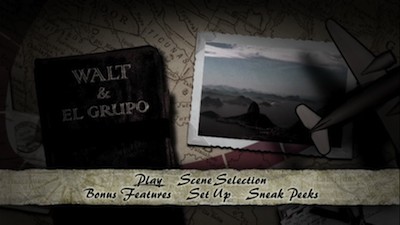 As far as going "behind the scenes" on the documentary, we get a full length audio commentary by director Theodore Thomas and historian J.B. Kaufman, who wrote a companion book to the film. The men discuss the documentary together, how they approached the narrative, and their overall impressions. It's at times more illuminating, adding further detail to specific tidbits, than the film itself. It's like a series of audio footnotes. There is also a short demonstration called "Photos in Motion," showing different techniques Thomas used to give life to the photographs in the movie.

Three deleted scenes purport to add more to the story, but they are just that, "deleted scenes" (i.e. non-essential). One titled "My Father's Generation" talks a little bit more about the boat journey and that generation's "sense of fun." Apparently, not only were they the greatest generation and more noble than the rest of us, but they knew how to have a better time, too. (Man, we suck!) "Artists and Politics" returns to Brazil to talk about the historical significance of the samba. "Home Movies for the Big Screen" just explains how the original trip was documented with 16mm cameras. The footage was to be used as internal reference but also ended up in the resulting motion pictures. Interesting tidbit: the studio in Rio that we see in Saludos didn't exist, it was created on the Disney lot.

Finally, the original theatrical trailers for Saludos Amigos and The Three Caballeros are included. The whole thing is housed in a regular DVD case with an outer slipcover. Included inside the case is a double-sided, printed timeline of the journey.

FINAL THOUGHTS:
Rent It. Man, I really had high hopes for Walt & El Grupo. As a Disney fan, I have tremendous respect for Uncle Walt's creative mind--listen to the audio meetings on the old Bambi DVD, the guy was a genius--and so I was excited by the idea of hearing about this historic Good Neighbor trip he and some of his crew made to South America just prior to World War II. Unfortunately, the documentary downplays the good stuff--the politics and social climate, the artistic process--and gives undue focus to the goopy family element. Walt & El Grupo ends up offering little insight on all fronts, never really finding its central story, and so it's slow going. Tidbits do come, and the restored Saludos Amigos should please most animation collectors, but the DVD is the wrong way around: Walt & El Grupo should have been the bonus feature, and Amigos should have taken the lead. 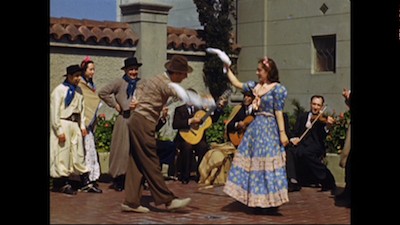