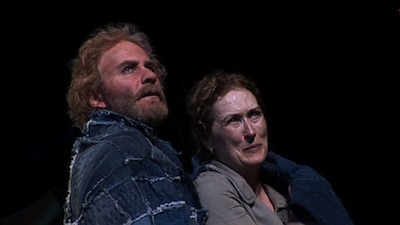 Theater of War is a movie in conflict. It tries to be many things at once, but only really succeeds at being one of those things well. The documentary, directed by John W. Walter (How to Draw a Bunny), uses a 2006 staging of the Bertolt Brecht play Mother Courage and Her Children as a springboard for exploring Brecht, the nature of political theatre, the climate of our times, and the process of staging a play all at the same time, thinking the play will tie everything together. It doesn't.

Mother Courage was first written in 1939 and was staged many times in the years that followed. Brecht had been forced to flee Germany as the Nazis took power, eventually ending up in America shortly after we entered WWII. He left America after an encounter with HUAC, which is covered extensively in Theater of War. Newsreel footage of the writer's testimony is fascinating for its apparent candor, which is promptly discredited by Brecht's daughter, who sees her father giving the performance of his life, pouring on his accent and playing his part as the dutiful immigrant. For a man who opened up the theatrical stage and advanced the notion of a theater of ideas, it makes perfect sense.

It also makes sense that Brecht would be the subject of a film like Theater of War. Dismantling the wall between audience and performer is very much in keeping with the spirit of Brecht's work. Walter shows us the cast rehearsing, using montage to illustrate the advancement of the process from one line reading to the next. This particular production was debuting a new translation of the original text by Angels in America-scribe Tony Kushner, and it starred Meryl Streep as Mother Courage and Kevin Kline as the Cook. As the work progresses, the actors and the stage crew all share their impressions of the material, while Brechtian scholars add more background.

It's the latter element that works best. Theater of War is strongest as a documentary about Bertolt Brecht. I felt more informed about the author when the movie was done, and even have an itch to go and reexamine his other work (I once reviewed Threepenny Opera for this site). I've never seen or read Mother Courage, and now would very much like to--which is one of this DVD's major downfalls. Though some of the backstage footage is interesting and the performance material intriguing, it seems a missed opportunity to not package some kind of filmed document of this particular production with the making-of documentary. It reminded me of Allan Miller's 2000 documentary The Turandot Project, about Zhang Yimou's historic staging of Puccini's opera in China. We see the efforts Yimou went through to pull it off, and we are told how important the event is, and then we see nothing of it. Granted, Walter gives us much more of Mother Courage than Miller gave us of Turandot, but it's still not enough. They've created an amazing commercial for the plays, but no way for us to see them--and neither story is that amazing that it doesn't matter. Not like, say, how involving Hearts of Darkness is even when divorced from Apocalypse Now. There just isn't that much drama.

Still, Theater of War is interesting enough, and the clips of Mother Courage are suitable to illustrate how the work thematically fits in with Brecht's life. Where Theater of War ultimately fails, however, is in making its case for the play's relevancy to our times. Though the film begins under the premise that this new adaptation is being put together as commentary on the war in Iraq, and we think some kind of argument will be made for why art and entertainment should share a dialogue with the public, those things never come. In fact, Kushner takes the wind out of those sails by insisting a play is not real protest; real protest is getting out in the streets and blocking a tank or something. Well, sure, but what about entertainment's power to inform and foment public action? Isn't art's capacity to inspire revolution what scared HUAC about Brecht in the first place?

I suppose your enjoyment of Theater of War depends on what you want out of it. It turns out I wanted more than the movie was willing to give, and though that lessened my overall reaction to Theater of War, I still liked the more extensive study of Bertolt Brecht. Theater fans may also find more in the behind-the-scenes stuff. It is interesting to see Meryl Streep put a character together, particularly as she doesn't normally like to share that part of her vocation with the audience. It services these things fine even if, as a complete movie, Theater of War doesn't quite add up. 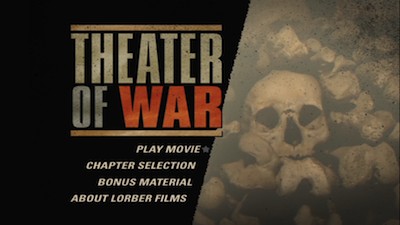 Video:
The anamorphic widescreen presentation of Theater of War is decent. The documentary appears to have largely been shot with digital cameras, and that often shows. There is quite a bit of digital interlacing and also some ghosting, and the overall resolution is soft around the edges, but I think that's more the production than it is the DVD authoring.

Sound:
The basic stereo audio mix is solid, with strong volume levels and the appropriate clarity so the talking heads can be understood.

Extras:
The sole extra on Theater of War is a commentary by director/editor John Walter and the political documentary filmmaker Michael Moore. (Walter was the editor on Moore's most recent film, the far more inspiring polemic Capitalism: A Love Story.) For many, Moore's participation will bring a particular prejudice, good or bad, to the table, but I found the conversation thoughtful and illuminating, and often more intellectually intriguing than the movie itself. Walter's intentions are explored, and some of the ideas I wish had come to the fore in the movie are given airtime.

FINAL THOUGHTS:
There is a lot of about Theater of War that I liked. I really enjoyed the biographical information on German playwright Bertolt Brecht, and I was intrigued by the backstage development of a new version of his play Mother Courage and Her Children starring Meryl Streep. I was dismayed, however, that the film did not do a better job of exploring this highly political anti-war script's relevancy to modern America, which presumably was the reason it was helmed in the first place. I was also dismayed that the DVD release didn't have a complete version of the performance, which seems to me highly essential to one's appreciation of the rest. Still, it's all worth a look at least once, so I say Rent It. 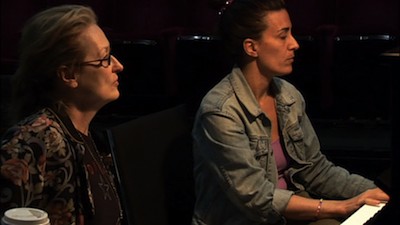