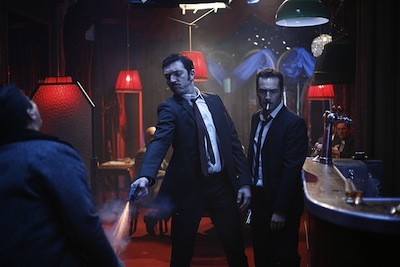 Americans may have invented the gangster picture, but the French took to it like the proverbial duck l'orange to sparkling water. As noir faded over here, it erupted on the banks of the Seine thanks to directors like expatriate Jules Dassin and homegrown-hero Jean-Pierre Melville. Though the French have yet to make their Godfather (as far as I know), Mesrine just may be their Goodfellas.

Tall praise, I know, but having just experienced the first half of this two-part movie, Mesrine: Killer Instinct, I'm feeling pretty energized in the way that only watching a bloody thriller about charismatic sociopaths can inspire.

Vincent Cassel (Ocean's Twelve, Eastern Promises) stars as Jacques Mesrine, a notorious bank robber who cut a criminal path through France and French-speaking Canada starting in the 1960s and, at least in this part, carrying on into the mid-'70s. He even went on a high speed chase through an Arizona desert, and when the cops pulled him over, he protested by claiming to be a tourist. Pretty badass, if you ask me.

Mesrine's life has been brought to the big screen by Jean-François Richet (the Assault on Precinct 13 remake), filming a script he co-wrote with Abdel Raouf Dafri (A Prophet) and based on Mesrine's memoirs. The movie begins with a short quote about the nature of truth and storytelling: this is not an exact replication of a life, but only one version of the same, make of it what you will. After a brief intro, the movie cuts to its true beginning, with Mesrine being pushed into his first direct kill as part of the French army in Algeria in the late 1950s. Killer Instinct ends in the backwoods of the Canadian wilderness, a long way away--though the journey to get there is finely tuned, concise, and unflinching.

Once Mesrine is back from Algeria, he joins a criminal gang led by Guido (Gerard Depardieu). He robs houses and banks alongside his best pal Paul (Gilles Lellouche, Paris), and when the two go on vacation to Spain, Mesrine meets and deflowers his future wife, Sofia (Elena Anaya, In the Land of Women). One prison and three kids later, Mesrine is a total failure as a father and a family man, especially as his crimes are getting wilder and more dangerous and he has made too many enemies. The man has serious anger and impulse-control issues, and he finds his perfect mate in Jeanne Schneider. She is played by Cécile De France (Russian Dolls), and she takes over Mesrine's life the moment she calls out to him at a bar. She also takes over the whole screen. I actually had to catch my breath a little when she appeared. It's rare when a character enters a movie and has the exact impact on the audience that they are supposed to have on their fellow fictional creations. Clyde has met his Bonnie. 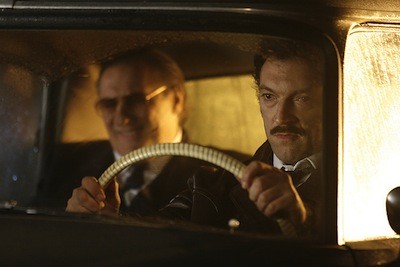 Richet pulls off multiple juggling acts in this movie, traversing the sticky morality of his story without giving short shrift to either Mesrine's charm or his truly revolting tendencies. This is, of course, the gift a great actor can give his director, and Cassel has always been a performer who can get lost in the most despicable roles. His eyes are focused like a laser-beam throughout the movie, like a gun's targeting site marking who will get hit next. Yet, try not to watch him. Try not to want to watch him. He's positively seductive to the point you may even find yourself laughing when he tells a racist joke. (I know, it's terrible, but I totally did!)

The allure of crime and its deadly consequences is a balancing act that is as old as movies, if not of storytelling itself. (For instance, just recently, I watched Josef von Sternberg walk the same tightrope in his 1927 silent picture Underworld.) The impulse to watch what we know we should not is basically the same as committing the crime itself. It's not that Mesrine doesn't know right from wrong, he just doesn't care, the wrong is too much fun. The violence in Killer Instinct--and a stabbing, in particular--made me flinch in ways I rarely do when watching movies anymore. As viewers, we can peek in on these exciting lives, but we will have to pay a toll to do so.

The director plays up the split personality through a recurring mirror motif. At first, it's just shots of Mesrine looking at himself as he contemplates a decision, but as the movie progresses, the set-ups get more complex, until we are seeing triple or quadruple images of our killer, and his visage grows more distorted and abstract. He is a man with many faces, rarely to be trusted. Taking it back to Goodfellas, he's like Ray Liotta and Joe Pesci smooshed together. No need to have the student and the teacher, Jacques Mesrine is going to educate himself.

Dafri's script has the illusion of being formless. Life has no plot, so just following Mesrine from one place to another gives Killer Instinct its structure. Dafri and Richet have trimmed out all the fat, and they often avoid more conventional scenes by skipping over some of the action. We see Mesrine reluctantly agree to a bank job, for instance, and then we jump straight to his going to jail, confirmation that his doubts were well founded. Likewise, we go from the jig being up in Canada to Jeanne and Mesrine being apprehended in America. Richet relies on our knowledge of these kinds of stories to fill in the blanks. We know what happened on that road trip, we've seen it in other movies. Why waste the time showing it again?

Mesrine: Killer Instinct is satisfying as a piece of cinema, but it's very much a part I. It even ends with a literal ellipses, as the closing titles bring us up to speed on characters that won't be back, yet must avoid telling us what happened to the main character. Most places booking Mesrine will be playing both, with the second part, Mesrine: Public Enemy #1 opening a week later. That week is going to be tortuous. If I could, I'd jump into part II right now.