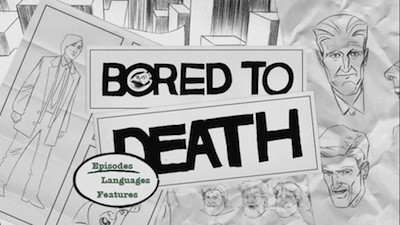 Truth is a funny thing. What happens when a novelist and memoirist creates a TV show about himself where he casts his fictional doppelganger as a struggling novelist moonlighting as an unlicensed private detective? Where does the post-modernism begin, and where does it end?

Well, the simple answer is it begins at episode one of Bored to Death: The Complete First Season, and ends hopefully somewhere far in the future, sometime just before it ceases to be entertaining.

I first became aware of Jonathan Ames when I was taken to a reading of his at Powell's Books here in Portland. Ames was promoting his then-new novel Wake Up, Sir! but also gave a fairly good rundown of who he was. Most of his books apparently feature some fictionalized version of himself, and it makes sense once you've seen the guy. He is, as they say, a character. Tall, gangly, compulsively honest, and self-deprecating, Ames and his art are interchangeable. Anyone who left that reading without buying a book either wasn't paying attention or has no sense of humor and is immune to joy and laughter.

For Bored to Death, Jason Schwartzman assumes the Jonathan Ames role. It's an amusing bit of casting when you consider whom Schwartzman is playing, and it illustrates just how far off from reality this televised lark is prepared to go. Schwartzman is short, dark, and a bit of a trickster. He takes over the Ames persona on the author's worst day. His girlfriend (the fetching Olivia Thirlby) is leaving him, insisting that Jonathan drinks too much and smokes too much marijuana. Both fair assessments, but Jonathan tried to change. He switched to only white wine. Doesn't that count for something?

Ames is frustrated in love and life both. His first novel was a decent success, but his second--one man's comedic experience trying to screw his way through the kama sutra--just won't happen. Jonathan seeks distraction. He chats with his best friend Ray (Zach Galifianakis), but the cartoonist is too hung up on his own inability to get sex from his long-term girlfriend (Heather Burns) to be much help. (Ray is another twist on the truth, based on comics artist Dean Haspiel, who created the graphic novel The Alcoholic with Ames, and who provided the Emmy-Winning title animation and all of Ray's drawings for the show.) Jonathan's occasional boss, George Christopher (a killer Ted Danson), editor of men's magazine Edition, tries to keep his pal busy. George is a partier that is up for anything--whenever he hears that someone else is having a good time or getting something cool, he quickly chimes in with a childish, "I want that"--but he is more of a chaos bringer than a stabilizer. 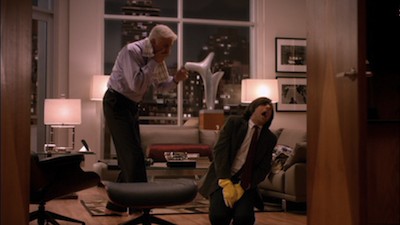 It's when Jonathan stumbles on a paperback copy of Raymond Chandler's Farewell, My Lovely that the lonely scribe gets the idea of putting up an ad on Craigslist advertising himself as a private detective who can help solve people's problems. Perhaps it will give him inspiration, perhaps not--but it will definitely give him something to do. (I kept hoping there would be a reference somewhere in here to my favorite radio serial from the 1940s, Box 13, starring Alan Ladd as an author who takes personal cases as grist for his pulp fiction; alas, none came.) Pretty quickly, Jonathan gets his first case: finding a girl's missing sister. Then a second. Another woman (Kristen Wiig, looking stunning in the classic garb of a hot female client) hires Jonathan to find out if her boyfriend is cheating on her. This time, Jonathan's path crosses with his ex-girlfriend's, and the formula takes hold. These cases become extensions of Jonathan's personal struggles, in how he seeks to redefine himself. Thematically, the show explores the idea that though Jonathan Ames may desire to restore his own love, he appears destined to solve the romance problems of everyone else first.

When I first watched Bored to Death as it was being broadcast, I thought it took a little while to find its voice (indeed, there appeared to be some episode shuffling to hustle the story along, judging by Schwartzman's changes in hair). I didn't have that problem at all while shotgunning the season a second time on DVD. I was hooked from the get-go and devoured the entire first disc in one go. The Complete First Season has eight half-hour episodes spread across two DVDs, and though there is not a complicated plot driving the overall series, the show does build one episode to the next, letting the characters and their lives develop. George and Ray aren't just supporting roles, but they are integral to each installment. Of course, the brilliant casting helps. Galifianakis doesn't fall back on any of his regular quirks, he lets Ray be Ray and shows much more range than he has being the oddball in movies like The Hangover and Dinner for Schmucks. For his part, Danson very nearly runs away with the whole thing. The actor appears to be having the time of his life, playing the magazine magnate with the exact gung-ho spirit George exhibits himself. 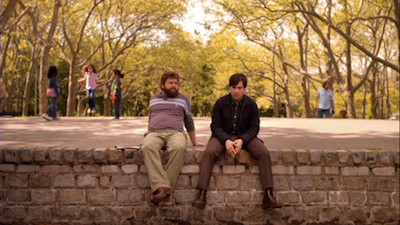 Not that Jason Schwartzman gets lost in the midst of his co-stars. The actor has been on a real streak, refining his persona over the last several years with parts in The Darjeeling Limited and Scott Pilgrim vs. the Universe. He's matured as a screen presence, and the Jonathan Ames role suits him perfectly. It gives him the ability to tweak the neurotic gestures that have become his stock in trade, but also to show how charming he is as a comedic leading man. He more than handles the ludicrous plots--for example, in episode three, he accidentally hooks up with a minor and loses a script he is supposed to rewrite for director Jim Jarmusch (playing himself, and adding to the New York flavor of the series)--and makes them seem all the more believable. In another episode, he gets tangled with skateboard hooligans while trying to impress a vegan single mom, and his failed chivalry is adorably sad.

Parker Posey plays the mom. She is just one of the great guest stars that round out the program. In addition to her, Jarmusch, and Wiig, Bored to Death also features appearances from Patton Oswalt, Romany Malco, Samantha Bee, and Sarah Vowell. Former SNL-cast member Jenny Slate is in two episodes as a potential love interest, Bebe Neuwirth pops up more than once as Jonathan's literary agent, and Oliver Platt and John Hodgman show up over several episodes as a rival magazine editor and a literary critic. The seasons ends with a grudge boxing match between them and George and Jonathan, the culmination of the clash of erudite literary culture and rampant hipsterism that runs through Bored to Death. It's a great way to finish this arc, with all the characters showing more about their humanity by how they act in the ring. (The second disc has been building to this point since episode 5, as the detective plots got more cogent and George and Ray got more involved in that side of Jonathan's life.) In a way, Bored to Death is like a male Sex & the City, a New York story slightly above the mainstream, replacing the gross narcissism with anxiety and hedonism. And also, much better written.

That's because the talent behind the camera is as strong as the talent in front. Ames had a hand in writing all eight of the scripts, and veteran television and movie directors like Paul Feig (Arrested Development, The Office), Alan Taylor (The Sopranos, Mad Men), Michael Lehmann (Heathers), and Adam Bernstein (Breaking Bad) helm most of the episodes. Bored to Death is a good-looking show that moves fast and puts the characters and their city ahead of everything else. Not that there aren't occasional touches of visual brilliance. Jim Jarmusch circling Schwartzman on a bicycle in a huge empty loft immediately comes to mind. Weird and dizzying and altogether perfect. 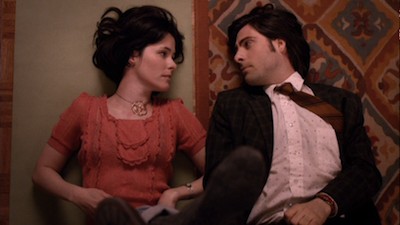 Video:
Bored to Death was shot in widescreen and comes to DVD as an anamorphic widescreen transfer that is basically unremarkable but fine. It doesn't strike me as being altogether different than the broadcast quality, though there is some haziness to the image and the darker scenes are not always as well rendered as they should be.

Sound:
The shows have been mixed in 5.1, and there is a pretty good balance. Not a ton of jumping around in your speakers, but the dialogue comes through strong.

A French dub is also mixed in 5.1, while a Spanish version is mixed in 2.0. There are subtitles available in all three languages.

Extras:
The two-disc set of Bored to Death: The Complete First Season is nicely packaged in a foldable book featuring plastic trays for the discs and an outer slipcover. The interior has a handy episode guide with titles, summaries, and creative credits--much more handy than the on-disc series guide. 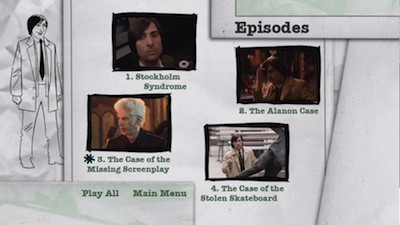 Both DVDs have two audio commentaries and two deleted scenes each. Three of the four commentaries feature Ames, Schwartzman, and the director of the particular episode; the last one replaces the director with Ted Danson. These are sly and funny tracks, displaying good camaraderie between the participants. The deleted scenes are mostly inconsequential. The bit for episode 4 is interesting because it shows a completely different take on a scene that was restaged for the final product, and a bit attached to episode 8 will be of particular note to Oliver Platt fans.

DVD 2 has a couple more extras. The near 20-minute "The Making of Bored to Death" offers no surprises to DVD veterans. More interesting is the 12-and-a-half minute "Jonathan Ames's Brooklyn," with Ames and Schwartzman taking the audience on a tour of the show's locations.

FINAL THOUGHTS:
Highly Recommended. Bored to Death: The Complete First Season is yet another big winner from HBO. This humorous take on the private detective genre melds Philip Marlowe with The New Yorker, as author Jonathan Ames creates a highly literate and wonderfully indulgent playground. Starring Jason Schwartzman and featuring knock-out supporting performances from Ted Danson and Zach Galifianakis, Bored to Death is a quirky delight. 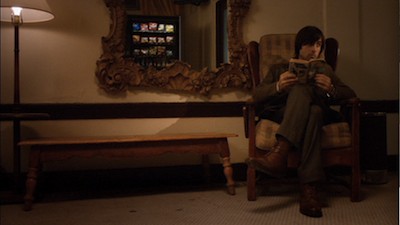