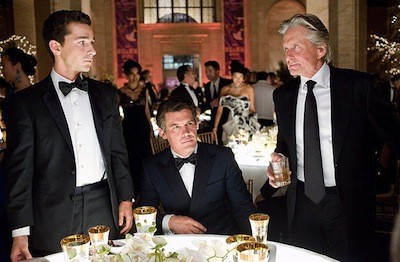 In preparation for seeing Wall Street: Money Never Sleeps, I decided to watch the original 1987 Wall Street again. It's been at least twenty years since I last saw it, and it is still surprisingly potent. Oliver Stone's cautionary tale of the temptations of men whose only commodity is the money they trade shook the pillars of American capitalism at a time when the working man was starting to be chased out of the temple. Its main villain, Gordon Gekko, famously stated that "Greed...is good," and despite the fact that he loses, his bull-market cojones entered the cultural lexicon. You get the sense that some people don't realize that the message was "you don't want to be him," not "just don't get caught."

Gekko's crimes, however, seem positively quaint compared to the financial shenanigans that have gone on in this cold new century. Time for a resurrection of the franchise!

Michael Douglas returns to the role that earned him an Oscar. Money Never Sleeps opens with him being released from jail, where he has served nearly a decade for insider trading and other malfeasance. The life he once led has now changed. Profits are bigger, the system more twisted, and the stock market is global and mobile (not unlike, say, the bloated movie industry). The trading floor belongs to young bucks like Jacob Moore (Shia LaBeouf, Transformers), guys who can somehow reconcile their flashy lifestyle with new world ethics. Jacob is investing in the future of green energy, taking his Wall Street earnings and rolling them into laser fusion development. He's also dating a left-wing blogger who doesn't quite share his politics, but somehow copes. Years of being Gordon Gekko's daughter maybe served as training. Winnie (Carey Mulligan from An Education) wants nothing to do with her father. The family fell apart when he was sent down. She's far too aware of the manipulative prick he can be.

Trouble arises when Jacob reaches out to Gordon, believing his outsider's perspective has given the ex-con the ability to see answers the insiders cannot. It's 2008 and the subprime scandals and other financial meltdowns are occurring on a near daily basis. Jacob's firm is mired in the mess, and when his mentor (Frank Langella, Starting out in the Evening) is caught in the teeth of his rival (Josh Brolin, No Country for Old Men), Jacob wants revenge. Gordon offers to help, but for a trade: he wants back in his daughter's life.

What follows is a complicated series of schemes, deals, heartfelt confessions, and moral quandaries. How far is Jacob prepared to go to get what he wants? At one point, Gordon points out to him that most Wall Street guys are gamblers, and there is an addiction at work here: the highs of a win followed by the lows of a loss, and the traders keep chasing after the bad money to get back on top. Stone and his screenwriters, Allan Loeb (21) and Stephen Schiff (The Deep End of the Ocean), work hard to both recreate the tragic arc of the previous movie and to make it work under modern conditions. Stone employs a lot of stylistic flourishes to show the fast pace of technology. There are split screens within split screens, stock tickers super-imposed over cities, computer graphics illustrating different structures and strategies. He also deals in some old fashioned symbolism, though that doesn't work nearly as well. Images of bubbles floating into the sky and dominoes falling come off as too old fashioned, and he drops the David Byrne and Brian Eno songs he snagged for the film into scenes where the literal meaning of the lyrics cheapens their impact. 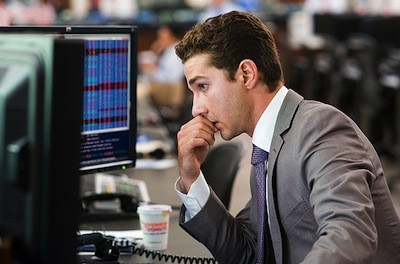 Still, it's kind of amazing that Stone is able to sell the ins and outs of the stock market and keep most of it fairly interesting. There are times when the acronyms and the flow of who borrowed what from whom and why sounds like so much gobbledygook, but in those instances, he keeps his actors moving. They only ever settle down and talk when they are in deep, deep trouble. (There are two boardroom scenes at the Federal Reserve.) Gordon Gekko delivers most of the economics lessons. Money Never Sleeps reimagines him as a kind of Keyser Söze, and we're never quite sure of when he's being honest and when he's manipulating everything to go his way. Michael Douglas doesn't quite have the same verve he had back in the day, but he's still got a way with words. He's like E.F. Hutton: when he talks, you want to listen. This is good for LeBeouf, who is best when he's relegated to the reactive role. As an actor, he's really only got two speeds: smug and intense. He's good at both, though I was getting kind of sick of his blank-eyed speechifying by the time the movie was through. The boy gets his hackles raised a lot!

Josh Brolin's Bretton James is more the active villain in the second Wall Street. He is, as they call him, the "moral hazard"--the guy who takes other people's money and plays with it, regardless of consequence. He has no responsibility, he will get bailed out by the government and will even bet on the failure of the junk paper he peddles. Brolin continues to surprise and impress. Bretton James is slimy and charismatic, similar to the actor's Dan White character in Milk but with a little George W. Bush self-belief, too. (Brolin played the President in Stone's last fiction film, W.) He serves the same purpose as the Terrence Stamp character in the first Wall Street in that he gives Gekko and his young protégé a foe in common. He also replaces Gekko as the man to hate, and the movie is at its best when it focuses on these plot elements.

Unfortunately, Brolin gets sidelined midway through Money Never Sleeps, and the movie begins to get bogged down in family melodrama. Again, this is not dissimilar to the original Wall Street, the connections of a working class father and his son were integral to the narrative, with the father representing the moral compass of Main Street. Money Never Sleep's young romance and father/daughter entanglements, on the other hand, come off as hackneyed and uninspired. Worse, when this stuff takes over the movie's final act, Money Never Sleep becomes sappy in all the wrong ways.

Oliver Stone has said that making Nixon and W. caused him to feel sympathy for men he otherwise reviled, and clearly the same thing has happened here. It doesn't feel right for Gordon Gekko to be offered any forgiveness or redemption. Is Oliver Stone going soft in his old age, and so he's making an old man's movie where the white-haired rascal is given a pass? Or is he just trying to inject a little hope into a world weary from home foreclosures and unemployment? Because whatever it is, it isn't satisfying. In Wall Street, Charlie Sheen's Bud Foxx had to make hard choices that would likely impact him for the rest of his life; in Wall Street: Money Never Sleeps, the hardest thing is having to say you're sorry.

What this leaves us with is a movie that is pretty good for the bulk of its running time, but that then takes a big dump before it gets to where it's supposed to go. It's disappointing, though it doesn't ruin Money Never Sleeps completely. No film executed with this much skill can be entirely dismissed. Rather, it just feels like a missed opportunity. Stone had the chance to rally the troops. He could have even wagged his finger at us and said he told us so, he warned us about guys like Bernie Madoff a long time ago. Instead, Wall Street: Money Never Sleeps, the would-be $70 million dollar treatise on the dangers of corporate excess, throws a party for itself. Mmmm, okay, lesson learned, I guess. 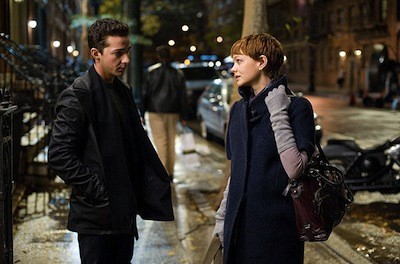