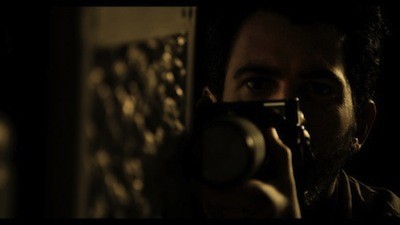 As far as made-up jobs go, Theo's is a good one. The NYC photographer, played with an appropriately frustrating inner-mania by Chris Messina (Greenberg), has an alter-ego as "Gumshoot." The name riffs on the old-school nickname for private detectives, and when he is working in this role, Theo stalks his customers the way a real gumshoe would tail a cheating wife or murderous husband. The subjects have hired him to take photos of their lives, but only when they aren't looking. The image they get is the one they never see, and if he does his job right, they never see Theo either.

When Theo isn't gumshooting, he's photographing couples on their way to the altar. It's a far more boring way to make a living, and since Theo is engaged to be married himself, each session is basically his future staring him in the face. Thus, the central question of Monogamy: is Theo giving up a life of sex and misadventure to settle down into a dull reality of conubial disharmony with one woman?

Honestly, things don't look that bad for Theo, but then, Monogamy wouldn't be much of a movie if they did. His fiancée is Nat (Rashida Jones from Parks and Recreation), a stable and fairly understanding musician whom he already lives with, so, arguably, choosing the font on the wedding invitations is just a formality. What sets Theo off on his quest of indecision is a new Gumshoot job. A mysterious woman known only as Subgirl (Meital Dohan, familiar as the crazy Israeli soldier from season 2 of Weeds) has contracted Theo to take pictures of her in the park. He's supposed to look for her by the tennis courts, she'll be wearing the short-skirted tennis uniform--only she's not there to play tennis. Instead, Subgirl sits on the park bench and masturbates in public. Theo is surprised by this, as anyone would be. He quickly becomes obsessed with Subgirl, scouring every photo for new details as to her identity. More jobs follow, and they get increasingly sexual, and Theo begins to abandon his reality in pursuit of fantasy. 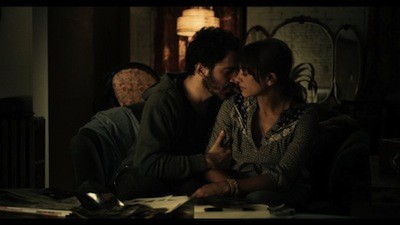 The first movie that came to mind when watching Monogamy was Michelangelo Antonioni's fantastic 1966 film Blow-Up, in which David Hemmings plays a photographer who accidentally snapped a murder scene. He keeps enlarging the image until he can see everything that is there to see. Co-writer and director Dana Adam Shapiro, who previously directed the documentary Murderball, has another reference in mind: Francis Ford Coppola's paranoid 1974 thriller The Conversation. Shapiro even has one of his characters briefly mention it, noting how, in that movie, the protagonist's obsession with the secrets buried on an audio tape lead to madness.

The difference here is that Theo isn't looking for the solution to a murder mystery, he's looking to solve a personal crisis. The thrill of seeing Subgirl's exhibitionism uncorks something in Theo. His detective work leads him to believe that she is really married, as is one of her sex partners. What is so unfulfilling about marriage that it drives people into the streets to get a little side action?

Monogamy is shot with the immediacy of a good documentary, with a loose performance style that isn't exactly mumblecore, but does mimic a certain unrestrained indie style that has begun to dominate the age of digital filmmaking. At times, Shapiro and cinematographer Doug Emmett shoot Monogamy as if they were spying on Theo as much as he is spying on his clients. There is a cramped spontaneity to how the film unfolds and to the way the actors perform that suggests improvisation. There are sequences when one can feel the guiding hands of the writers (Evan M. Wiener is also credited on the screenplay), particularly when Theo gets together with his guy pals. Their characters and dialogue kowtow to what is expected from these types of stories--one is a single father stuck with a crazy ex-wife, the other a henpecked husband who is losing himself through therapy, compromise, and wardrobe malfunctions. At other times, the material goes raw and one suspects the actors have gone off script, or at least get better guidance from it, because these scenes are brutally fresh and original. Both Chris Messina and Rashida Jones are very good at doling out the pain and heartbreak. It's a credit to both that you hate him so much and you feel so sorry for her. They are difficult people grappling with a difficult situation.

There is a little to gripe about in Monogamy's resolution. Any moviegoer who stops for a second and gives it half-a-thought is going to be able to guess what Theo will eventually discover about Subgirl. That, thankfully, doesn't really lessen the impact, and Shapiro is smart enough to leave his audience with a closing scene that is open to interpretation. It hints that maybe the couple goes one way, but what you end up deciding likely depends on your own cynicism. Monogamy is an impressively assured debut, and Shapiro makes the transition from documentary to fiction without much struggle. Now it's just a question of whether he'll stick with either approach, or if he'll keep playing the field.