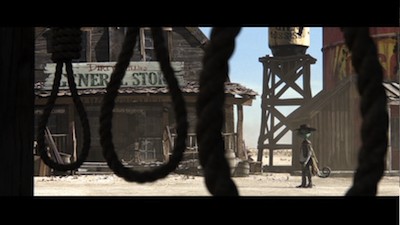 Live-action director Gore Verbinski steps away from the Ring and Pirates of the Caribbean franchises for his first computer animated feature, Rango. This anthropomorphic western has an odd swagger, mashing up dark tones with cartoon adventure, shoving slapstick over into real violence, making for a strange entry in the recent spate of digital family fare. It's not entirely successful--the whimsy can be forced, the color palette borders on the oppressive--but it's still pretty damn good.

Johnny Depp leads the cast of brilliant voice actors as Rango, the titular chameleon who, at the start of the picture, is a sheltered pet dreaming of big adventure. A freak accident leaves him stranded in the desert, where a wise armadillo (Alfred Molina) advises him to follow his shadow (an apt metaphor) and head into the horizon and search for the Spirit of the West (a real thing, voiced appropriately by Timothy Olyphant). Rango's wanderings land him in the town of Dirt, an outpost on the non-civilized side of the highway, where a variety of desert animals struggle to survive in the dust and heat. The spigot where their water comes from has recently dried up, and a lady lizard by the name of Beans (Isla Fisher) thinks a conspiracy is afoot. She is fighting to save her family land from the greedy mayor (Ned Beatty), and when natural predators (Bill Nighy as a particularly scary rattlesnake) and water thieves (Harry Dean Stanton leads an army of moles) threaten Dirt further, Rango's tall tales land him in the role of sheriff. 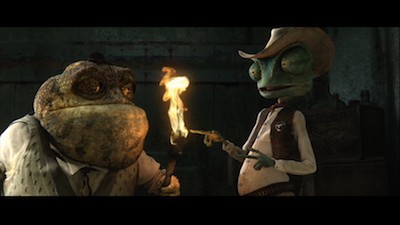 The story for Rango is credited to Verbinski, James Ward Byrkit, and John Logan (The Aviator, The Last Samurai), with Logan typing the script. In terms of plot, it's fairly standard for a cowboy hero's journey: Rango's big mouth floats him for a while, and happenstance allows him to back up his inventions, but when the larger conspiracy is uncovered and his mettle is tested, he has to put up or shut up. Depp plays the Hawaiian-shirted reptile as well meaning and dim, a fast-talking nice guy who only knows the world based on movies glimpsed through the glass of his previous home. Logan and Verbinski riff on this a little, though not enough. Granted, too many pop culture nods get annoying really fast (how do you people sit through Shrek movies?), but Rango's meta feels underdeveloped. Though nods to Depp's role in Fear & Loathing in Las Vegas and Leone's "Man with No Name" trilogy are quite funny (and Ned Beatty's use of the word "deliverance" can't be a coincidence), they come off more like asides than part of a planned comedic scheme. Rango never really figures out that his beloved fiction has become real. Likewise, his surreal visions are beautifully constructed and the dreamy designs are fantastically inventive, but they tend to be story crutches, coming when it's convenient without being integrated into the greater narrative.

Which is all stuff that could have been corrected with a little fine-tuning. (I never saw the theatrical cut, so not sure how much of the extended version fixes that; there is only four minutes difference, so it can't be much. Both versions are included here.) Most of the rest of Rango is good fun, with the action sequences being particularly thrilling. A canyon chase soundtracked by a hillbilly "Ride of the Valkyries" and the climactic showdown make full use of the possibilities of CGI, twisting and turning through the complicated landscapes. The look of Rango is quite impressive, as dusty and dirty as an episode of Deadwood, and as bleached by the heat as any post-apocalyptic scorcher where water is a precious commodity. At times, the preponderance of brown can be overwhelming, but you can particularly see the influence of cinematographer Roger Deakins (the True Grit cameraman gets at visual consultant credit) in the use of light. The ever-present sun defines the shadows, they aren't just there to look cool (no pun intended).

Regardless of its faults, Rango is a nice surprise. It's a pleasant step away from the noisy kiddie fair that the non-Pixar studios peddling computer animation usually dabble in. If anything, it could have gone further into its more grown-up themes and really played around with genre conventions, giving us a deeper and more complex remodel of the horse opera. Instead, it's a pleasing diversion with some great action, and a light dusting of romance and humor. It's an impressive one-off. Now let's just hope the studio doesn't pull in a bunch of second-stringers for endless sequels and ruin it. 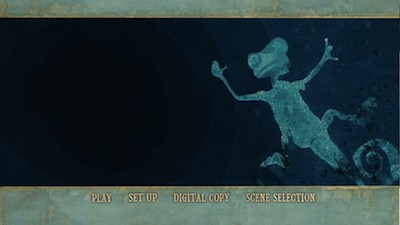 Video:
It would be tough to exaggerate how good Rango's image quality is. The 1080p transfer is a wonder to behold. Colors are alive and dazzling, blacks are deep and immersive, and the resolution is sharp enough to cut yourself on. In fact, it's almost too good, there are a couple of times when the CGI loses a small amount of its illusion because the image is so clear (the rattlesnake, for instance, is a pretty wondrous construction of moving scales, but in close-up, when the scales are visible next to the character's realistically rendered eyes, you can kind of see the digital effects at work). Few films can boast such a complaint, though. Better to look too good than not of sufficient quality. Consider Rango the BD to beat in the future.

Sound:
The expected lossless 5.1 DTS-HD MA track delivers the expected punch, with lots going on in all the speakers. Big effects boom and rattle the walls, but the quiet and subtle moments also get proper ambience. Dialogue is appropriately centered, while Hans Zimmer's music is given the needed heft where necessary. The Rango BD really delivers the full home video experience. You will feel like you are sitting in the center seat of a high-end movie theater.

Alternate audio is available, with the French, Spanish, and Portuguese dubs all getting a full 5.1 treatment. Subtitle options are offered in all four languages, with dual English tracks, one standard and one for the deaf and hearing impaired.

Audio options on the bonus disc are slightly downgraded, with 5.1 English for the main soundtrack, and all the subtitles, but no alternate dubs.

Extras:
Rango is a two-disc package with a main Blu-Ray and a second DVD featuring the theatrical cut of the movie along with access to a digital copy. The packaging is a standard Blu-Ray case, and there are a couple of paper inserts explaining how to get the digital copy, advertising a special Rango poster deal, and other promotions.

As mentioned, there are two cuts of the film on the BD, giving an added four minutes in the extended version. The audio commentary is only presented on the extended re-edit, and it features Verbinski and Byrkit alongside production designer Mark "Crash" McCreery, animation director Hal Hickel, and visual effects supervisor Tim Alexander. The track's focus tends to be on the construction of the movie, including story development and employing the technology to make a cartoon like Rango. Between this and the nearly 50-minute behind-the-scenes "Breaking the Rules: Making Animation History", Rango fans can get a full picture of how the movie grew into what it is. Despite the self-serving title on the featurette, there is a fair amount of candid discussion here and also lots of great art to be peeped at.

Ten deleted scenes (about eight-and-a-half minutes) are fun, though mostly insubstantial line trimmings and not actually full scenes. This is where you'll find the touted "never-before-seen ending." It is nearly 3 minutes long and serves as a coda, showing the townspeople heading into a new direction. It's a smart cut. It would have concluded things on the wrong note.

When watching the theatrical version, you can choose to watch the storyboard reel picture-in-picture and compare the layout to the finished product. Another more interactive feature is the "A Field Trip to Dirt" extra, which is a virtual tour of the fictional town, with character profiles and the like. Similarly, the twenty-minute "Real Creatures of Dirt" shows the actual animals that the characters are based on. This feature tends to skew younger.

Extras are in HD.

FINAL THOUGHTS:
Recommended. Rango is a CGI spaghetti Western starring a Johnny Depp-voiced chameleon who starts out pretending to be a sheriff, and then actually has to be one to defend the water-deprived desert town he finds himself in. Working with darker hues than most animated features these days, the movie blends parody and violence into a fairly standard but super entertaining story. The art direction and animation is wonderful, and the Blu-Ray presentation is the best the technology has to offer, even if the movie itself isn't perfect. 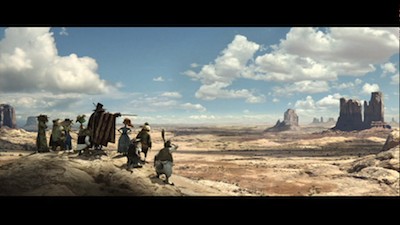