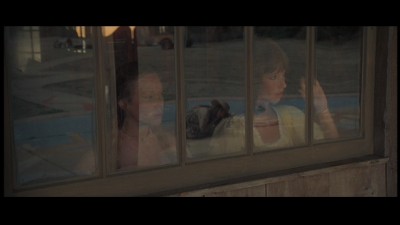 Please Note: The screen captures used here are from the standard-definition DVD released in 2004, not from the Blu-ray edition under review.

I should confess up front: One possible reason that Robert Altman's 3 Women is easily my favorite by the late, sometimes great American director is that I am no across-the-board fan or slavish devotee to his work, and 3 Women is an atypical film in his oeuvre (which already has its share of films that could be so described). I frankly find M*A*S*H* sophomoric; I think Magnolia improves on Short Cuts (though I love them both); and, as much as I enjoy Nashville, I still prefer McCabe & Mrs. Miller or The Long Goodbye. I liken Altman to another intermittently great American auteur, Brian DePalma (Altman's aesthetic opposite in many ways) in that one has to admire the stubbornly personal vision and style they gamely, almost recklessly bring to each and every project. That means careers littered with plenty of valleys--half-baked hybrids and empty exercises, and never a guarantee of artistic success (but then again, what is?). When the project and the sensibility hit it off and ignite, however, you get a pure rush of inimitable cinematic genius. In Altman's filmography, 3 Women is the most astonishing, exhilarating occurrence of that kind of fortunate coincidence. 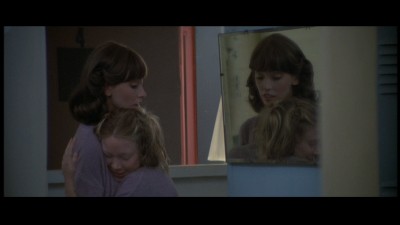 Altman perennial Shelley Duvall (The Shining) plays Millie Lammoreaux, a low-ranked, low-paid aide at a sort of physical therapy spa in a rundown California desert town. As the film begins, she is being observed in her swimming pool therapy instruction by Pinky Rose (Sissy Spacek, Carrie), a childlike young woman and new hire who is to be placed under Millie's tutelage. Pinky is excessively in thrall to Millie, whose chipper air of overconfident, pettily perfectionistic, Good Housekeeping Seal of Approval-seeking authority (especially in all matters pertaining to easy-cook recipes and the latest word from the ladies' magazines) is lost on everyone else around them; Millie is often to be seen trailing after coworkers and flirting with any eligible man, but everyone more and more blatantly ignores her, to the point where one might wonder if Millie is an apparition visible and audible only to Pinky. Pinky has just drifted into town from Texas (also Millie's home state) and is crashing at a fleabag hotel; when she discovers that Millie is looking for a roommate to split the rent on her apartment in a "singles building" called the Purple Sage Apartments, Pinky proves more than eager to fill the vacancy. 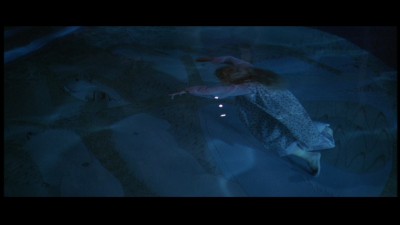 It is when Millie takes Pinky to her favorite hangout, Dodge City--a bar that was formerly a decrepit, abandoned, cluttered Wild-West tourist attraction--that we first encounter Willie (Janice Rule, Missing) and Edgar (Robert Fortier), the couple that run the joint and also happen to be the landlords of the Purple Sage Apartments. Edgar, a former cowboy stunt double on a TV program, and Willie--a near-mute, pregnant artist with a penchant for painting creepy, quasi-Southwestern Native American murals featuring half-reptile, half-human figures, such as the one that graces the Purple Sage's courtyard swimming pool--are overtly bizarre, surreal characters approached by Altman and played by the actors with a disconcertingly breezy naturalism (a trick for discomfiting us that David Lynch must have picked up on at some point). Ditto for Dodge City itself, with its shooting range and apparently permanent, anonymous gang of dirt bike riders out back. 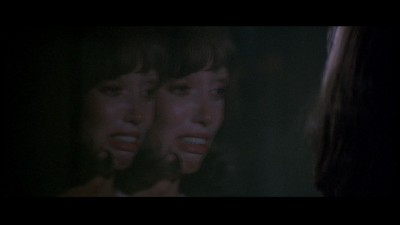 Once Millie and Pinky start living together, their personalities gradually begin to clash and impinge on each other; it is as if Pinky is a needy child, Millie an indifferent and reluctant mother. When this subterranean conflict comes to a head (with Pinky making a precipitate, suicidal gesture in response to Millie's dalliance with Edgar, and Millie's consequent guilt and obligation to Pinky), the markers defining and holding in place individual identity and personality are destabilized, blurring the people Millie and Pinky thought they were or aspired to be, with the mysterious Willie hovering around the edges of their experience as their obscurely defined counterpart (and third woman of the title), and the outcome of her pregnancy bringing the film to its fascinating, opaque (anti)climax. 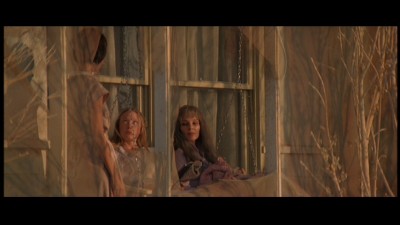 In theme and in story, 3 Women lifts liberally from Bergman's Persona (and has identity-disrupting cinematic cousins at least as far back as Vertigo and as recent as Mulholland Drive), but the particular dream/nightmare of this film, with its peculiar mélange of archetypes, could only have emerged from the American subconscious. And these archetypes--Duvall's prim, pliantly consumerist, dressed-for-success Millie; Spacek's Coke-sipping, giggly, untamed -woman-child Pinky--and their permutations are embodied with a tremendous originality, verve, and insight by the two leads. Spacek has the showier role and is, indeed, impressive in it; but Duvall has never been better, proving herself a consummate comedienne as she portrays Millie and her faith in a higher, prepared food and magazine tip-based standard of living, her performance adding an unexpected playfulness that somehow only deepens the film's increasing disorientation and menace. As Millie and Pinky go through the ecstasies and dangers of wanting to be and imagining oneself as someone else--someone "better"--Altman, aided by cinematographer Chuck Rosher's rendering of that still, bright desert light as the perfect dream environment, masterfully places us in their world of vast, arid spaces and a yellow-and-purple-colored version of civilization where the very new and the very primitive coexist with the utmost uneasiness. Altman's signature visual style has never matched the story he's telling more exactly than it does here; his restless, floating, woozily wandering camera, which always seems about to reveal something unexpected outside of the frame, is the perfect mind's-eye with which to record and present to us 3 Women's endlessly intriguing, perpetually shifting waking dream. 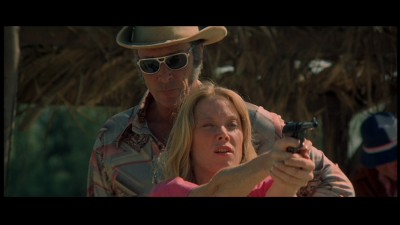 
Criterion had done such a good job on its 2004 DVD transfer, I was shocked to see what an improvement this new AVC/MPEG-4, 1080p transfer is. Any little flickering or blemishes (other than some of the grain that is there as part of the gorgeous '70s-cinema texture of the source elements) that might have been noticeable before are completely gone. Altman's vision, so uncannily expressed through Rosher's desert-lit cinematography, simply glows here.


The uncompressed PCM monaural soundtrack is also a noticeable improvement from the prior edition's sound. The dialogue may suffer the tiniest bit just from the technological limitations of the time--it occasionally sounds a tad tinny--but it is well-mixed in a way that comes through with more than reasonable clarity, and the piercingly high flutes and low bassoons of Gerald Busby's score are richly present, with no distortion whatsoever. This is undoubtedly the best the film has ever sounded. 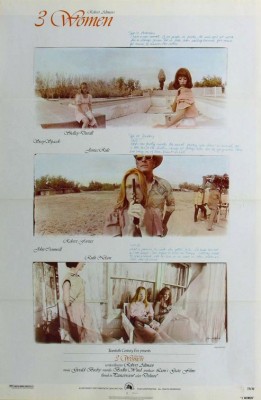 
An Altman commentary is always an experience beyond the film itself; he has done audio commentaries for most releases of his films on digital media, and there have been times (Quintet, for example) when the commentary is more interesting than the film itself. That is not the case with this masterpiece, but his commentary, recorded in 2003, is engrossing, using the film as a starting point (and he doesn't skimp on anecdotes about the production, appreciations and evaluations of the performances, recollections regarding casting, and so on) to go off on some surprisingly engaging tangents about his eccentric, well-articulated ideas of what film is as an art form; ideally, for Altman, it is "painting, with music"--not just in the visual sense, but in the artist's ability to take or leave anything approaching strict narrative linearity and "logic." He analyzes his own film with clear eyes, neither boastfully nor self-deprecatingly. (He discloses that he doesn't much care for the film's dream sequence). There is no "explaining" 3 Women, of course, but Altman's revelations about his inspirations and the work he did on fostering the film as an organic, semi-improvisational, collaborative project are beguiling. This is, in short, one commentary that is well worth the time it takes to switch it on and replay the film.

The supplements also include a huge stills gallery of over 200 production photos; the film's very well-done, unique teaser and theatrical trailers; and two 30-second TV spots. (If there is yet another reason to pine for the long-gone liberationist politics and aesthetics of the '70s, it is that this film--this film--was actually considered worth advertising on television, which would be inconceivable today.) Finally, a graphically gorgeous (typical for Criterion releases) fold-out insert includes an essay on the film by critic David Sterritt.


Altman, Duvall, and Spacek give their idiosyncratic all to 3 Women, Altman's greatest, scariest, funniest film--a tapestry of American-desert existentialism, Jungian psychology, metamorphosing dreamscape, and the director's own special brand of affection for marginalized, flaky, plucky characters. You may find yourself chuckling or scratching your head in puzzlement as you watch it, but you'll be haunted by it long after the film's penultimate line of dialogue, "I'm not going to answer that," sums up its insistence upon the pleasure of the enigmatic and its resistance to any pat interpretation or passive spectatorship. Highly Recommended.