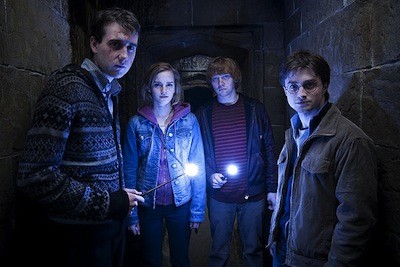 Okay, everyone. You can breathe a sigh of relief. Unclench. The last Harry Potter movie, a.k.a. Harry Potter & the Deathly Hallows: Part 2, a.k.a. Harry Potter 7.2, is good. Really good. Exceptionally damn good, actually. Like, I-couldn't-ask-for-any-better good. The last seven movies have not been for naught, you have not invested your time to only be let down. It's funny, romantic, exciting, heartbreaking, applause-worthy--it's the very model of how a quality franchise should finish. If you weren't excited before, get excited now.

Getting into the plot is pointless: Harry Potter (Daniel Radcliffe) and Voldemort (Ralph Fiennes) do battle on the doorsteps of Hogwarts and the fate of the entire magical world hangs in the balance. Prophecies will be realized, and director David Yates and screenwriter Steve Kloves give it everything they have to bring all the complicated threads of J.K. Rowling's novels to their grand conclusions. It's dark and emotionally perilous and every bit the grown-up movie its predecessor was, with clearly realized action sequences and genuine feeling.

In fact, if I had to choose the series' greatest achievement, it's that Harry Potter has restored genuine heroism to the silver screen, and it's done so without cynicism or calculation. Harry Potter & the Deathly Hallows: Part 2 is a film that isn't afraid to answer a question by having one guy point at another guy's heart. In the end, all the sacrifices made are made for a reason, and the genuine bond that has formed between the characters--and, really, their audience--over the last several entries lends real truth to what transpires. This isn't Green Lantern, where by virtue of getting the right tool, a guy is suddenly a hero. Nor is it Lord of the Rings: Return of the King, where the filmmakers rest on their laurels, letting your prior relationships with the glorified action figures on the screen carry the water; these are fully realized people who think and act. Neither does Yates load up the film with undercooked bombast and then spend the final half-hour patting himself on the back via a seemingly endless string of anticlimaxes. Harry Potter & the Deathly Hallows: Part 2 is solid storytelling, with a tightly wound narrative that--well, I won't say it never lets up. Because the truth is, Yates offers plenty of respite. For an explosive conclusion, it's surprisingly quiet. It's one of the quietest films I've seen in the theater in a long time. Careful when you crunch your popcorn.

I could go on and on here. Analysis at this juncture is pointless: if you're on board, you're on board; if you've been waiting, well, what the hell for? I'm sitting here trying to come up with some faults, but I've really got no complaints. I haven't read the books, so I suppose if I had, I could whinge about the bits and bobs left out, but the best defense against any of that is I haven't read the books and it plays beautifully--something I never thought I would say after the exclusionary experience of the first two installments. Harry Potter has grown into a genuinely effective movie serial. 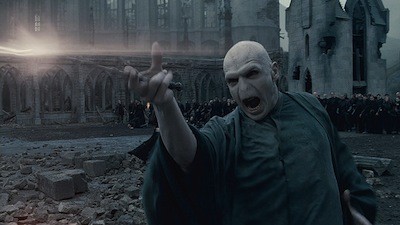 Here are things I liked about Harry Potter & the Deathly Hallows: Part 2:

* All of the acting is really good, from the villains who aren't afraid to put their tongues in their cheeks when required (Fiennes, Helen Bonham Carter) to the supporting players who each get smartly chosen moments as a reward to fans who have stuck by them. Neville lovers should get ready to cheer! And, oh, hey, Kelly MacDonald (Trainspotting, Boardwalk Empire) is in it!

* All three of the main stars--Radcliffe, Emma Watson, and Rupert Grint--have grown from children into smart, considerate performers who take their roles seriously and never coast. Radcliffe in particular handles the gravitas of Harry's decisions with impressive maturity.

* Getting all verklempt in the extended flashback. (I'll say no more. You'll know when I mean.) (Okay. I'll say more. Snape!)

* The special effects are great. There is never a point where you think the production team half-assed it to make a deadline. 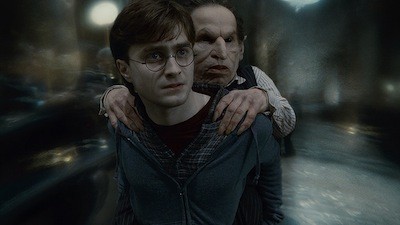 * The caper in the goblin bank is Indiana Jones-worthy.

* The battles are chaotic, but Yates doesn't let his audience get lost in the fight. Even if the forced 3D works counter to his intended goal.

Which, okay, I do have one complaint. 3D sucks. How do we get this message across to Hollywood? This post-conversion b.s. is superfluous at best, distracting at its worst. It draws focus to the wrong places and often makes it impossible to sort out the details. That's when there is any effect to it at all; most of the time, you're just straining my eyes for no good reason. Cut it out!

But that's studio shenanigans, I don't blame David Yates. You can also avoid that problem by just seeing this in 2D, and then you can see just how great the last Harry Potter really is, right to the last drop. In fact, if you really want to know where the folks behind Harry Potter & the Deathly Hallows: Part 2 prove their mettle, it's in the epilogue. I'm told it's faithful to Rowlings' original story, and it's the kind of thing that could have easily been overdone. It could have been too cutesy or grandiose, but Yates never winks at the audience, he just plays it naturally, taking us full circle, pointing to new horizons and the reward of lives well lived. It's a beautiful way to say goodbye. Try not to get too choked up. 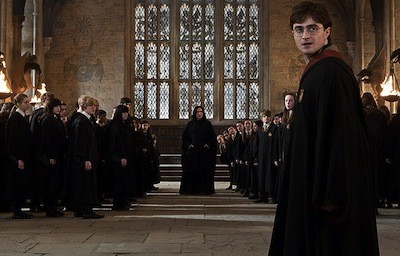