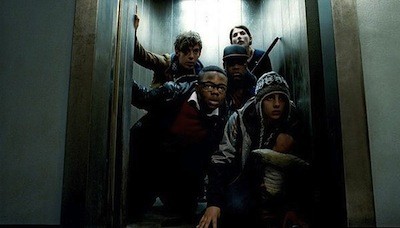 Summer may basically be over, but if you want to have one last fling with your local Cineplex and have a genuine summer-movie good time, then you need to go see Attack the Block. The buzz movie of the season didn't end up getting the full roll-out it deserved during the sunnier months, but it's continuing to expand and find its way to new markets. Cross your fingers it's coming your way.

Attack the Block is a B-movie, but one of the best kind. It wears its intentions out in the open. It doesn't want to be anything but fun, layering on the action, gore, and laughs to create a thrill ride that will keep audiences gripping their arm rests for the duration of the adventure. It's set in a South London housing project called the Ends. It's presumably on Guy Fawkes Night, as the sky is lit up with fireworks and the streets reverberate with explosions. It's under the cover of this celebration that a group of teenagers mugs Sam (Jodie Whittaker), a newly licensed nurse on her way home. The crime is interrupted by something falling out of the heavens and smashing a nearby car. The group's leader, Moses (John Boyega), goes to check it out, and he is attacked by a freaky looking creature with big teeth and no eyes. Moses leads the others to find the monster and kill it. Big mistake.

The same fireworks that distracted from the boys' attack on Sam are also camouflaging an alien invasion. Dark, hairy aliens are dropping from the sky all over the neighborhood. Moses and his crew are the only ones who seem to realize it, and they gather baseball bats, ninja swords, and more fireworks in hopes of fending off the deadly creatures. The aliens look like a cross between the walking apemen in Uncle Boonmee Who Can Recall Past Lives and the stupid, stupid rat creatures from Jeff Smith's seminal comic book series Bone. They have glow-in-the-dark teeth, incredible speed and agility, and a nasty disposition. It's not long before the kids realize they are in over their heads. 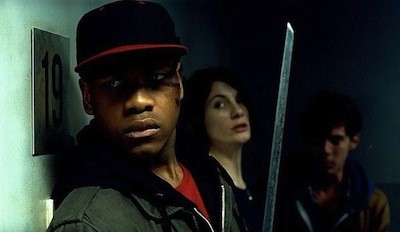 As with any good alien invasion picture, Attack the Block doesn't limit its threat to what comes from the heavens, but it adds in a little tension, paranoia, and hostility down on earth, as well. Moses and the guys are connected to a drug-dealing gangster named Hi-Hatz (Jumayn Hunter), and he wants Moses to start selling cocaine around the Ends. Sam is also working with the police to track her assailants down, meaning her path will cross with Moses and the others yet again, drawing her into the battle against the monsters. As it turns out, Sam is new to the Ends, and she and the teens live in the same building. When one of the gang, a loopy stoner called Pest (Alex Esmail), gets bitten, they turn to Sam for help. Her barriers start to drop as the two sides confront one another about what went down earlier. The best B-movies of the past quite regularly had coded messages within their outrageous narratives, and writer/director Joe Cornish slowly raises questions about class and regimented poverty in modern society. While far from excusing their behavior, he does systematically give humanity to all the characters and let's us peek behind their doors to come to some understanding of why their limited options have driven them to some less-than-savory behavior. The fact that they must fend off the aliens themselves because they can't trust the police to aid them creates a potent image of social disenfranchisement at its most extreme.

Not that these things are overt and heavy handed. Any greater commentary is part of the fabric of the story and necessary to the narrative development, effecting how the characters choose to react and how this crisis will change them. Moses in particular will learn what it means to be a man and how actions have consequences. For as rollicking as Attack the Block is, the film pulls no punches. The danger here is genuine, and Cornish and his team create a lot of grody Fangoria-style special effects to show just what kind of threat these super creeps pose. Though Attack the Block has its origins in drive-in exploitation pictures and vintage sci-fi where space invaders focus on one community (think of the old Twilight Zone "The Monsters are Due on Maple Street"), the take is thoroughly modern. Attack the Block more expertly captures the feeling of an Amblin Entertainment effort from the 1980s than its closest recent rival, the very good, but nostalgia-crippled Super 8. Where J.J. Abrams tried to replicate everything he loved as a child exactly as he remembers it, Cornish brings all of his influences forward, giving them a 21st-century spin, from the bumping electronic score by Steven Price and Basement Jaxx to the very nature of who is teaming up to do the fighting and why. 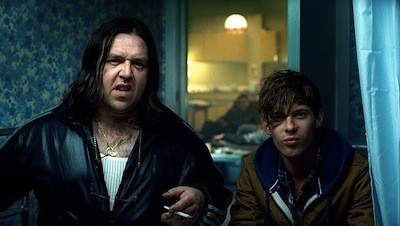 John Boyega is excellent as Moses, a conflicted youth who has learned to act tough in the face of impossible odds, but to single him out does the great ensemble work a disservice. Alex Esmail, Leeon Jones, Franz Drameh, and Simon Howard are all great as Moses' friends. They bicker and banter and shout over one another, sharing the like-mind of a group while also establishing individual personalities. Nick Frost (Paul) and Luke Treadaway provide welcome comic relief as, respectively, a pot dealer and his most involved customer; however, the whole movie is nearly stolen by two nine-year-olds. Sammy Williams and Michael Ajao plays Probs and Mayhem, too elementary-aged wannabes trying to run with Moses and his pack. They have a particularly big moment ¾ in that ends with a pretty great punchline.

The truth is, everything in Attack the Block comes together so nicely, you won't be able to stop yourself from cheering at the finale. This is a flick that hits all the right beats, executing its mission with a stylish fervor and the right balance of excitement, pathos, and humor. It's been pretty heavily hyped in some corners, so it could be easy to get cynical about it, except that Attack the Block is anything but. It's entertainment made by people who love to entertain, and it's to all of our benefit that they've gotten jobs doing just that.