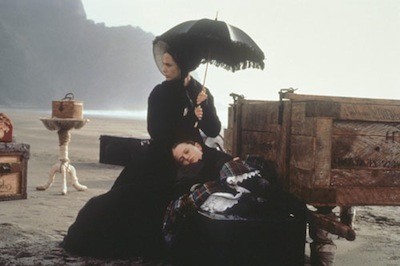 The Piano begins like no other film. A tentative voice begins speaking, setting the scene and establishing the unique narrative point of view by introducing itself as the interior expression of the movie's main character, a woman who has not spoken aloud since she was six years old. It's not as she has ever been heard by others, but how she hears herself. Ada has recently been sold into an arranged marriage, and she and her young daughter are being sent far away to New Zealand to live with the new husband. Whatever suffering our heroine must endure, she can face it as long as she can bring her piano, which for her provides a precious means of expression. Though she knows sign language, her separateness has allowed her to ascertain that most people don't use their words for anything of significance. Music need not justify itself, it only need flow from the instrument.

Released in 1993, Jane Campion's romantic story of perseverance and self-actualization was rightfully greeted as cause for celebration. Critics and audiences both embraced The Piano, and it was a mainstay at all the year-end award shows. Holly Hunter won a Best Actress Oscar as the star of the film, playing silent Ada with incredible insight and physical acuity; her young co-star, an 11-year-old Anna Paquin (now on True Blood), also took home a Supporting Actress statue. The pair were perfectly believable as mother and daughter, just one of the many carefully arranged elements that lent Campion's film an emotional honesty that has not dimmed in the decades since.

When Ada and little Flora end up at their remote destination, their new lives look bleak. Alisdair Stewart (Sam Neill, Jurassic Park) is a nervous, socially awkward man who is more at ease bargaining for land than he is at exchanging pleasantries with his new wife. To be fair, Ada is not exactly as she was described to him, nor does she make things easy for the inexperienced groom. Her piano is a particularly burdensome piece of luggage, and it has to be left on the beach. Alisdair has not brought enough Maori workmen to carry it back up the mountain.

Eventually, Ada turns to a neighbor to help her with her predicament. George Baines (Harvey Keitel, Thelma and Louise) is friendly with the locals and served as translator and guide on Ada's journey to her new residence. George apparently left a wife in England, but whatever drove him halfway around the world is not revealed. He has taken to his adopted home to such a degree, he has even tattooed his face in the Maori style. He buys the piano from Alisdair under the guise of wanting to learn to play music, but in reality, he wants to use it to bargain with Ada. If she will engage in increasingly intimate acts with him, he will return the musical instrument to her.

Though begun as a simple supply-and-demand transaction, the relationship between Ada and George grows increasingly complex. The Piano is a literary romance filled with potent symbols and expressive metaphors. Of all the players in this love triangle, Ada is the one who communicates most directly, and her methods draw George out of his shell while further alienating Alisdair. In turn, Georges' care inspires new feelings of trust in Ada, as well as bringing other sensations to her life. The basic plot of the film is a series of seductions, some selfish and some transcendent. Georges reveals hidden kindnesses, Alisdair unveils unforeseen cruelties, and all are watched by the eyes of a child, who serves as both provocateur and conscience. For Ada, she is the angel on her mother's shoulder insisting she make the moral choice, only then to flit off to her stepfather and whisper devilish gossip in his ears.

Anna Paquin delivers an unpretentious, unmannered performance as the little girl. Campion (whose other credits include Sweetie and Bright Star) has clearly connected with the young performer's sense of play, getting her to engage wholly with the space. She never appears as anything less than totally immersed in the scene, and her naturalism challenges the adults to match her instinctual gifts and also gives them the sense of "other" that they can play off. Flora doesn't understand everything that is going on with the grown-ups, and it lends even more intensity to their deception. As George, Harvey Keitel is both primitive and surprisingly modern, displaying a sensitivity that Ada can't help but respond to. For his part, Sam Neill appears as a man haunted by his desires. His wife's touch, reaching so close to forbidden areas, sets him atremble; yet, she refuses to let him touch her in return. Ada commands both of them, but Holly Hunter is careful not to let the character's stubbornness be so pronounced that we lose sight of her vulnerability. This is a woman whose life has been overtaken by something she can never put a name to, and so she can never be completely in control.

The Piano was shot on location in New Zealand, and cinematographer Stuart Dryburgh (The Painted Veil, The Tempest) makes great use of the open, natural landscape to be found there. Shots of the seaside are breathtaking, with Ada and Flora placed between the mountainous terrain and the vast ocean, emphasizing their isolation from their former lives. This also means that "civilization" as they've defined it is a distant thing. They are now surrounded by untamed jungle, creating an environment where they are sufficiently hidden away to indulge in passions they'd not be allowed back home. (For her part, Flora becomes a bit of a wild child, left to her own devices, which ironically also forces her to be more of a grown-up.)

Of course, no review of The Piano would be complete without also making mention of Michael Nyman's score. His music is beautiful without being intrusive, his incidental compositions taking a backseat to Ada's emotional sessions at the keyboard. When she starts playing, the music pours out of her. As another character describes it, it's like when a mood takes you and refuses to let you go. It's another of Campion's perfectly considered metaphors. Only Ada allows herself to feel this way, the others find her music strange--though ultimately, it does soothe the savage beast. The piano's central position in Ada's life is both a great asset for her and a curse, and it's one she will have to contend with before she can ever truly live.

Video:
The 1080p, 1.78:1 widescreen transfer on The Piano Blu-Ray yields mixed results. While the overall picture is clean and the colors are nicely rendered, the resolution is inconsistent. At times, the image looks remarkably detailed, with sharp edges and evocative textures. At other times, the image grain becomes so pronounced, the picture underneath starts to look muted, with less distinct outlines and some splotchiness in the coloring. This could be a byproduct of the cinematography, since the film's climactic underwater scenes benefit from the increased grain, but there doesn't appear to be much rhyme or reason to it in the earlier sequences. These things aren't really distracting, by any means, but worth mentioning all the same.

Sound:
Surprisingly, the original soundtrack is presented in 2.0 surround, remixed in DTS-HD Master Audio. The audio is pretty good, with excellent volume and no distortion, but it seems like a missed opportunity. It's not just The Piano's reliance on music that would make one think that a 5.1 audio track is in order, but the ambient noise evident in the jungle scenes, as well. There is a real opportunity to create a strong audio experience here, one that could put the viewer deep into the exotic locale, but I guess no one wanted to go for it.

There is an optional closed-captioning track for English speakers, as well as regular subtitles in English and a set in Spanish.

Extras:
Just the theatrical trailer for The Piano, as well as other trailers for Miramax films being released on Blu-Ray by Lionsgate.

FINAL THOUGHTS:
Recommended. This is a case where the movie actually comes "highly recommended"--and indeed, is basically essential for any mature fan of serious-minded contemporary cinema--but the Blu-Ray is underwhelming. We're far enough into the high-definition experience now where an average-looking upgrade doesn't really sell itself the way it might have once; likewise, there is a notable absence of bells and whistles in the supplementals, as well. That all said, The Piano should also be a film that transcends its delivery method. Jane Campion's 1993 drama is a poignant tale of human expression, with remarkable performances by Harvey Keitel, Anna Paquin, and Holly Hunter. The Piano is both challenging and moving, and worth many repeat viewings.