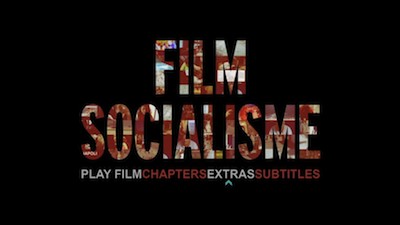 Jean-Luc Godard's new cinematic essay, Film Socialisme, his first major new work since 2004, opens with the image of a roiling sea. The water looks black, almost like oil, a visual juxtaposition that is clearly intentional, as the first subtitled narration is three choice words: "Money Public Water." It's an intentionally vague statement, a provocation from a master provocateur. But as where that term has become a negative referring to empty sensationalists, the great French filmmaker is working on a whole other level. He wants to stimulate political discourse through cinema. He is poking at your brain, not at your libido.

The darkened ocean is not actually the first image in Film Socialisme. That is actually the short flash of two brightly colored parrots that appear just before the start of the credits. This is likely meant to be a joke, Godard the prankster poking fun at the chatter that is to follow. Film Socialisme is not a narrative film, not in any conventional sense. It's also not a documentary. It's more the latest fruit born of an ongoing experiment that the director has been engaging in since his first feature, Breathless, more than 50 years ago. Godard structures Film Socialisme as a three-point argument. The first segment takes place on a European ocean liner, with Godard's camera following passengers, young and old, on their journey of never-ending pleasures, from buffet to nightclub and back to the buffet again. 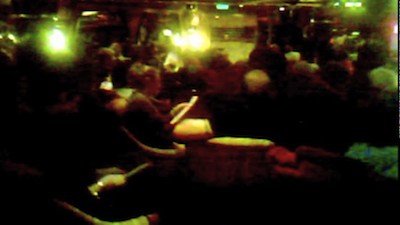 The travelers are of every stripe and every nation, the cruise ship is world culture in microcosm, bringing us all together (a major theme of Film Socialisme), even if it's just for banal synchronized dancing. Shot in digital, the images range in quality from beautifully realized high-definition to cheap and pixilated. Godard and his team both observe the unaware and track specific characters, all the while using their monologues and disconnected voiceover to cover a range of topics, largely centered on the self-absorption of modern culture, sins of the past (Germany, Moscow, and Israel/Palestine are regular targets), and the role of popular art in curtailing man's self-destruction. Amongst the invented personas are also real people, including musicians Patti Smith and Lenny Kaye and economist Bernard Maris. 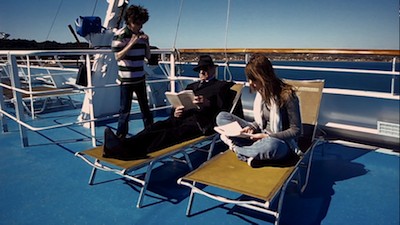 This initial portion establishes Film Socialisme's difficult aesthetic. It's not just the images that are disjointed--there is no such thing as a "complete" scene here--but also the spoken word. Or, more specifically for English speakers relying on subtitles, the written word. Godard has chosen to make Film Socialisme even more challenging for his Western audiences. Rather than subtitling every word you hear, he has chosen to translate the material into "Navajo English." The name is a rather risky joke, referring (one assumes) to the style of broken English spoken by Native Americans in old Westerns. Thus, something like, "I am hungry, and I want to eat" will instead be "Me want food." While Kino Lorber has offered a fully translated subtitle option on their home video release (as well as the choice of none for those who speak the multiple languages heard onscreen), to go with those almost seems like a cheat, like watching Memento in its chronological order. Film Socialisme is a leading puzzle that beckons the viewer to follow the fractures and divine his or her meaning from the clues left along the way. The incomplete subtitles add another layer to what is being shown. The combination of words can be perfectly clear at times, but they can also be laced with a double meaning, loaded with ironic context or sharp political rhetoric.

The second part of the film leaves the cruise ship and goes to a small, family-run gas station that is struggling to survive in the lopsided world economy. The politically minded nuclear family is being visited by a film crew who are, for all intents and purposes, shooting a film within a film, though often to the reluctance of the subjects. Some of what they capture is "documentary," some of it is purposely staged; yet, Godard suggests that all culture is now imitation. The young son of the family is a bit of a precocious prodigy, mimicking orchestra conductors, blowing his straw like a saxophone, and painting his own version of Renoir masterpieces from memory. While his family worries about money and the possible change in public policy due to an upcoming election (one which family members are also candidates, so threatening domestic policy, as well), the boy worries about not revealing where his talents come from. That, and the camerawoman's posterior. (Oh, Godard, you rascal.) Social change and governmental policy are all theatrics; there is no longer a line between the authentic and the contrived. 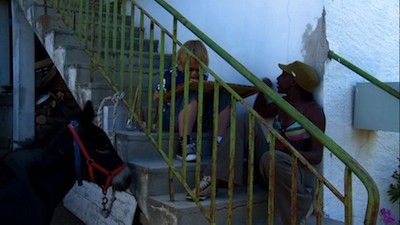 The last third of the film shifts completely from any pretense of traditional storytelling and becomes full-on collage. This, one could surmise, is really the meat of Film Socialisme. Godard begins the segment with footage of the cruise ship landing, as if to suggest that we, as an audience, have finally arrived at our destination (being, of course, all in this together; entertainment is the truest form of socialism in current times). Using archival footage from news networks, historical records, and old motion pictures, Godard lays out a history of war and oppression, touching again on Palestine and Nazi Germany, as well as military dictators like Stalin and Franco, not to mention dialing all the way back to the origins of civilization itself. Title cards and an alternating male/female narrative team (those parrots from the opening?) explain, in their way, what we are seeing, working with the visuals to build to a crescendo of stimuli. The last words of the movie are "No Comment." Again, this is loaded with meaning. It could be that Godard has no more to say and no intention of explaining himself, or perhaps it's really a comment on the film audience at large. We passively view our blockbusters without ever asking what price we pay as a species by not demanding more of what is easily the most influential and potent art form of the past 100 years.

Make no mistake, Film Socialisme is not going to be to everyone's liking. It's intentionally hard work, and it requires the viewer to accept and go with its strange and often maddening flow. The closest thing I can liken it to in recent memory are the seeming tangents of Malick's Tree of Life, the segments showing the universe being born and developing that on first blush might come off as the worst kind of self-indulgence. In both cases, however, for those who want to give it a go, there is far deeper and satisfying treasures to be found by jumping in and digging through the primordial ooze. You might not "get" either the first time--I just wrote 1,000 words about Film Socialisme and I don't even really get it--but nothing that is truly enriching ever really is. Getting there requires a little faith in the artist, and also in yourself. 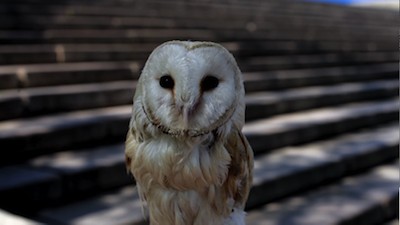 Video:
The widescreen anamorphic transfer of Film Socialisme is shown at a 1.85:1 aspect ratio. The digital authoring here is fantastic, with detailed colors and strong contrast between the shooting styles. Knowing Godard, he likes how horrible some of the images look (and particularly, I am sure, how they sound), and the fact that the frame looks so crystal clear even as it's breaking down serves the purpose of the auteur in surprising ways.

Sound:
Film Socialisme's original, multi-lingual soundtrack is mixed in Dolby 5.1, which could almost seem like overkill given the nature of the audio. The added channels serve to give the soundtrack additional heft. Godard's employment of music and words sounds powerful at increased volumes, and though there aren't a lot of obvious interspeaker effects, you will notice a subtle balance between the voices, particularly in the final third when the narrators trade lines. Listen carefully, and you will hear the soundtrack tip from right to left. The audio is beautiful where intended, as well as grating when Godard employs natural distortion to assault your ears. The differences between the pleasant ocean sounds and the harsh winds that mess with a crappy microphone are vast.

As noted above, there are two subtitle options: Godard's select English translation, which was how Film Socialisme was shown theatrically, or the full English subtitling. Or, you can go crazy and turn them off completely! Read Christopher McQuain's review of the Blu-Ray for the analysis of someone who went all the way through with the full subtitles and his take on what option to choose. (The little scamp doesn't admit he speaks pretty good French, too, so he already had one up on me!)

Extras:
There is a trailer for Film Socialisme (presumably cut by JLG himself?), as well as for other Kino Lorber releases, and a stills gallery from the production. There is also an informative essay by Godard expert Richard Brody included as a printed pamphlet inside the DVD case. This is great reading either before or after you watch the film. I read it after writing this review, and Brody explains a ton of details I would have never gotten to on my own. It made me want to speed up my eventual second viewing, and now I'm weighing whether to try the "Navajo" again armed with Brody's decoder ring, or give in and accept the full subtitles.

FINAL THOUGHTS:
For adventurous cinephiles and, of course, Jean-Luc Godard fans, Film Socialisme is Highly Recommended. This puzzling and dynamic cinema provocation is not going to find any crossover success, but it was never intended to (ironically, given its themes of unity). If you're of the sort inclined to such things, you'll want to dive into Film Socialisme and see what pearls you can carry back to the surface. Some of you still may not care for it, but that's okay, you still want Film Socialisme on your moviegoing resume. If you aren't a regular viewer of avant-garde cinema and you read all this and aren't sure whether you should try it or not, I say go for it. Let Film Socialisme be your baptism of fire. At the very least, it will change what you think movies can do and make you watch whatever is next in your queue with an altered eye. On the other hand, if you think all the words that preceded this last sentence are pretentious nonsense, Film Socialisme is not for you, which is perfectly fine, but then why on earth did you keep reading all the way to the bottom of this page? 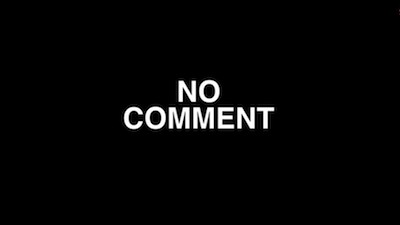