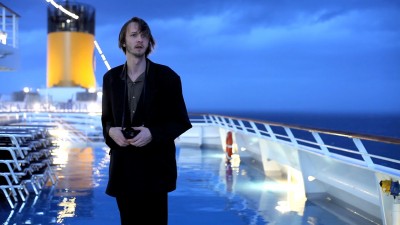 Please Note: The images used here are promotional stills and are not taken from the Blu-ray edition under review.

There is a scene in Godard's turning-point 1965 film Pierrot le fou in which stars Anna Karina and Jean-Paul Belmondo perform an impromptu "play" for American tourists in which an event as vast, urgent, and serious as the Vietnam War--including all its horrible violence, the conflict of international attitudes around it, and Godard's own impassioned opposition to it--is meant to be summed up, allegorized in a provocative manner bluntly dismissive of subtlety in favor of pure didacticism ("pure" being the operative word; even from the beginning, Godard was profoundly ambivalent toward the obfuscating, in his eyes potentially impure function of naturalistically telling a story the way most narrative features do). This play is an archly fascinating, impudently alienating peak in a film that saw Godard relentlessly taking his long-running questioning of realism, naturalism, linearity, or plot/character-centrism to new extremes, and an indicative pointer of where the director would take his restless creative energies in the future. The ensuing decades would see him losing many more fans than he gained as he stubbornly practiced varying degrees of rejection and line-blurring when it came to even the cleverly/subversively told stories he started out telling, let alone anything approaching conventional movie storytelling, with its dedication to cause-and-effect chains of event and characters with identifiable, consistent psychologies and personalities. He opted instead for an approach to cinema radically dependent upon collage, monologue, alternations of documentary and painterly compositional techniques in the visuals, and jarringly (yet refreshingly) disjunctive experiments in sound and editing. With his latest film, the prismatic, technically ingenious and voraciously philosophical and political Film Socialisme, the Godard born with Pierrot le fou and growing through subsequent, increasingly divisive offerings like La Chinoise and Le Gai savoir has arrived at a new point of maturity. The film once again demonstrates that those (including the director himself) who have since the beginning of his career characterized Godard as more of an essayist and critic than a storyteller have always been on a more fruitful track than those who have painted him as just a cheeky postmodern homage-payer or Pop artist; this is film not as storytelling or entertainment (or even, as in most documentaries, information) but as heady meditation and insatiable analysis and reanalysis. 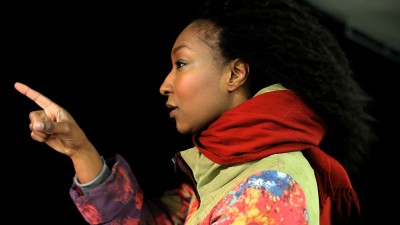 If many of Film Socialisme's techniques--its assaultive-by-principle editing, its interposing of gnomic titles, and its incorporation of multiple outside cinematic, literary, and musical texts into the vast tapestry of the proceedings--are familiar from Godard's dense, brilliant documentary/poem Histoire(s) du cinéma, its structure is recognizable (as it was in his last feature, 2004's Notre musique) as a triptych, its three parts complementing and playing off of each other. Whereas Godard borrowed Notre Musique's three "levels" from Dante's Divine Comedy (with its Inferno, Purgatorio, and Paradiso), the three-part movement of Film Socialisme seems not so much a progression from low to high as one that thematically shifts from quite a wide perspective in the beginning, to local/domestic close-up in its second/middle part, then back even farther for the final third's panoramic survey of Western civilization from its inception. The first part takes place on a cruise ship that, like Europe as Godard sees it (the metaphor becomes increasingly clear), is adrift on a mindless pleasure voyage leading disconcertingly to who-knows-where. The ship's various passengers are not characters; they are idiosyncratic fragments from Europe's abyss-like 20th-century history personified, from a Kipling-quoting old British gentleman with a handlebar mustache to a Palestinian refugee trying to return to Haifa to a young African immigrant who claims that AIDS is a plot to "wipe out the blacks from the continent" to the Russian woman obsessed with the controversial "Moscow gold" of which only a part was received by the Soviet Union when sent by Spanish revolutionaries, to an expatriate American musician (played, quite naturally, by Francophilic American rock goddess Patti Smith) along for the creatively enriching ride. An intertwined story of a watch stolen from an older passenger by a child could be interpreted as a reiteration of Godard's long-running trope in which open-minded, experimenting, curious young people are the ones to be entrusted with History, not their blinded and calcified elders. 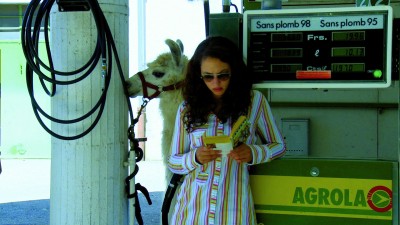 The watch returns in the film's more "dramatic" second part, set at a family-owned gas station somewhere in rural France, where the proprietary family (a mother, a father, a Balzac-reading teenage girl, and a tow-headed moppet in a bright-red T-shirt featuring a hammer-and-sickle graphic) has decided to form a microcosm of democracy and put the children in charge, an experiment that has drawn the unwelcome eye of French TV news, from which a reporter and cameraperson have been sent to hover around and provoke the family (whose reactions to the intruction range from reticent to disgusted) into sharing their story with the public--a story that will, naturally, be "edited for TV." It is the little boy who possesses the watch, which leads to a concluding discussion between him and the TV cameraperson on the nature of time and History. This in turn segues into the film's final, most "essay"-like portion, a montage of still photographs, paintings, and film clips (as well as some haunting music and the same titles that, typical for Godard, have been cut in throughout, cryptically labeling various scenes with phrases like "things like this") that breaks down into sub-sections centered on six places (were they also the ship's destination(s)?) prominent in the history of Western culture: Egypt, Palestine, Odessa, Hellas (Greece), Naples, and Barcelona. The film then ends on a title card reading "No Comment." 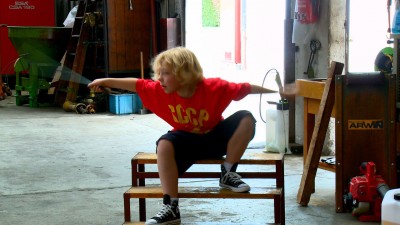 Godard shot Film Socialisme on at least a couple of discernibly different types of video, each of which he gorgeously, expertly exploits for its particular properties of color and texture, ranging from blur and garish hues in the lower-grade video (frequently used to capture the disposable onboard-entertainment activities of the ship's passengers) to sharp, hyper-defined, magnificently deep-focus high-definition compositions. (The first thing we see after the film's title appears is a jaw-dropping, stark, screen-filling visual of white ripples against an undulating backdrop of black sea--one of the film's many indelible images, and reminiscent in its glorious abstraction of the legendary close-up inside a coffee cup from Godard's 1966 film 2 or 3 Things I Know About Her.) In terms of its philosophical point of view, Film Socialisme is indefatigably materialist and historical, and thus 180 degrees from Terence Malick's metaphysically-minded Tree of Life, but the rare quality that these two films have in common is that they are first and foremost tactile experiences; their image and sound, their qualities and shifts and juxtapositions, are equally important, if not much more so, to any dialogue or story. This is particularly true in light of the fact that the "dialogue" in Film Socialisme actually consists mostly of quotations juxtaposed like objects with both each other and the physical things with which the film is replete (a couple of dozen names are credited in the opening titles under the Greek rubric "textos"-- Joseph Conrad, Claude Lévi-Strauss, Heidegger, Sartre, André Malraux, Hannah Arendt, and La Rochefoucauld among them).

This all makes for an experience one will find either enticingly immersive, exciting, jam-packed with interest, and well worth the required concentration and effort of comprehension, or irredeemably cut-up and purposely inscrutable, even pretentious (obviously, I fall into the former camp). But what could likely be agreed upon more or less objectively is that it is a) galvanizing and b) unfailingly true to its author's voice, however many other voices are channeled therein, and at however rapid-fire a pace. Which is to say that it is very successful on the terms that all the work of late Godard sets for itself, and one's perception of its success will depend pretty much entirely upon whether it is eager anticipation (or dread) inspired when one sees those words, "late Godard," but for those who can appreciate the continuity that really is there from beginning to end in Godard's filmography, it is perhaps the ultimate payoff to the promise the great cinéaste made when he first disrupted cinema's party with Breathless 50 years ago. 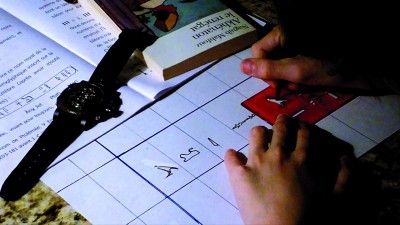 
The AVC/MPEG-4, 1080/24p, 1.78:1 aspect-ratio transfer is perfect. Visually speaking, Film Socialisme is extremely idiosyncratic, engaging with several grades of video technology, from hi-def to cellphone, but it all looks glorious here. If Godard's visual-aesthetic aim, as one would guess, was to make tangibly present the singular imagistic properties exclusive to this or that form of videotape (a certain jitteriness, blurriness, or stutter included as they arise), this presentation stays blissfully true to it.


No less special is Godard's manipulation of the aural dimension, of which he has long been a renegade master. Voice-overs fade in and out from left to right speakers, for one example. The distorted, garish video of the ship's hellish nightclub is accompanied by extremely harsh sound, distorted by bass almost beyond recognition into a whole other cacophony appropriate to Godard's take on the scene; sound drops out completely after one character says to another, "silence is golden" (in a self-homage to a similar silent stretch in his own Bande à part?); and the distinctive noise of wind coming off the sea almost becomes its own character . In other words, the film has an incredibly complex, demanding sound design, but Kino's marvelously faithful and meticulous DTS-HD Master Audio 5.1 presentation of it is entirely up to snuff.

Also, a note on the soundtrack vis-à-vis the subtitles is in order. The film is multilingual, and it was originally released with what Godard called "'Navajo' English" subtitling--fragmented English phrases approximating what is being said in the film's various languages. The disc comes with the option of no subtitles, the theatrical subtitles, or the "full-English" subtitles, and having watched the film in its entirety with the full-English subtitles and in part with the "Navajo" English version, I can say that they are two distinct experiences, but those whose first language is English could be forgiven for "cheating" by watching the full English subtitled version and then going back for the "original" version, though it should also be said that you won't miss anything absolutely essential either way, as any function of dialogue is definitely subordinate to the images and other sounds.


Probably the most in-depth, usefully contextualizing extra is the four-page booklet insert, which contains an invaluable review by Godard expert Richard Brody, author of Everything is Cinema: The Working Life of Jean-Luc Godard. Other than that, there's not too much (one wouldn't expect Godard to provide some kind of puzzle-solving commentary, right?) aside from the film's fantastic theatrical trailer (which, on closer inspection, actually seems to contain the entire film fast-forwarded to the accompaniment of a beautiful piece of music for strings and organ also heard in the main feature), a stills gallery capturing some of the film's most striking visual moments, and a handful of trailers for other Kino releases like The Robber and Rapt.


As classically beautiful as an Edward Hopper painting and as sharply modern as a cell-phone-video art installation, Film Socialisme reveals the intellectual questing and artistic restlessness of Jean-Luc Godard to be more vigorously alive in him than ever, despite his having just turned 81. Everything in the film--from its maximized-beauty images to its editing techniques (both sound- and vision-wise) and "narrative" structure--is confounding and wondrous, its "meaning" oblique, suggestive, and elusive, its "genre" Godard's own trademark hybrid of documentary, fiction, music, historiography, poetry, and essay, but its actual visual and aural presence inexorably bracing and elevating. It is a far-reaching, exploratory, and fragmented experience, each piece gathered and formed in juxtaposition with the others for maximum impact, and that means it's never directly relating information or telling a story; it's using the cinematic medium to create a heady, sensuous experience that will, if you get on board, captivate you and set your neurons ablaze in a way that no blockbuster action spectacle ever could. Highly Recommended.